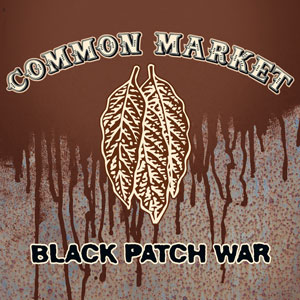 “All I’m askin for is fair market at the auction
I put my work on the block, give me my portion
A good return and if not, I put the cross on ’em”

Mind you that’s not “cross” as in crucifix, that’s “cross” as in crosshairs. Common Market seem determined come hell or high water to get noticed on the hip-hop landscape, but they actually don’t have that much to worry about. Sabzi should already be a familiar name to the underground thanks to his role in Blue Scholars and rapper RA Scion can rest assured that Common Market’s work has been reviewed here before. In fact Arthur Gailes gave them a coveted score of straight 9’s across the board – that’s pretty high praise for your first mainstream release let alone first CD to get ink on this website.

With only seven tracks on the “Black Patch War EP” there’s not nearly as much material as I’d like for two reasons – I’m unable to dig as deep as Arthur did on his review and what little is available here is good enough to have me craving more. The production on “Watership Down” reminds me of 9th Wonder for all the right reasons – ethereal echoing voices in the background, drums and hi-hats crispy enough to be served with corn and biscuits, and lyrics that are as well thought-out as they are smoothly delivered. Gailes said it best in his review: “his diction is flawless, and his word choice is superb.” I can find no fault in Scion’s delivery either. He may be borderline to being MC Chris nerdy but the breath control he displays on “Red Leaves” could put both Eminem and KRS-One to shame.

By the time this short but funky EP comes to a close on the smooth finale “Bonanza,” the loping groove and impressive phonetic skills will bring a world of comparisons to mind – Blackalicious, The Roots, Sage Francis, or perhaps all of the above. You wouldn’t think of this duo as being overly spiritual or religious, but according to the Common Market one sheet the members met because of their shared Baha’i Faith. If that’s the case I hope more hip-hoppers get down with their form of religion, because “Black Path War” awakens an entirely different spirit – the old fashioned spirit of fresh beats, scratches and rhymes done for the love of the art first and the paycheck second.