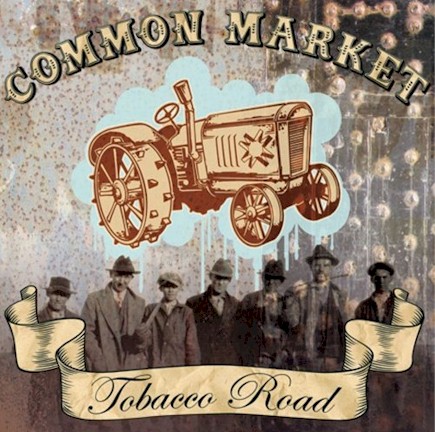 This is the kind of food that the RapReviews behemoth feeds on; the type of liquor we drink up with pleasure; the kind of type of tobacco we blend with our Pineapple Express… The full-length sophomore from Common Market – the dynamic duo consisting of Scion (the MC) and Sabzi (the music machine) – is finally here, and it is safe to say that they have already received some glowing praise on these glistening pages. With a debut LP that was ordained a classic (that seriously hardly ever happens on this site) and an EP that seems to have made people go officially crazy, it creates a certain amount of pressure – but one that CM seem to thrive on.

“Tobacco Road” is, without doubt, an ambitious, sprawling effort. Spread over eighteen tracks, the result is an extremely dense forest of similes, metaphors and meticulously pieced-together instrumentals. In fact, the attached blurb advises repeat listens, and for once, their propaganda is fully justified. The first time you listen to “Tobacco Road,” it may well wash over you to an extent; but persevere, as there is much to glean from various angles.

The main selling point of the album is probably meant to be Scion and his lyrical dexterity – more of that later. For the moment, however, the music deserves the limelight – Sabzi is a highly talented producer. On multiple occasions throughout this broad soundscape, he knocks out some excellent beats – and all the music theory students out there (for I know there are many) would have a veritable feast dissecting the immaculate way in which he constructs them. From the sturdy organ-grinding opener “Trouble Is,” to the jazzy Primo-esque “Back Home (The Return),” here is a man with mastery over the keys. The string section is up next, with the stunning “House,” and the Detroit sound gets a thorough workout on “Nothin’ At All.” Aside from the awful sounds underpinning (or undermining) “Gol’Dust,” Sabzi as the producer holds the fort down with great aplomb, and surely higher levels of recognition await him.

Whilst everyone and their dog seem to be thoroughly impressed by the MC, Scion, I guess I’ll have to pipe up as the sole dissenting voice. “Tobacco Road” is an excellently put-together album, with the underground in particular sure to love various aspects of the opus (and, of course, the beats). But how they could love Scion remains beyond me. Don’t get me wrong, he is a verbose MC with many a talent – for instance, his chorus singing voice is appealing, and he can fit many a word into a jam-packed couple of bars. Something, however, is completely off about him. Firstly, his flow is, in my humble opinion, shockingly bad – perhaps he is over-stretching himself on this LP, like a quarterback going for too many long-range glory passes, but he doesn’t seem to understand the concept of “flow.” His idea of injecting character into his delivery tends to consist of his one-trick pony way of undulating his cadence, and it quickly becomes grating. As for the words, perhaps they may be impressive when written on paper; but when spat out loud, they sound clumsy, excessive, an ill fit for the tempo of a track. Thus the concepts begin to drown in a sea of “let-me-see-how-many-words-I-can-cram-into-this-bar.”

Of course, some of you out there will strongly disagree, citing Scion’s lyrics as “impressive.” However, being “impressive” is all well and good – but if your delivery of those lyrics is substandard, there is little point. More than this, the CONNECTION to the listener risks being lost if you can’t make them FEEL what you are trying to get off your chest. I’ve listened to this sophomore effort a great many times – but I don’t need to be impressed, I want to connect. Yet I feel no connection. On this count, Scion undoubtedly fails, thus letting his production partner down. Fans of their first album will, almost certainly, like “Tobacco Road” – but the failings of Scion, the MC, mean that this one will go up in smoke, devoid of the more addictive properties that “Tobacco Road” could have held.