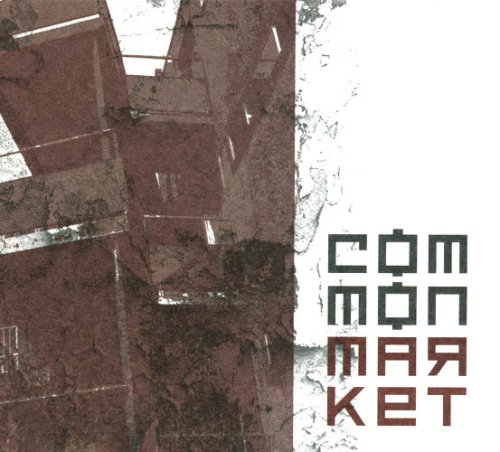 Comprised of RA Scion (rhymes) and Sabzi (beats), Common Market represents a huge step sideways from most modern day rap music. Both together and individually, they remove the gloss and shine so often seen in mainstream hip hop, eschewing its superficial qualities for a more measured musical approach that is at once simple and complex.

Simple, because of Common Market’s refusal to bend to any aesthetic but their own. With the only guest (Geologic of Blue Scholars) on the bonus track, the remix of “Every Last One,” the artistry of Common Market is never compromised, nor expanded beyond the premise of its two creators. Sabzi, especially, revels in his chance to shine alone, gently placing short samples of saxophones, guitars, vocal loops, and even his own piano playing over his agile drums and claps. By his will, the beats can groove or bang, and most importantly, they fit Scion like a glove.

“Deep breath, I request a requiem for apathy
Momentarily lost hope, but now it’s back in me
Temporarily felt defeated by the game
Then the light came just after the nightingale sang
Thank whoever you wish for the gift received
I let it be the definition of me, the emcee”

Though Sabzi’s production is consistently stunning, creating a number of opportunities where a lesser MC would relax, Scion’s attack is relentless. If Sabzi’s production is the draw-in, instantly grabbing your attention, it’s Scion’s lyrics that hold “Common Market” up to repeated listens. As becomes readily apparent on the introduction, “Re-Fresh” (quoted above), Scion is gifted with an uncanny ability to bend the English language to his will. Without losing the impact of his words he fits them with Sabzi’s beats, hitting the consonants directly on the drum and bass notes, never overshadowing the production, but blending in with it.

And through their willingness to compromise their own individual brilliance, “Common Market” becomes a stunning overall composition. It can effortlessly transition between the smooth, funky grooves of “Trinity” to the atmospheric bangers like “My Pathology” without either member hitting a snag. Flowing together, Sabzi blazes the trail for Scion, who is flawless in delivery and diction, never rapping over the beat, but flowing with it, as they have their best performances together. Sabzi’s production not creates the sound, but inspires Scion’s themes, as he adopts a more emotive lyrical style over the jazzy, snapping sound of “Keep Track”:

“Allayed by the shadow of shade â€“ light’s oppressive
Afraid the test is only a grade â€“ the sum of digits
Betrayed by the master of slaves; the antiseptic on blades
Teach ’em a lesson; the maze â€“ come and get it
Pronounced by the Duke and the Count to be the promise
Announced â€“ I’m assigned to the house â€“ repute’s illest
Surmount the opposition and bounce â€“ a man of modest accounts
Hierarchy trounced when I shoot to kill it”

While the emotion, talent, and sincerity of its creators is well communicated through its tracks, “Common Market” is not a flawless effort. Sabzi is a great producer, but his do seem to be somewhat limited by having to cater to RA Scion. “Kampo,” the lone track without any vocals, achieves a level of melody and harmony that isn’t seen anywhere else in the album. His production functions extremely well as a focus or an accompaniment, but it seems dulled by being relegated to such.

But RA Scion deserves the spotlight, as he is a remarkable rapper. As said, his diction is flawless, and his word choice is superb. His rhymes come at an amazing pace within the lines, and yet are subtle enough not to take away from the point of his verses; as great of a lyricist as he is, his words are more focused on his spiritual and political opinions. Even while dissing “Succor MC’s,” over Sabzi’s layered piano notes and vocal loops, makes sure you aren’t “afraid to raise your fist.”

But like many spiritual and socio-political rappers, Scion occasionally falls victim to being overly pretentious. He’s not arrogant about it, and it doesn’t happen much, but the times when he commands his listeners on the way they should live their lives are a little too heavy, although the more brooding songs like “Connect For” moderate this excellently while still challenging the listener. There’s nothing wrong with believing your view is the right one, most do. The problem lies in preaching to people that their way of living is spiritually wrong. Scion even addresses this in “Push” by being willing to challenge even his own beliefs.

Even with these minor faults, “Common Market” is a stunning effort, an album that simultaneously harkens back to a simpler era of hip hop, while relentlessly pushing this one forward. A spectacular success, “Common Market” is a must-have for any hip hop fan, one of the most musically inspiring rap albums of this decade.