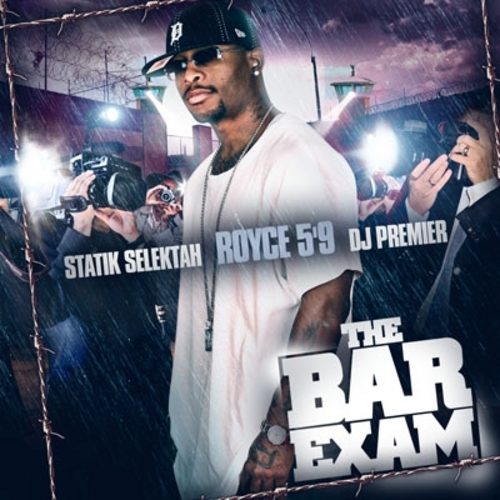 Royce da 5’9″ is one of those artists who simultaneously have a very large and very small catalog of work. Coming up in the Detroit hip hop scene of the late 90s, Royce has performed on many songs with other Detroit notables and put out numerous mixtapes. However, he has only really released two proper albums on his own â€“ “Rock City (Version 2.0)” and “Death Is Certain” â€“ with a number of other independent releases that felt more like group efforts with his M.I.C. crew.

“The Bar Exam” is another mixtape by Royce, with assists from Statik Selektah and host DJ Premier. As usual, this release finds Nickel Nine spitting venom over a pretty solid collection of beats. This is a true mixtape, and on it Royce rhymes over a number of already used tracks. You won’t be mad at it, though, because the beats he chooses to reinterpret include some classic Premier cuts that will never get old. On â€œRoyce Is Like,” he flows over classic tracks by both Nas and Jay-Z and proves himself more than capable of filling their Timbs. He starts out spitting over â€œNas Is Like” and then smoothly slips into rhyming over Jay’s â€œSo Ghetto” with nary a hicc-up. The stand-out track among these is â€œA Million More Questions” where, not surprisingly, he rocks the beat from Jay’s â€œA Million And One Questions.” What sets this track apart from so many other mixtape reduxes is the way he uses the content and flow from Jay’s original verse and adapts it to his own perspective. Listen to the two songs back to back â€“ I guarantee you’ll be impressed.

For the most part, the beats Royce picks are winners, as he culls tracks from the likes of DJ Premier, Alchemist, and Carlos ‘6 July’ Broady. He even rocks a Christina Aguilera beat on â€œGorilla Pimp” and makes it sound hella gangster. How many rappers could pull that one off?

The lyrics are what make this album, though, and they are consistently A-list material, elevating even weaker tracks to the stratosphere. On â€œWho Want It?” he boasts, â€œYou ain’t gotta write rhymes, you can have ’em all in your head / I’ll read ’em off the floor when you dead.” Later, on â€œStreet Hop,” he threatens, â€œI’ll beat yo’ ass, leave you with your mouthpiece wired / Losin pounds in the hospital, be quiet / Till you finally come up out that coma bony, lookin like somebody put you on the South Beach Diet.” In addition to tough talk and witty punchlines, he proclaims his greatness on a number of tracks like the Preemo joint â€œHit ‘Em” and drops knowledge on an introspective tip on â€œKeep On Pushin’.” He never lets up his lyrical assault throughout the whole album, and he refreshingly keeps the guests to a minimum, with appearances only from Black Milk, Guilty Simpson, Termanology, and Kid Vishis. After having his own presence diluted by his crewnates on his last few releases, this is a welcome change of pace that helps keep things moving nicely.

This is an outstanding album by any standards, and it’s even more impressive for being a mixtape. Considering that he has crafted such a stellar album while working with so much borrowed material, Royce has truly proven himself to be a lyrical monster and the true King of Detroit. This is easily his best work since “Death Is Certain,” and it will surely leave you wanting more from the Five-Nine Assassin.