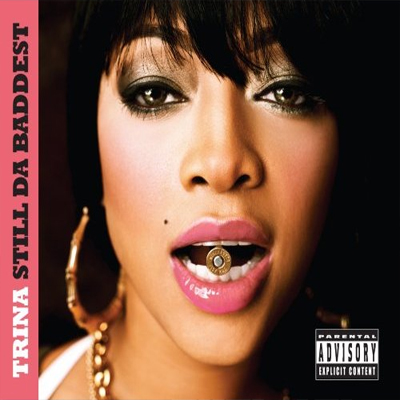 Little known to the masses Da Baddest Bitch” a couple of years later. In some ways being known as “da baddest” was to Trina’s detriment, because once she crashed into the mainstreams and flooded the airwaves with raunchy sexuality, many perceived her as a storm that would blow away never to be seen again. As it turns out Trina was both more intelligent and more persistent than her critics gave her credit for. Much like her New York contemporary Lil’ Kim, Trina used her sexuality to mesmerize the listener while still retaining control and power, deciding when and how much of her assets she wants to flaunt.

Unfortunately for Trina the waters receded and each of her subsequent solo albums has sold less copies even as she continued to improve as a lyricist and vocalist, with 2005’s “Glamorest Life” failing to even go gold. For both the artist and the label it’s obviously time to reclaim their status and show that Trina is “Still Da Baddest.” Here she is, ready to rock you like a hurricane, declaring that she’s “Single Again” and back on the prowl.

“Stop callin me apologizin, don’t even start it
Hope you find what you’re lookin fo’ back on the market
Let’s agree to disagree, don’t explain shit to me
I got my own money, there’s nobody I need, I need
I need my own space – I’m single again
Who’s who I’m minglin wit
Ballplayers sendin seats to the game
Ringside, still doin my thang
Changed my number, switched my cars up
Six months wit’cha, maxed ya cards up
It all started so promisin
Got my own diamonds, so I gave him back the promise ring”

The J-Roc beat for the track moves along quickly, firing off beats at a machine gun clip while still providing an underlying melody of ringing bells and electronic bass to groove to. Some would read Trina’s lines as being the self-justification of a golddigger, but if one pays close attention to the third verse Trina confirms her ex-beau had no love and treated her “just another object.” For this writer that brings back memories of the first video from “Da Baddest Bitch” where she repaid a cheating man (played by Warren Sapp) by smashing up his house and all of his valuable belongings. Trina’s maturity has made her constructive instead of destructive, laughing as she repays mistreatment by leaving behind a pile of debts and moving on to a better man. Of course it’s one thing to prove you’re the baddest when outsmarting a bad boyfriend, but there are still listeners out there who want to know she can get more raw than Khia, Foxy Brown and Lil’ Kim put together. Her duet with Killer Mike entitled “Look Back at Me” proves that point in spades:

“I got an ass so big like the sun
Hope you got a mile for a dick I wanna run
Slap it in my face shove it down my throat
Nigga where your blunt, I can make this pussy smoke
I know how to fuck, I know how to ride
I can spin around and keep the dick still inside
Now your mouth wide, you lookin real scared
I’m a maneater, headhunter I’m prepared
Yeah you runnin now, you runnin
I’ma put this pussy on you!”

This song is produced by Jay Roc, who if the liner notes are to be believed is ENTIRELY different from the J-Roc who did the previous song. The sound is certainly not the same as this song is stripped down to just a drum track, with the voices of the respective rappers getting Screw treatment at the end of their punchlines. Mike is not the only guest on “Still Da Baddest,” as Trina brings a few of her favorite Southern rappers in to tag team with her on the album. Rick Ross rocks with her on the smooth Gorilla Tek groove of “Hot Commodity,” Pitbull helps her prove she can “Stop Traffic” and Plies drops in for the bonus track “I Got a Problem.” That’s not to say she doesn’t branch out beyond her Southern brethern though – Missy Elliott can be found on Jay Roc’s “I Got a Bottle” and Oakland’s own Keyshia Cole sings on the seductive “I Got a Thang For You,” a Kane Da Kameleon produced track sure to be Trina’s next crossover single.

It may seem at some point that Trina is sharing too much of her big return with guest stars, since she’s only solo on 6 out of 15 tracks. The title track erases any doubt though with lines like “Said she couldn’t rap, but I’m still here standing/the baddest bitch is what they yellin/she’s not real, that one’s fake/I step in the booth kill the track one take!” Trina has not traded in her name to make this album chart any more than she’s given up control of how much sexuality she chooses to flaunt. In fairness though there are times when it’s hard to tell the difference between empowerment and degradation. On songs like “Killing You Hoes” she sounds more misogynistic than Too $hort when talking about rival females. It’s particularly inconsistent when compared to songs like her quiet storm groove “Wish I Never Met You” where she states that she is a queen and not to be mistreated, the kind of respect I’m sure the “Hoes” she’s killing would like to get too. Much like Lil’ Kim though Trina wouldn’t be nearly so fascinating if she wasn’t so contradictory. It seems that Trina has more depth of ability and personality than she’s willing to show but “Still Da Baddest” proves there’s still room for Trina on top – both sexually and on the Billboard charts – at least for a little while.