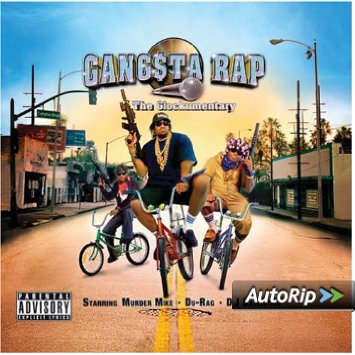 The wonders of the digital world allow me to present you this intriguing soundtrack. Had I seen this on a shelf in some store I probably wouldn’t have been motivated to drop my money on it, but seeing this on the “virtual” shelf of my preferred online music retailer I figured I could waste a few of my monthly credits to see what these guys are all about. As it turns out, Murda Mike, Du-Rag, and DJ Ballistics did surpass my expectations but not in the manner you would think. I thought this was the soundtrack to another hood documentary, instead this is the soundtrack to the first hood mockumentary. The most amazing thing about this soundtrack is that even though the music is meant to mock gangsta rap, it could be taken as straight up gangsta rap. Of course, the music is much more entertaining when you know it’s a joke, but either way Murda Mike, Du-Rag, and DJ Ballistics are talented rappers/comedians/actors.

The album kicks things off with “Gangsta Rap” where the hook lets you know what this soundtrack is all about:

Things get even funnier when the opening verse drops:

{Du-Rag}
“I was born on the set
When my mama water broke she was smoking the wet
So she gave me a dragv Then she named the nigga Du-Rag
‘Fore I could walk I was playing with pistols
Now instead of straps Du-Rag bust mentals
Fuck Batman, fuck a bat signal
When the homies need me, theys whistle”

Du-Rag and Murder Mike bring the laughter as they take gangsta rap to the extreme and DJ Ballistics gives us his best west-coast inspired beats. Trust me when I say this is the funniest rap I’ve heard, especially since I usually hate comedy rap. The problem is that sometimes it’s hard to tell whether the music is a joke or not. This isn’t Murder Mike, Du-Rag, or Ballistic’s fault, it’s just that I’ve heard tracks presented as true gangsta rap that are just as outrageous. You might say the bigger problem is that I’ve loved and bumped plenty of those tracks over the years. Take the hyphy inspired “House Shoes:”

“In my house shoes, playboy all corduroy
Cause I never have to run from the roller boys
Bailing through the hood with the AK
Police know cause they heard me on K-Day
Not a Muslim so I don’t wear boots
Got five colors to match all my khaki suits
See these other fools, they in karate suits
Looking like a hoe, I shoot em in the toe
Punk ass nigga better act like he know
Catch Murder Mike in house shoes at the liquor store”

I could actually see this track getting radio play, mostly because I saw this happen over ten years ago as Pimpsta’s “Dickies and Houseshoes” became a hit in Texas and beyond. To be fair, this is not an issue on every track as “My Mama’s A Bitch” wouldn’t be taken seriously by anyone:

My mama’s a bitch, cause she locked me out the house
“Why she lock you out the house?”
Cause I socked her in the mouth
“Why you sock her in the mouth?”
Cause she stole my dope
“Is she smoking?”
She sold it right here on the porch
“Murder Mike, Don’t your mama sell rocks for you?”
Nah, I just got her selling a little weed
“Did she call the police?”
She know I’ll kill her, plus my mama is my number one weed dealer

Fuck my mama too, “What she do?”
The bitch drank the last of my brew, and she asked for it too
“Did you tell her no?”
Nah, I told the bitch take her shit to the store
“Man, chill home boy she probably thought you were lying
Nah, cause when I told her I showed her my nine
“Shit, ain’t your mama been shot before?”
Yeah, my daddy shot her when she smoked his Newports

The laughs keep rolling on “My Beeper” when the crew makes an anthem that’s ten years too late. “The Hardest Nigga In The World” is also good for a few laughs as Du-Rag takes bragging to the limit, threatening to “choke you out with a sling shot” and “put you in a figure four head lock.”

If “Gangsta Rap” the movie is anything like this soundtrack, then it’s a very funny mockumentary. As funny as some of the songs on here are, the borderline tracks don’t offer much. The talent possessed by Murder Mike, Du-Rag, and DJ Ballistics is both the strength and weakness of this soundtrack. The guys can rap and produce as well as most west coast rappers, so when their songs lack focus they sound like any other generic gangsta rap song you’ve ever heard. These generic tracks also highlight the problems of gangsta rap. The main issue is defining when gangsta rap becomes too extreme. When the crew talks about being gangsta since birth, I can’t help but remember acts like the Geto Boys and Ganksta Nip who said similar things close to 20 years ago. I still consider hardcore gangsta rap my favorite type of rap music, but listening to this soundtrack I have to admit some of that music could sound ridiculous to the average listener. Basically, when this rapper/producer trio stays focused on a message or hook they are comedy gold, but when they lose focus the generic music isn’t funny but it might get you thinking. Thankfully, Murder Mike, Du-Rag, and DJ Ballistics stay focused for the bulk of this soundtrack so you should get a kick out of most of the music on here â€“ which is more entertaining than most “real” gangsta rap albums are nowadays.