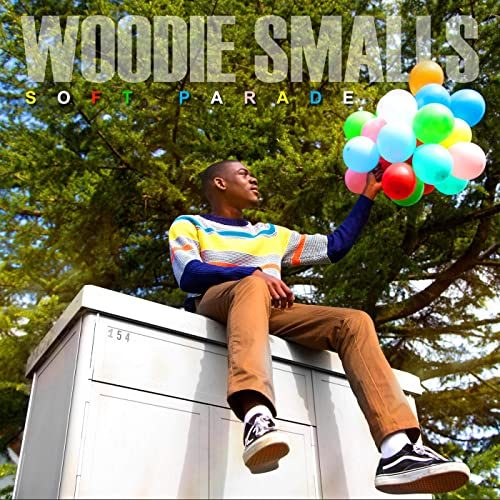 “Is you ready for the soup of the day? Cause me and rap go together like fries and a steak.”

If I told you Sylvestre Salumu was Belgian after listening to this clip, would you believe me? He’s not rapping in Dutch, French or German. He’s rapping in English and so far as I can tell without any trace of a European accent. Now obviously if you grew up listening to and imitating American rappers, you’d probably end up rapping like one too, but Salumu b/k/a Woodie Smalls takes that to an extreme I had not previously imagined. The appeal of rappers from outside the United States (for me at least) is that they don’t sound exactly like the ones I already know. Obviously hip-hop is a uniquely American export, but artists in other countries usually take it, mold it and shape it until it fits the local culture, language, and accent. Woodie Smalls does the exact opposite — he molds himself until he fits in as an American.

“About the Dutch” is the first real hint on “Soft Parade” that he’s not from the world leader in COVID-19. That’s not due to the accent or the flow at all. Instead it’s Woodie slyly referencing his heritage while urging whoever is holding the weed while he’s rapping to “pass the Dutch” but not on the left hand side. Otherwise even his friends who appear in videos like “Champion Sound” seem just as American as Woodie does when he’s spitting bars. “Writing 16’s like it’s a motherfuckin habit/I’m a genie with the words/And I’m steady smokin herbs/And I’m sorry little man, you gotta take what you deserve.” If I didn’t know better I’d think his entire bio was an elaborate prank on the listeners. If you told me he was from VA or D.C. I’d believe it.

None of this is meant to dissuade you from listening to Woodie Smalls or “Soft Parade” in any way. The truth is that he’s pretty good. Whether you know he’s from Brussels or Boston turns out to be irrelevant to the kind of music he’s making. If he’s decided to sound as American as he possibly could, it’s clear that his influences were rappers like Lupe Fiasco and Wale as opposed to AutoTuned crooners, even though he does sing the hook on “Purple Urkle.” He also modulated his voice up in a way that’s eerily reminiscent of Madlib’s alter ego Quasimoto, and I approve of both.

Unfortunately since I don’t have liner notes for “Soft Parade” I can’t break down who did the production on what track, but they too came up with a remarkably North American sound for the smaller Smalls. The light electronic synth and clap of “Night Slugs” featuring Gray manages to be a finger snapping head nodder without relying on big bass hits. “Work It Thru” is uncannily like a beat the late James Yancey would have laced. If someone told you Kanye West did “Money Folder” you’d probably believe it. It wouldn’t be one of his best beats ever, but it’s a very passable imitation.

So what do I make of Woodie Smalls at the end of the day? Honestly I’m a bit vexed I had a bio on him at all, because it took some of my focus off the beats and the rhymes and put it on where he was from. Compared to a lot of his peers on either side of the Atlantic he’s got a lot going for him — a well polished flow, solid breath control, good production and a whimsical sense of humor that suits his lighthearted topic matter. He swears a bit more than you might expect, not that I have a problem with it, but given there’s no parental advisory sticker it’s still mildly surprising. Perhaps we’ve all moved past the need for them at this point. Woodie Smalls has definitely moved past you needing to know he’s from Belgium. Just listen and enjoy.