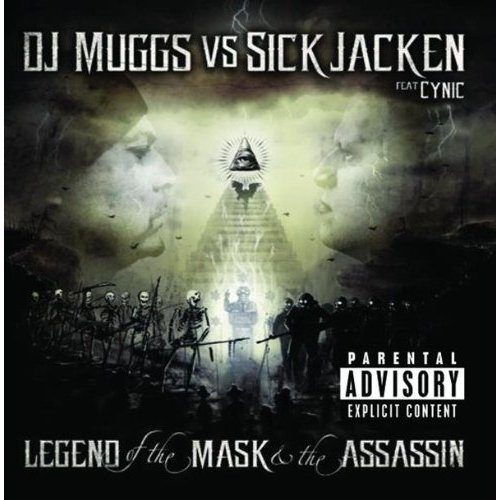 DJ Muggs vs. Sick Jacken :: Legend of the Mask & the Assassin

Lawrence Muggerud has been influencing the dirty, rugged and funky side of hip-hop production for twenty years. Jack Gonzalez has been rapping about the gritty urban reality of being poor and hispanic in Los Angeles for at least ten. While you might not recognize either of their names individually, you know the groups they are from quite well – Cypress Hill and Psycho Realm respectively. To make a long opening paragraph short “Legend of the Mask & the Assassin” is a joint effort created by Sick Jacken and DJ Muggs. This follows in the long-standing hip-hop tradition of taking two great tastes and making them taste greater together: Kool Keith and Dan the Automator, Danger Mouse and Jay-Z, and so on. In fact this is not even the first time DJ Muggs has been down this road – he already produced the cult-favorite underground album “Grandmasters” with hip-hop icon GZA flowing to his Soul Assassin beats.

While the rappers may be different on “Grandmasters” and “Legend of the Mask & the Assassin,” the similarities between the album are more significant. GZA/Genius may be the most quoted member of the Wu-Tang Clan, and is often rated as their best lyricist, yet he has not achieved the star power of fellow Wu soloists like Ghostface and Method Man. Sick Jacken was up-and-coming when Psycho Realm released their first major label album with B-Real in 1997; he became even more their star when B-Real could no longer join them on albums and Jacken’s brother Big Duke was shot and paralyzed. Jacken and GZA have both had the frustrating experience of being contractually trapped in bad record deals, and have both felt the sting of being acclaimed for their lyrical creativity and flow without being able to tap that acclaim for massive record sales. While collaborating with DJ Muggs doesn’t solve any of these problems per se, it does have the effect of stamping the “seal of approval” on their careers given Muggs has produced some of the biggest hits and best-selling rap albums of all time.

The impressions that can be derived from randomly surfing the tracklisting of “Legend of the Mask & the Assassin” are deceiving, particularly if the first two tracks you hit are “El Barrio” and “Ciclon.” One might surmise that Jacken and Muggs set out to record the most greatest spanish rap album of all time from these songs alone. “El Barrio” has that horny horn, swinging mariachi style hip-hop sound Muggs used so effectively on many Cypress Hill albums, with percussion reminiscent of Eric Bobo. “Ciclon” definitely sounds like a storm blowing through when it opens, with ominous warnings and blaring sirens, but it’s the staccato and dusty bassline rolling behind Jacken’s verses that set him up to rain down thunder. The truth is that most of this album is rapped in english and these tracks are the exception, although Jacken’s vocal tones will never be mistaken for a gringo. On “The Initiation” it’s clear that his imagery and gift of gab are up to par:

“The darkness ending, the light beginning
A rough stone given symbolized the flaws of many
My degree of knowledge started with the self rebelling
The self-healing from the demons that my mind’s revealing
They ask – do I believe in a supreme being?”

You can definitely believe in the funk that Jacken and Muggs bring on “Legend of the Mask & the Assassin.” Even though the name of the artist might lead one to believe they are opposed, it’s only working in concert they can create the enticing sonic landscapes found within. “Land of Shadows” is eerie and heavy, with a backdrop like church pipes and lyrics from Jacken about how Duke came back from death and said he never saw “the light.” A title like “Reptilian Renaissance” may sound like a science-fiction set-up but it’s actually an intriguing view of 9/11 as government conspiracy, with Jacken claiming Los Angeles is next on the hitlist. You don’t have to agree with his views but you do have to admit he articulates them well and the heavy beats bang it out. Jacken builds with “Unorthodox Blocks,” mixing politics and spirituality with hard-hitting street reality. Over a 16 song span you’ll find yourself climbing “Stairs to the Beast” and heading inexorably towards “2012,” the year of cataclysmic change prophesized by some interpretations of the Mayan calendar.

Sick Jacken is not what you would call a lighthearted dude, and some might even find him more obsessed with conspiracy than Immortal Technique, but in fairness no one ever accused Technique of not making his points with lyrics as intricate as they were passionate in their arguments. Even through the darkness Jacken’s voice still shines, and if the revolucion started tomorrow this might be the rallying cry on the front lines. “Legend of the Mask & the Assassin” may not be every hip-hop head’s cup of tea, but fans of either Muggs’ funk or Jacken’s lyrical flow will quickly find themselves converts to the other’s style within minutes of listening to this CD.