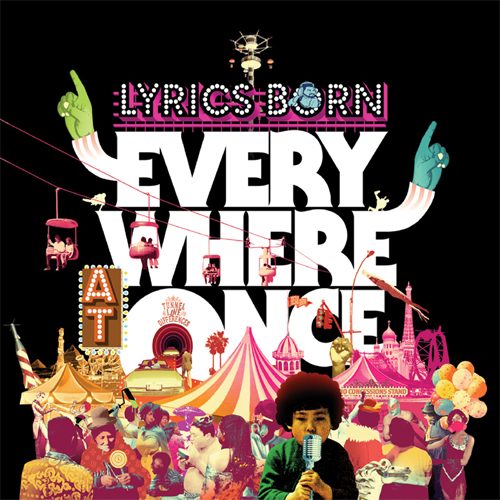 Lyrics Born :: Everywhere at Once

Tom Shimura, aka Lyrics Born, makes the kind of hip hop that even people who don’t like hip hop like. His music is fun, rooted in 70s and 80s funk, and free of the thuggery and misogyny that is so prevalent in the genre. He is a very “musical” rapper, incorporating singing with his raps, and making tracks that sound like songs rather than just dudes talking over a beat. He also embodies the positive, multi-ethnic, fun-loving spirit of his hometown of Berkeley, California, equal parts hippie and urban.

The cover of “Everywhere at Once” is a Technicolor explosion that looks like a hip hop version of the Beatles’ “Yellow Submarine.” The Taj Mahal, Eiffel Tower, circus tents, ominous, Blue-Meany-esque pointing hands, and a Cadillac all make appearances. The message is clear: the Bay Area MC is on some other level shit, and he’s gonna have fun with it. The album starts off with the call to arms “Don’t Change,” which sees Lyrics Born rapping:

“I heard them say I wouldn’t amount to much
I heard them say I couldn’t cut it and my album sucked
‘Cause I was too experimental, played around too much
Just because I wasn’t doing all the average stuff
But now all the people that used to think I was bound to bust
When they see me on the street they give me pounds and hugs
‘Cause I stuck to my guns
I’m about the funk
I can’t help myself
That’s the sound I love”

It immediately goes into the first single from the album, the bouncing, funky “Hott 2 Deff.” “Hott 2 Deff” has an irresistible beat, and Chali 2Na’s baritone works perfectly in tandem with Shimura’s own gruff flow. The album slows down a little for “Differences,” a mellow treatise to monogamy, with a hook of “we got differences, but I still love you.” “Cakewalk” sounds like a throwback from the 80s, a song that would be playing during a montage of a bunch of scrappy kids in breakdancing gear fixing up the local youth center. The slight cheesiness of the beat is redeemed by Shimura’s thoughtful rhymes:

“A Japanese rapper? That’ll be the day
That’s what my teacher told me back in the 12th grade
Do you believe that shit?
Good thing I didn’t
Otherwise who else gonna sell these tickets
Otherwise who else is gonna melt this image
That we can’t sell millions and our skill has limits”

When Lyrics Born is on, he is hard to beat. He takes elements of hip hop, pop, and R&B, and creates something that is just GOOD. It’s funky, it’s human, it’s fun, it’s thoughtful, it’s upbeat, and it makes you feel glad to be alive. He comes off like an affable, genuinely likeable guy who you’d want to get a beer with. Even his sex track, the Cameo-esque “I’m A Phreak,” is about monogamy. No strippers and groupies for Lyrics Born. It is also grounded in his solid abilities on the mic, which are complimented by a decent singing voice.

Unfortunately, to contradict hip hop’s most overworked phrase, “Everywhere at Once” is not all good. Lyrics Born evidently really did want to be everywhere at once, and when he gets experimental, he doesn’t always kill it. The dancehall “The World Is Calling” and “Top Shelf (Anything U Want)” don’t work, and the former’s “I deserve to be famous” message grates. “Do U Buy It?” is an unsuccessful attempt at electro-punk that sounds like Devo meets the B-52s, and should have been saved for a rarities comp. He’s more successful with downtempo numbers “Is It the Skin I’m In” and “Whispers.” They slow down the flow of the album, but their subject matter (racism, a eulogy to a deceased friend) make them moving pieces that provide a nice contrast to the frenetic energy of the rest of the disc..

The album closes with two versions of “I Can’t Decide (Everywhere at Once),” which chronicles Lyrics Born’s dilemma in deciding what venue of entertainment he wants to conquer next. With it’s Southern-fried beat, it sounds a lot like Outkast. That’s fitting, because like Big Boi and Andre 3000, Lyrics Born is on a mission to expand the boundaries of the genre. He doesn’t always succeed, and the result is an album that is a little inconsistent, but it is damn good more often than not. “Everywhere at Once” is as Technicolor as its album artwork, and as tasty and spicy as the vegan soul food they sell at the Berkeley’s farmers market.