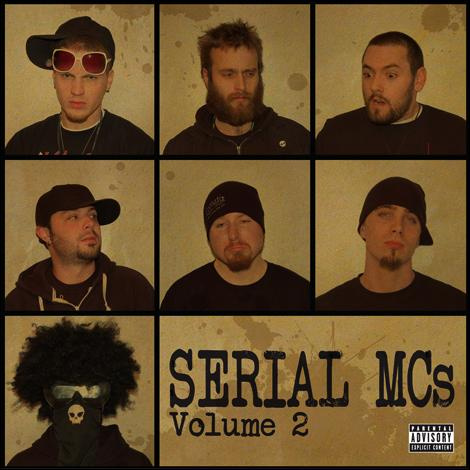 Minnesota has gotten a surprisingly high amount of attention for its rap scene over the course of the past years, because of the popularity of Rhymesayers based rappers Slug (of Atmosphere) and Brother Ali (who was actually born in Madison, WI), respectively. Both artists are known for their brand of poetic cynicism that makes the music they make so unique. Now we have the Serial MC’s, a seven member collective from St. Paul who aim to keep the local scene high on the fan’s radars with “Volume 2.” While they share some very vague resemblance to those that laid the successful path of Minnesota-based rap, they ultimately offer a darker and abrasive undercurrent.

The new album “Volume 2” is structured in such a way that each of the seven members of the group get their chance to showcase their individual skills. The album allows most to have a solo outing or two, whereas there are also the tracks in which they trade off verses as the Playaz Lounge Crew (a small collection of the larger group), or the entire Serial MC’s. Since race is still an issue for some close-minded rap listeners, it should be noted that all of the Serials MC’s are Caucasian (which is clear by the intonation in their voices and flow). Unfortunately, none of the artists truly distinguish themselves, because they all rap with a similar aggressive demeanor over harshly rock-driven productions–think something close to the sound of Kottonmouth Kingz, with many of the same subject matters and a dim sense of humor.

Perhaps Loonatix productions has the most hope MC Rentz, who offers the first solo joint on the album with “Beer For Breakfast.” Rentz is expected to release a new solo full-length LP entitled “1981.” As for the track in question, it is a erratically up-tempo cut that is driven by the type of screeching noises you expect to hear in the most anxious moments in a horror film and a very fast and loud drum pattern. You know almost exactly what you are getting yourself into from some of the opening lines on the album, like, “Crack can never brew in my flapjacks/ Bitch, I thought you already knew it was like that!” Rentz does a good job of changing up his flow from the bridges to the verses, but it still feels forced as he is essentially screaming a lot of the bars. He does do a bit better on his second effort, “Nobody’s Perfect (Accept Me),” which is obviously a self-appreciating track that offers a stronger sense of melody and bubbly beat. Still, knowing that this is considered the elite of the crew immediately raises an eyebrow of concern.

The notion of creating an image in the rap world is very important. Although this can be a very damaging aspect of the game, as too many gangster rappers overextend themselves by buying large diamond encrusted jewelry. This clearly is not the image that the Serial MC’s aim for, as most members wear a simple black T, or hoodie. Nonetheless, it becomes hard to believe songs like Professor Fresh’s “I Would Just Like to Sayâ€¦Shut the Fuck Up,” that is an unapologetically hardcore track that features ominous strings. There are a few reasons it does not play out in a favorable manner, but mostly because the liner notes have pictures of each individual member and most will find it hard to swallow that a guy like Fresh, who looks like the average shaggy-haired and goofy pothead, to be so confrontational. This seems especially true, given that he plays the acoustic guitar on a later track (“Forget It”), characterizing him as more of the type that used to try to serenade girls in high school hallways.

Of course, the Playaz Lounge Crew has an answer to these criticisms on their anthem, “Turn It Up.” Ironically this particular number is one of the high points of the album, due to a rapid-fire and razor sharp flow by the second emcee. Also, this is one of the rare instances that the music is produced by someone outside of the main stable of Serial MC’s–a more synth driven affair, thanks to Caesar and KG of OOB Music. The direction of the track is held true and there are some interesting and direct lyrics like:

“You got the wrong number, we ain’t really listening
All this pessimism got me balling up my fist again
All this criticism got me wishing I could visit them
They could fucking tell me what it is and what it isn’t then
And they could tell me to my face that I’m fake
And they could try to fix every mistake that I make
No matter what we do, a lot of give and no take
I might bend a little, people, motherfucker won’t break!”

This, coupled with an effective chorus makes the fuck-the-haters “Turn It Up” particularly effective as compared to the standard fare on the album.

More could be said about those that make up the entire group: MC Rentz, Mereness, Ill P.O.E., Just Smoke, Professor Fresh, Dirty D and Phatty McGee, but there is not much else really, as most all of tracks are variations of the same thing. The basic narrative of the songs is either how hardcore the respective members are, or odes to drugs or alcohol; all done with a provoking undertone.

While a few artists like Slug and Brother Ali have done their part in building up the unlikely rap breeding ground of Minnesota, the Serial MC’s do a lot to tear that down with their sadistic standpoint. I try to remain completely unbiased and subjective when reviewing such albums, but “Volume 2” can only be recommended if you are a fan of the likes of ICP or Kottonmouth Kingz. In that case, you may find something to like about these seven emcee’s, but the general rap listening public will likely be turned off by the abrasive nature of the music they create.