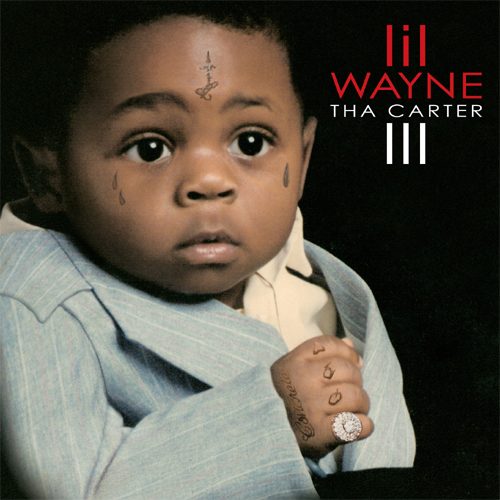 Finally. The most anticipated album of the year is here, and, sweet relief, we can all stop anticipating it. We have the “classic” baby-featuring album cover, the ridiculous levels of hype, the Number One single, the endless delays… You have to admit that “Tha Carter III” has the perfect set up. This review also has the perfect writer, since I am neither here nor there about Lil Wayne. The American media (with the exception of a minority of publications, including RapReviews) seems to be completely in awe of every aspect about him, yet in the UK he is virtually a non-entity – “Lollipop,” his first actual hit, charted modestly, and is currently floating around the “that is quite a nice song” category. In fact, the retail CD here comes with an almost apologetic sticker, stating that Lil Wayne is “hip hop’s cult hero” and a simple “Dude is the hottest rapper” endorsement from Kanye West. If you require a more comparative viewpoint, Lupe Fiasco is probably about ten times more relevant an artist on these shores. Before we start in earnest, a quick look back at the scores that he has received on this website – 6.0, 6.0, 7.5, 7.5 – and it is clear that he has gradually improved in stages. But hype is a motherfucker, and reducing it to the simplest terms possible: in the eyes of a whole lot of folks, this one had better be a classic.

The album kicks off with “3 Peat,” the requisite introductory stream of consciousness, and leads into the “Mr. Carter” featuring Jay-Z. We find Wayne complaining that the seasons hate on him, whilst Jigga delivers a solid, if unspectacular, guest verse – it certainly isn’t the lyrically slugfest that everyone hoped for, and the two Carters don’t compliment each other particularly well, but the song is strong enough nonetheless. A good start soon turns nasty, as the certified street banger, Bangladesh-produced “A Milli,” finds Wayne doing what he does best – weird flows, free expression, making nonsense sound logical, all over the most simplistic beat possible. The opening two tracks may seem a touch underwhelming, but fear not – they improve upon repeated listens. The first let-down of the LP is undoubtedly the second commercial single, “Got Money.” It is the ultimate play-it-safe track – give T-Pain a call, get an average beat, a monotonous chorus and quote lots of recently popular songs. It would probably work relatively well in a club situation (albeit in a bang-you-over-the-head kind of way) but remains a lackluster follow-up to “Lollipop.” The necessary one-for-the-ladeez track, “Comfortable,” will probably divide opinion – the Kanye-helmed beat is lush, but Weezy seems a touch ill suited to the music and feel of the song (in retrospect, 50 Cent nailed it with it “21 Questions”).

The next concept is nigh-on perfect – “Dr. Carter,” a track that is sure to enter the hip hop hall of fame. Even if Swizz Beatz did cut and paste David Axelrod’s jazzy “The Smile,” it was a good spot, as Wayne attempts to resuscitate three dying patients, infusing them with various facets no great rapper should be without (lines like “I’m a Doctor, so they don’t understand my writing” help, too). The initial WTF element of “Phone Home” soon gives way to the realisation that the Cool & Dre track is a banger, and Weezy collaborates with Robin Thicke once more on the beautiful political lament “Tie My Hands.” This is followed by “Mrs. Officer” with Bobby (Valentino), a reinvented “Fuck the Police” anthem of an entirely different, and deeply melodic, persuasion. The next Kanye collabo is “Let the Beat Build” – another song that is likely to be classified “love/hate.” The beat is catchy but clunky, the concept clever but limited – really, it is Lil Wayne that dominates the track, as he effectively toys with it, using his voice as an auxiliary instrument.

The awesome “Shoot Me Down,” an emo-style number, is one of the most tense and atmospheric moments in recent hip hop – an ode to Eminem, if you will, as the bleached-bomber is really the only other rapper that could ride the plucked guitar instrumental as well. Next, the huge (American) hit single, “Lollipop,” complete with at least seven different melodies, but for some ridiculous reason lacking the awesome guitar featured in the video version. The piss-poor David Banner-helmed “La La” belongs on a bad Busta Rhymes album, even if the chorus is pretty hot. And the presence of a Streetrunner beat is usually a good enough reason for suicide, but give credit where it is due, “Playing With Fire” is a monumental anthem. Even if the final verse is recycled, it is jaw dropping in execution.

Speaking of recycling, the incredible Alchemist-laced banger “You Ain’t Got Nuthin” features a used Fabolous verse, but personally I couldn’t care less as, flanked by an excellent Juelz Santana, the Fab one damn near steals the album with lines such as “Fuck having your ride pimped…/Have you in the trunk curled up like fried-shrimp.” If anything, Lil Wayne provides a hot chorus but gets shown up on his own album. The final track, a nine minute drug-fuelled rant at society and Al Sharpton (entitled “DontGetIt”), is scored by a wonderful Nina Simone-sampling beat, which makes it actually worth listening to more than once. And that’s it – 78 minutes of Lil Wayne.

The first couple of times you listen to “Tha Carter III,” I guarantee that you will be somewhat disappointed – simply because it has been over hyped, and the music may feel like a letdown. But persevere – the beats are better than you initially think, a slow burn that will gradually indent itself in your brain. Not every beat is a classic, but songs such as “Shoot Me Down” and “Playing With Fire,” or “Phone Home” and “Mr. Carter,” have catchiness and quality in abundance. More importantly, Lil Wayne has grown into an impressive MC – there are plenty of WTF moments where he makes little/no sense, but soon manages to turn it around into an amazing verse, time after time (â€œIâ€™m the definition of definitionâ€ springs to mind). He has finally found his voice, now a fully-fledged instrument, and there are plenty of hidden lyrical and conceptual gems all over the place. His subject matter has improved, and it is interesting to note that Weezy is at a comparable age to Jay-Z when S.Carter dropped “Reasonable Doubt” – meaning that this album really isn’t the be all and end all for Weezy’s career, it is more of a launch pad for Lil Wayne “the Artist.”

A couple of days ago, I was chilling at the house of my friend (a real and true hip hop head), and we were listening to “Tha Carter III” when I made an idle comment: do you think that Lil Wayne and Lupe Fiasco are this generation’s Jay-Z and Nas? I’ve never seen such a reaction from him before, and he launched into a passionate (one-sided) debate – mainly to prove to me that I had gone temporarily insane. A year ago, I told him, I would never have “blasphemed” in such a way – but times have changed, and so has hip hop. This is pretty much as good as it gets, for now at least. Lupe has the best flow in the game (anyone who listened to “The Cool” has to at least admit that), and Lil Wayne has found his voice as an inspirational major league (American) artist. Yet even after saying all those complimentary things, I still feel that this album ultimately misses out on classic status due to the music – the beats are strong, but something is lacking. Weezy himself holds down his side of the bargain remarkably well – as a self-confessed skeptic, I no longer need convincing that he is an amazing and somewhat unique MC. He brings a sense of drama, tension, a touch of humour, and he covers a range of subjects. The wonderful thing about “Tha Carter III” is that it is guaranteed to divide opinion – he will bring out as many haters as worshippers, and you yourself may love the tracks that disappointed me. This album probably wonâ€™t become his major international breakthrough (if we are talking diamond certifications and all that), and should help to moderate the Messianic status being heaped upon him, but it provides a solid stepping stone for future greatness. The album is listenable, exciting and succeeds in reigniting interest in hip hop and rappers that dedicate their life to become great MC’s, not just hustlers. Classic or not, that is something we can all be thankful for.