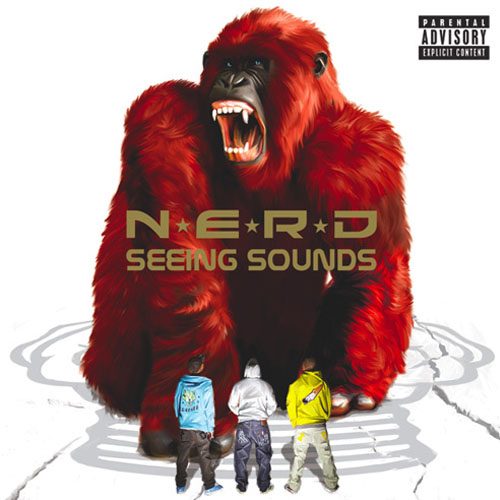 I was in Amsterdam at the end of April, visiting my best friend from high school. At one point in the blurry couple of days I spent there, a couple of girls came over to his flat – he had randomly met one of them a month earlier, and she brought a friend (OK, I know this sounds like a porno plot, but it was a social visit, honest). So, first things first: what music should he play? Without blinking, he instinctively reached for his well-worn copy of “Fly or Die.” I wondered why, since I remembered it to be incredibly average and barely had a second single. It turned out perfectly for the situation – a lazy drunken afternoon, making new friends – and the album was exactly the inoffensive background music we needed.

That is what N*E*R*D albums have become – situationally-dependent. Their first outing (“In Search Of…” – which feels an eternity ago now) was perfect for spinning in your dorms on the first day of college; the aforementioned sophomore LP is great for inoffensive social background music, saying “I’m edgy, but to up to a point” (think any European car advert of the last decade). Now in “Seeing Sounds” we have an album that is alright for the gym… Not bad to play video games to… Erm, not sure quite what else. Oh, go-karting. Except they wouldn’t let you take an iPod around the track.

The issue I will raise much more succinctly now is this: what the fuck is the point of this album? By that, I mean why are two of the most talented producers (definitely) and song-writers (er, maybe) of the last 20 years putting out ridiculously lazy and non-committal albums? It lies in such stark contrast to their glittering, albeit admittedly up-and-down, Neptunes career. “Seeing Sounds” ends up the audio equivalent of Pharrell fucking an unconscious model whilst he tries to complete “Grand Theft Auto IV.”

Don’t get me wrong, this album will please certain people, and there are some quality tracks on this album – the stupid fun on “Everybody Nose,” the stupid fun of “Anti Matter” and the wonderfully OTT “Sooner or Later” (which should have closed the album). You see, the first 5 songs set the album up to be a pure party album – which actually would have worked a lot better, with the last track being a comedown moment. But then, delusions of adequacy spring up and the LP ends up shooting off in different tangents, where musically it is solid (if entirely unchallenging), but lyrically/conceptually it do nothing for you. The second half of the album barely has any strong choruses, and sure, as far as percussion goes, it has a nice beat – but since when did that become good enough for Pharrell and Chad?

On the train today, a girl sat opposite me. She was a typical “Chelsea” party girl – fashionable, beautiful, rich. She was nodding her head to her iPod, so I wrote a text message on my phone – “Sorry to disturb, but what are you listening to?” – and gave her the phone. She smiled, and wrote back “new n.e.r.d album xxx.” She skipped off merrily at the next station, as only Chelsea girls do, and summed up one of the key demographics perfectly – fun loving party animals. Yet, would “Seeing Sounds” even satisfy them? N*E*R*D don’t fully commit to making a party record, and there is no discernible concept, or even link to the excellent title of the LP. The condition they refer to is “synesthesia.” I actually have musical synesthesia – where you can literally see sounds. Fortunately mine isn’t the severe kind that can prove a hindrance – if anything, my ability to “see” music has paved the way for career in this business. As for N*E*R*D, if this is the music they “see” perhaps they should get laser-eye surgery.