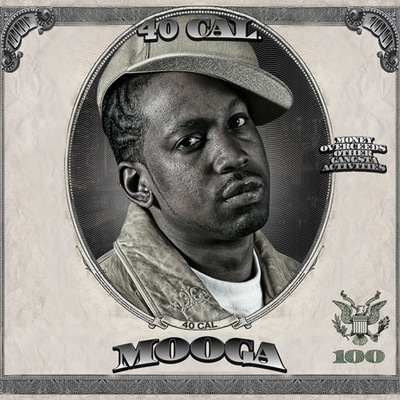 The cover of “Mooga” features a black and white photo of 40 in a mock dollar bill, eschewing the flashy artwork and red, white and blue color scheme that is standard for Dipset releases. Combined with the public spat between Jim Jones and Cam’ron, you begin to wonder if the mighty Dipset empire is crumbling. 40 tackles those concerns right off the bat in the intro, addressing his crew over heavy metal guitars: “Dear Dipset, the G’s not eatin’/Somebody tell Cam and Jim to please stop beefing.”

If the album cover had me wondering if the Diplomats were dissolving and 40 Cal was branching off on his own, the music immediately makes it clear that “Mooga” stays tried and true to the Dipset formula. And it is a formula: whining synths, bombastic production, and beats that are as shiny as wax fruit and about as nutritious. There were no production credits on the review copy, so I’m not sure who produced what, but evidently he reached out to a lot of unknown producers on Myspace. To their credit, none of the beats sound amateurish, and several, like “On My Shit,” “Harlem Shuffle,” and “Ten Stacks,” are pretty banging.

The beats are solid for what they are, but there is nothing on here that was truly exceptional, especially when paired with the uninspiring rhymes. There are the odes to money (the album’s title, “Movie Shoot”), half-hearted criminal boasting (“Shooters On Deck”), the Latin track (“Cuarenta”), and the club banger (“Ten Stacks,” which also doubles as yet another ode to money). Cam, Juelz, and Jim Jones are absent, but JR Writer, Duke Da God, Sudaboss, and S.A.S. all show up to contribute verses. There is even a snippet of dialogue from “Scarface.” Clearly, 40 has been studying his Gangsta Rap 101. On “Bars of Death,” he lifts liberally from Biggie’s “Suicidal Thoughts”:

If imitation is the sincerest form of flattery, Biggie must be flattered as hell in whatever end of the netherworld he ended up in.

“Bars of Death” is one of a few songs on the album where 40 allows his true skills as a lyricist shine, rather than merely treading well-worn and tired clichÃ©s. “Grown Man Bills” is another standout track which sees 40 describing the mortgages, child support, and other grown up bills he pays, as opposed to the jewelry and strippers that other rappers brag about. When he puts his mind to it, 40 can be the kind of dark antihero that the East Coast is famous for. Unfortunately, this mature side of 40 is quickly buried under a mountain of potty talk on the rest of the album. Maybe 40 is trying to make doo-doo rhymes his gimmick, but he needs to drop that quick. Threatening foes by saying “you’re in deep doo-doo,” or ad-libbing “I farted and shit came out. I shartedâ€“I sharted on you niggas!” is lame, pure and simple. “Googa Googa,” which references 40’s allegedly copious semen, is just gross. It’s unfortunate that 40 goes for the cheap jokes and easy targets, since he could clearly be dropping more insightful and complex rhymes. Instead, he sticks to the obvious.

40 Cal has the potential to be a very good rapper. He has a better handle on gritty street rap than most of his fellow Diplomats, he knows his way around a verse, and he is much more thoughtful than your average 19-year-old rapper new to the studio. He doesn’t realize his potential on “Mooga,” but I’m hoping that some day 40 will drop an album that will be truly worthy of his talents.