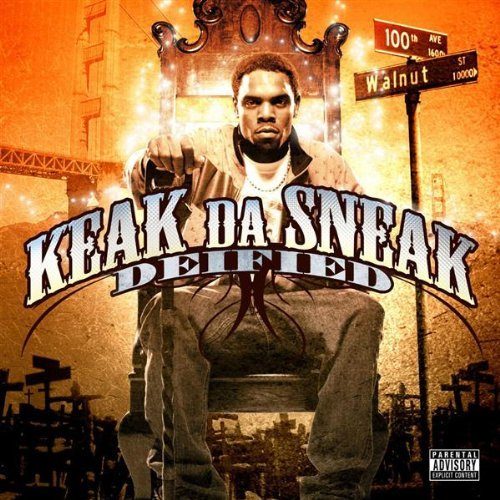 I spent a year working too many hours at a music store while in college, and one of the most entertaining parts of the job was buying back used CDs from people. We got all kinds of nuts, from the teenager with an impulse purchase of the latest boy band album to the hard core music lover looking to update their collection. Whatever the case, the people selling stuff back were always convinced their music on offer was gold, even as I delicately delivered the news that their Yanni greatest hits CD was not deemed marketable material by our corporate bosses. One of the most exuberant of such sellers was a white teenager in baggy pants and backwards hat who was trying to sell a bunch of underground rap CDs that didn’t exist in our system. After talking up each CD as I turned it down, he saw that the only discs left in the pile were by Bay Area stalwart Keak Da Sneak and proceeded to sing the raspy-voiced veteran’s praises. (“Have you heard of him? He’s the greatest!”) I told him I was familiar with Keak but that, sadly, we couldn’t offer him more than a quarter for either album.

A couple of hit singles and an absurd number of albums later, Keak Da Sneak is a much more recognizable name with moderate rap fame but little sales clout to show for it. He’s put in work “in the Bay, reppin Oakland!” for about 15 years now, starting with his group 3XKrazy and followed by a slew of solo releases rolled out darn near monthly. With so much material out there, even dedicated fans may have a hard time sifting through the pile and deciding which albums are worth their time and money.

Although it does contain some material found elsewhere in his massive catalog, “Deified” is overall a winning effort by Keak Da Sneak. Produced almost entirely by Young Mozart â€“ who you may know from his work with Akon, Christina Milian, Too $hort, and Ne-Yo, just to name a few, or from his production on practically every reality show on TV â€“ “Deified” bumps pretty consistently from start to finish, occasionally dabbling in darker or mellower sounds but primarily anchoring itself in the super-duper hyphy Keak helped put on the map. The spaced out sound effects and chopped up siren of “Blurpt” are pure Yay Area goodness, as are the quasi-classical synthesized violins and handclaps of “Stock With Game.” Other songs succeed by fusing the best of the Bay and L.A., particularly the early ’90s variety, as on “19 Dummy” featuring Daz Dillinger, which bounces along like old an Dogg Pound record, and “N Fronta Ya Mama House,” whose whining synths are eerily reminiscent of Snoop’s “Murder Was the Case.”

While these songs feature more lush musical landscapes, some of the album’s best tracks are its most understated. The “That Go” remix featuring Prodigy and Alchemist is also produced by Young Mozart, but it sounds like pure Mobb Deep in the best of all possible ways. Its minor key melody and minimalist drum line create an ominous atmosphere for the three MCs to work with. The Alchemist is alternatingly witty and fatuous, but since his presence helped inspire this gem of a track, he gets a pass. The album’s other high point is “Oakland” featuring Mistah FAB, which finds Keak spitting an extended chorus of “Oakland, yeah that’s riiight” in homage to his hometown. The beat is almost entirely composed of cowbell hits that Bruce Dickinson would be proud of (“I’ve got a fever!”), with an occasional distorted electric guitar note thrown in for good measure, while Keak reminisces about the days “when the area code was 415.”

Lyrically, Keak is hard to pin down because he’s so damn inscrutable â€“ every few lines you might catch a word or two. His gritty and enigmatic delivery makes up for much of this, but he still sounds best in measured doses, which is why the extensive guest list on “Deified” is quite welcome. Too $hort and Celly Cell complete a winning trifecta on “Playa Like Me,” and Too $hort’s mellow flow is especially effective for its contrast with Keak’s over the top antics. “Nothing Without You” featuring Messy Marv and Matt Blaque is less successful, but it’s primarily because of the cheesy singing on the hook and the saccharine sound of the beat (rapping over tinkling bells is most definitely NOT Keak’s forte). Paul Wall shows up twice, and both efforts are winners, particularly “Hard Tops & Drops.” The percussive beat is pleasantly low-key, and Paul Wall sounds hilarious quoting “Silence of the Lambs” while flirting with the ladies (“hoppin out on them stunnas like ‘Hello, Clarice'”). The best collaboration, though, is easily “All I Know” with E-40 and Clyde Carson. The beat by Droop-E goes from synthesized hysteria during the verse to smoothed-out guitars on the chorus, and E-40 reminds listeners why he’s the Bay’s reigning king:

“Fam-bam, where they at tonight? I’m bout to come through
Y’all whiskeyed yet? Nah, but we fin’s to
What we smokin on? That there story-tell
That story-tell? Yeah nigga, purp-ale
I’m off a fifth of ‘gnac, always strapped, ridin with my stapler
Peel him back, split his pack, run into a hater
Break him off, I’m a boss, never been a faker
Charmin soft, different cloth, skin like alligator
Hustler by nature, me and my niggas get yaper
To us a Benz is a scraper, we 49ers and Raiders
All of my peoples is hustlers, now we don’t fuck with no busters
Just chemists, chefs, cookers, bakers, tycoons and pimps, players, ‘costers
I can catch a fish without a hook, light a fire without a match
Talk a broad up out her scratch, break her for her income tax
Ever since the boy was knee-high had the mouthpiece of a P-I
I be handlin my B-I, I got hustle in my Levi”

Despite a good number of guest appearances throughout, Keak does have to hold it down by himself occasionally, and over 23 tracks things wear a little thin. While Keak’s style is intriguingly different at the outset, it gets redundant fairly quickly when he’s not accompanied by more conventional (AKA intelligible) MCs on the mic. Furthermore, the straightforward hyphy beats start to get stale around the midpoint as well, resulting in mediocre tracks like “Go Dumb Go Stupid” and “Drop It On Tha 1.” The album is redeemed in the end by a couple of bangers fans will already be familiar with, in the form of a remix of “On Citas” featuring Paul Wall and Chingo Bling and 2006’s ubiquitous “Super Hyphy,” which still sounds good today.

With “Deified,” Keak has finally put together a solid album with high production value and plenty of new material to enjoy. At 23 tracks and almost 80 minutes, though, it’s just too long, and the hyphy formula that succeeds initially gets stretched almost to the breaking point by the album’s end. Despite this, there are a lot of impressive songs here, and long-time fans will be pleased with the quality of beats, guests, and lyrics on display. Although it could conceivably garner him the widespread recognition he has long deserved, I fear “Deified” will fail to make a significant dent outside of the loving local arena he has already captured. He’ll remain a cult hero among Bay Area supporters, but elsewhere he is still likely to be overlooked, confined to the bargain used bins of the corporate world. No matter, if you’re down with the hyphy movement or just want to hear a veteran working at a craft he has practically perfected, “Deified” is a smart buy this summer.