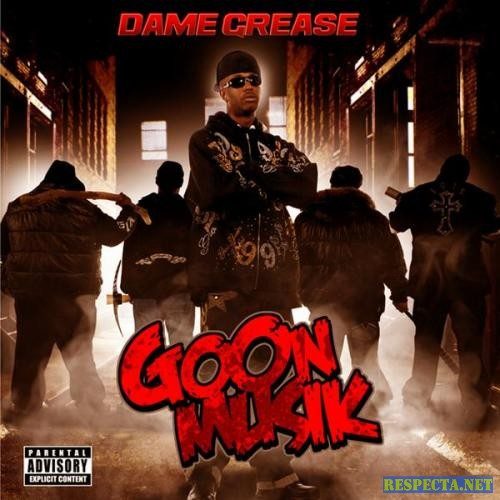 “Goon Musik” is something of a phenomenon. It’s the rare hip-hop album that doesn’t have one original idea throughout the whole disc (with the possible exception of worshipping Godzilla). Such truly uninspiring albums only come across once every blue moon, and are usually accompanied by the spontaneous combustion of some anonymous critic. While hip-hop’s underground is overpopulated with bad rappers recycling themes, “Goon Musik’s” repetitive gangster themes are comical.

But what’s even more impressive is that Dame Grease and his Goon Squad still managed to make a decent album. For all the shortcomings of the rappers present here, Dame Grease repeatedly proves himself to be a solid producer. For those who don’t know, Grease has produced for rappers like Jay-Z, Nas, DMX, and T.I., and is a fairly established name in the industry. “Goon Musik” puts his talents on full display, and the album thumps from front to back, in many cases, making up for the sub-par lyrics.

But much like the themes of this album are caught up in meaningless gangsterisms and thug affirmations, the beats are uniformly stuck as a support for that mentality. So even though the beats do come tough, they can’t save the album from becoming redundant after the first three or four songs. Because of that “Goon Musik” succeeds better on a song-by-song basis – it becomes tired and boring as a straight through listen.

On that song-by-song basis, there are a few highlights: the album opens with “Lotzilla,” where Dame Grease’s pounding bassline meshes perfectly with the slowed down raps (delivered in half-bars) to create a threatening atmosphere. It also establishes a pattern of hard-edge beats that is rarely deviated from throughout the album. Make no mistake, if you enjoy bass-pounding beats with hard-edged raps to go with them, this album does have quite a bit to recommend it.

But the album is so repetitive that it’s hard not to get tired of it all. Even the tribute to dead rappers in “9’s Out” sounds tired, and the lone departure from their thug themes, “Goon Luv,” is just horrible, with even Dame Grease coming weak on the beat. Overall, “Goon Musik” is proof that good hip hop is a lot more than some goons over hot beats.