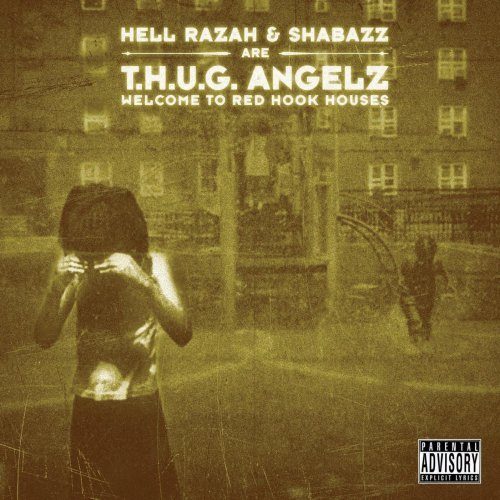 Every city has neighborhoods where the average citizen is too afraid to go to during the day, much less at night, places untouched by gentrification and unblessed by prosperity, places where the homicide rate, unemployment rate, and poverty rate are all in the double digits. The rest of the city steers clear, and the disenfranchisement, desperation, and inequality that is allowed to persist in these bad sections of town are only discussed when crime in the hood spills over to more expensive addresses. Think Chicago’s Cabrini Greens, Los Angeles’ Compton and Watts, San Francisco’s Hunter’s Point and Tenderloin, and Brooklyn’s Red Hook Houses.

“Welcome To Red Hook Houses” is a tour guide of the notorious housing development, with Hell Razah and Shabazz the Disciple as tour guides under the name T.H.U.G. Angelz. Razah and Shabazz were members of Wu affiliates Sunz of Man, and the grimy NY frame of mind of the Wu is all over this album. The opening skit has the duo attempting to get a cabbie to take them to Red Hook from the airport, only to be initially rejected because it’s too dangerous. It takes 40 dollars and some serious cajoling for the cabbie to consent to drive into the neighborhood, something that must be a common experience for the people who live there. On the next track, “Welcome to the Red Hook Houses,” Shabazz quickly lays out with Red Hook is all about:

“It’s Red Hook, you know the name rings bells
GG last stop, nigga welcome to hell
It’s like a maximum facility
Your block is your cell
And yo we see mad niggas get popped but never tell
It’s like mandatory life without no parole”

For the rest of the track, he and Hell Razah lay out a convincing argument that Red Hook is equal parts prison and hell. The tone of the track, along with the whole album, is gritty and dark, presenting the sad state of affairs with a documentary realness. They seem saddened by the crime and drama, but also a little proud of where they’re from.

“The Obituary (E.B.G.C.)” is a powerful tribute to slain comrades that is powerful that puts some people behind the statistics:

“It was Tuesday, August 21st, 1990
The day my life changed
Can never put this moment behind me
Ten in the morning he was making a sale
Paradise weed he lost his life fresh out of jail
In 86 he bagged his first brick he looked up to climb
When he caught that gun charge we quoted lessons during phone time
My whole life flashed through your mind before yours was ended
This one morning, why you ain’t practiced Second Amendment”

As with most of the album, Shabazz has the better verse, coming off like a slightly less off the rails Ghostface. He even nails Ghost’s signature storytelling on “The Visit.” Hell Razah goes for a more measured, elder statesman vibe, kind of like GZA. Sometimes it works, but he is plagued by some questionable rhymes, like on “The Obituary”:

The whole verse just doesn’t quite work, and sounds clumsy, like he was going through a rhyming dictionary trying to figure out what could rhyme with “teary.” Speaking of clumsy, “Gang Love” is a well-intentioned call to arms that loses something in the execution. For the most part, however, Hell Razah and Shabazz strike the perfect balance of talking about life on the street without unduly glamorizing it. There are a lot of rappers who make life in the projects seem like one big party full of cars, women, and cash, and I appreciated T.H.U.G. Angelz ability to talk about crime without making it seem like a Hollywood action flick. Their grimy realism has a lot in common with fellow East Coasters like Mobb Deep, as well as the Wu Tang Clan. Unlike the Wu, who turned ghetto life into a kung fu mythology, T.H.U.G. Angelz keep it real, never diverting into horror fantasy or samurai references. At times I wish some of that old Wu craziness would appear, because “Red Hook Houses” could get too serious for its own good at points, and could have used a little humor to break the mood. Then again, maybe they didn’t want to compromise the gravity of the message by trying to lighten things up.

Somber and bleak beats match the mood of the album perfectly, and while RZA doesn’t make any appearances, his influence is all over the production. There are a lot of sparse beats with piano loops and old soul samples, and producers Jordan River, Vanderslice, Bronze Nazareth, Bond, Shawneci, Blue Sky Black Death, Smoke Shop, Shroom, and Spell all offer up decent stabs at the boards. Highlights included the smokey jazz of Smoke Shops “Apt. 7G,” the sampled strings on Shroom’s “The Visit,” and the soul sample on “The Obituary,” by Bronze Nazareth.

Red Hook is now ground zero for gentrification; young artists moved into the neighborhood, making it seem safe for the young professionals and Ikea who are now moving in and outpricing the current inhabitants. “Welcome To Red Hook Houses” is a compelling slice of life of a neighborhood many wouldn’t want to be stuck in at night. It may end up being a historical document of the people who lived there before being pushed out by waves of people able to pay high rents, and eager for the edginess without the actual edge.