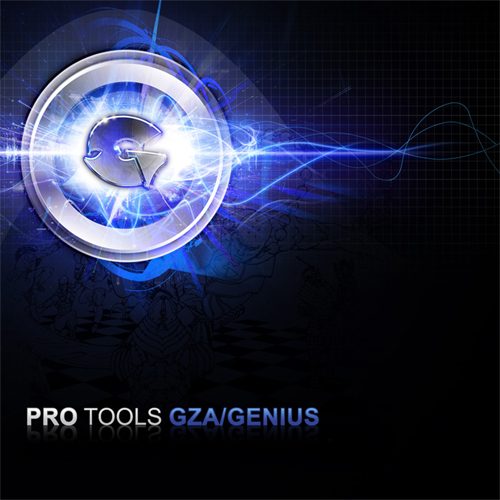 By now the legend of Gary Grice goes without saying. What the hell, let’s say it anyway. This 20+ year veteran of the rap game once had a career relegated to dusty discount bins and hip-hop obscurity after an ill-advised attempt by his then label Cold Chillin’ records to market him as a Big Daddy Kane type rapper on a pop tip, which was a big-time flop since nobody needed a second Kane or another pop crossover MC. Had he not linked up with his cousin Robert Diggs to form the Wu-Tang Clan, this would have been the last any of us ever heard of him, but once Rob changed his name to RZA and Gary changed his name to GZA a sonic earthquake caused all of the hip-hop landscape to shake. Nothing’s been the same since, and over the last two decades GZA has cultivated a well-deserved reputation as one of hip-hop’s most intellectual rap artists. GZA albums don’t come along too often but are almost always highly touted when they do finally arrive.

2008 marks the arrival of another such album, “Pro Tools,” the first of all-new material since he collaborated with DJ Muggs on “Grandmasters” in 2005. GZA and his new partner Babygrande Records wisely chose to start leaking songs off the album to build up a buzz among the hip-hop community, and among the hottest of them was the True Master produced “Alphabets.” The song is a Wu-Tang throwback for all the right reasons, and at only 2:42 long lives up to the GZA lyrical tradition of keeping it “half short and twice strong.”

“All I need is a beat, with a continuous loop
And a live vibe, that’ll hypnotize like the flute
Along with something that’s rugged by nature like the forest
Composed like the symphony without a chorus
A place with the path and trail that you follow
With the wood, where you drive your nails, but too hollow
Far from reality, with a slim chance of getting back
Even if you narrowly escape the hidden traps
Nothing but the driven raps written in my notebook
Inspired by the cap and the gown, that’s on the coat hook
Prepare for the chemical rush, something new to cause
Your heart to bass, but it’s tangable to touch
Associate with those who are consumed with beats
Produce fire, until they melt the room with heat
You know my ink lay all over the sheets, let us gather around
and form words, everytime they meet”

Typically with a GZA album there’s a lot for hip-hop heads to like and little to complain about, and “Pro Tools” is no exception. At this point in his career GZA is firmly established in his rap craft as a vocal narrator, lyrical illustrator and artistic verbal creator. The bad news is that he’s not going to get any better than he already is, but that’s good news considering he’s pretty damn great at it and has been for the longest time. One of GZA’s trademarks is the ability to weave a metaphor into an entire song from start to finish, filling lines with double entendre meaning throughout, and the Jose Reynoso produced “0% Finance” is no exception:

“Took her off the showroom floor, no money down
Near the Chrysler building in the heart of Midtown
200 horsepower under the hood
Junk in the trunk, very far from damaged goods
Designer frames with windshields that stay tinted
The most beautiful thing someone invented
Her wrangler had a sticker on the bumper
A sign in case tow trucks tried to jump her
Rear view mirror that of Serena William
Staring was a crime then the look, kill ’em
Brushless showers and the Brazilian wax
Cash in the glove compartment free from tax
Low mileage, on the odometer
Graduate with more degrees than a thermometer
Spark plugs for great conversation
She would focus on the finish line and destination”

It’s not a coincidence that Reynoso’s beat has a Knight Rider-esque pulse to it, which keeps RZA’s metaphor racing along at breakneck speed. Other standout tracks (and there are many) include the Jay Waxx Garfield jazz laced “Path of Destruction,” the RZA and Irfane Khan-Acito collabo’ with GZA on “Life Is a Movie,” the drug-laced “Colombian Ties” with beat by Bronze Nazareth and guest appearance by True Master, and yet another stripped down Wu style throwback track thanks to RZA on “Paper Plate.” The transcriber of these lyrics for OHHLA interprets GZA as taking thinly veiled potshots at G-Unit, and I’d have to agree:

“I get it, you got rich robbing those in the industry
Bite off this one, steal from your enemy
Never try to play the hottest one out ya camp
He might step off and take half the joules from ya amp
Enough to make ya Vogue on that cover of GQ
Only missing the sheer blouse, homey, you see-through
Stop sipping on that formula +50+
They want heat? I give it to ’em, burnt and crispy
Rhymes too short to box with God, so stretch it
Especially these over-rated raps, step to fetch it
I told you if I rain, there’ll be an eternal drizzle
Woodwork strips being chipped from sharp chizzles
One verse shatter your spine and crush your spirit
No matter what, you still ‘Window Shop’ for lyrics
If you was a ‘Pimp’, put tricks on the stroll
And if those were ‘Soldiers’, give ’em bigger guns to hold
Who shot ya? You don’t have enough on your roster
You move like a fed, but you talk like a mobster
That ‘Yayo’ you slinging, please abort it
Too many cuts on it, cokeheads they won’t snort it
I spray the +Flea Unit+ with pesticides, and you can get
Your best ghostwriters, get ’em all to testify”

GZA has little to fear from the Unit lyrically, and the same can be said for at least 85% of the rap industry as a whole. “Pro Tools” could be called a return to form, but since GZA never lost the form in the first place, it would be more apt to say that he’s kept the peak form he already had and just honed his lyrical tongue to an even sharper and more polished edge.