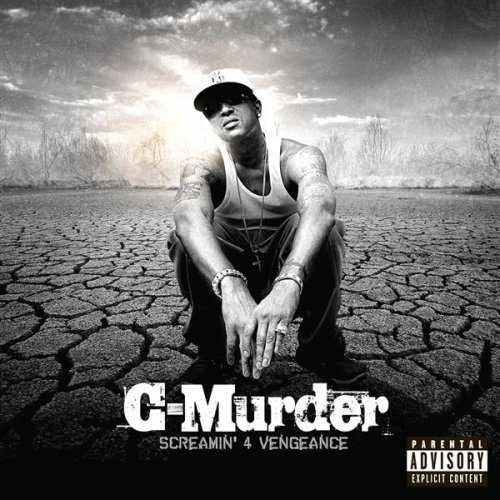 This may be the last time we hear from Corey Miller. I’m not attempting to be overly dramatic about the situation, but the former No Limit Soldier is already awaiting a second trial on murder charges later this year, the first conviction having already been overturned by the Louisiana Supreme Court. Miller’s releases have been sporadic as it is over the last seven years, as he just barely managed to get out “The TRUest Shit I Ever Said,” actually recording his vocals behind bars and possibly putting his legal fight to get released in jeapordy in the process. 2006’s “The Tru Story… Continued” presented scant new material, largely comprised of remixes and a bonus DVD that writer Matt Tomer noted was of questionable (yet otherwise entertaining) quality. Miller’s currently on house arrest with limited privileges until October of this year when the re-trial begins, and as such Miller was able to record “Screamin’ 4 Vengeance” under the watchful eye of the courts.

It’s clear that Miller was able to set up a decent to above average recording studio in his home, given that he’s not allowed to leave the premises of his home for any reason other than a medical emergency. It’s also clear that Miller’s relationship with his brothers Silkk the Shocker and Master P is at best strained. Only Silkk gets a shoutout in the liner notes and neither he or P. Miller appear anywhere on this new album’s 14 tracks. In fact if anything it’s EX-members of the once large Tank conglomerate that dominate this album’s guest appearances. Mia X can be heard on both “Mihita” and the “Posted On Tha Block” remix, C-Loc teams up with Slim Thug (hey homey your new album “Boss of All Bosses” is LONG overdue) on “Down South” and Max Minelli is on “Freeze (Ice Man).” In some ways this seems tragic since blood should always take precedence over music, and it’s the TRU family bond that helped take No Limit Records straight to the top in the 1990’s. These days though P alternates between staying one step ahead of bankruptcy and promoting his son’s career as an actor, baller and rapper though so it may not be a diss that he doesn’t show up on the album. Then again he may be avoiding jeapordizing said son’s career by being perceived as getting caught up in Corey’s murder trial. Someone’s going to have to clear the air sooner or later, but given C-Murder barely acknowledges his family on “Screamin’ 4 Vengeance” you don’t have to be a detective to read between the lines.

Putting all of that aside the music and lyrics of “Screamin’ 4 Vengeance” are almost exactly what you’d expect from C-Murder. If you’re not familiar with this long time rap veteran, those words mean exactly nothing to you, so allow me to explain. Out of all the rappers past and present who can claim No Limit Records heritage, C-Murder was always the most understated member of the clique. He has a deep bass voice with a menacing resonant edge, which always suggested that even when speaking quietly he would be heard loudly. Murder’s raps have always had an aura of cool as a result. Brother Silkk became well known for his hyperactive barely on-beat raps, Brother P was the cartoon character of the crew whose larger than life personality attracted fans, whereas Murder was the underground sound of his family and his recording label. “Be Fresh” featuring Detroit on the hook may be as close as this thug can get to jiggy, as he spits to a echoing bass driven II Deep Music beat about his shopping habits, although his house arrest has to make this song largely reminiscent about good ol’ days:

“Just left the block, but you know that a block boy really can’t stop
All the money that I got, I’ma put it on the side, but you know I’m gon’ shine
I’ma hit the mall with a big knot hoppin a big drop top
Big knots in the pockets like four socks pull it out mo’ jocks
Mouth drops gotta watch for the South cops
I’m clean, yeah you know me, veteran in the hood stand up O.G.
Low key oh did I say low key, mo’ ki’s than the boss on O.C.
Mo’ cheese than the weed in the indies, so I shop in Belize, overseas
My wrist ain’t froze they freeze
So cold they might bring Berry to her knees”

Murder has never really been a punchline rapper or known for his wit and double entendre, he just spits “TRU shit” acting as a narrator for his life and CP3 turf, letting us presume his words are true at face value. More often than not they carry the air of truth even if exaggerated thanks to the dominant vocal tone Murder has, which is what helps carry an album Murder had to feel pressured to finish quickly before another long jail bid. Songs like “Gangstafied Lyrics” work as a result, as Murder paints himself as the most hated on in rap for being TOO real, and the simple but hard hitting 2Saint beat allows that personality to shine. The songs on “Screamin’ 4 Vengeance” are definitely above average for gangster rap, and even unknown upcoming talents like H Double on “Streets Keep Callin'” sound like potential future stars on II Deep beats. Unfortunately above average production and a magnetic personality can only do much, as the topic matter is still predictable and at times highly repetitive, while Murder’s voice at times borders on being monotonous. It’s nothing you haven’t heard on any previous C-Murder album, and nothing you wouldn’t hear on any future one either if he beats the rap at his second trial.

One of the benefits of the TRU family was that the Miller boys always complimented each other, playing off their respective strengths while covering up their weaknesses. On his own C-Murder is a star just off his vocal tone and the right beat to flow over, but you can also understand why so many people have compared him to Tupac Shakur over the years. Clearly he’d like to be remembered as the greatest “reality rapper” of all time, incarcerated or otherwise, but Shakur always balanced his reality with a deeply abiding sense of personal loss, tragedy, humility, and the ability to spark things with his wit. It’s perplexing that as Corey Miller faces the realest shit anyone has ever written about, lifetime behind bars with no chance of parole, we get so little of the personal tragedy from his own viewpoint and so much of the same old C-Murder. Perhaps he feels the need to keep up his image for his fans, but as a fan of C-Murder I’d have been more impressed if he cut through the facade for at least one or two songs. “Screamin’ 4 Vengeance” will satisfy long-time fans and gangster rap afficianadoes while leaving the the rest wondering if this is a truly fitting last chapter to close the Corey Miller book on. It’s definitely not the realest shit he ever wrote.