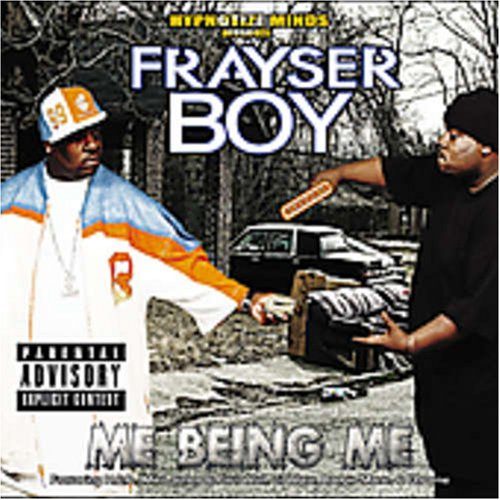 Frayser Boy :: Me Being Me

One of this summer’s indie favorites at the movie theatres was the gritty and true to life rap saga, “Hustle and Flow.” The movie focuses on a pimp turned rapper who struggles to get his demo heard by local legend and national superstar, Skinny Black. Skinny Black’s life story in the movie could be compared to many a local Memphis star, such as Playa Fly and Al Kapone, but his story is more likely to evoke memories of the Three Six Mafia and their own story of “hustle and flow.” Though the average movie-goer probably has no clue who the Three Six Mafia are, their transition from putting out local underground tapes to gold and platinum albums is a hip-hop fan’s dream come true. Almost coinciding with the nationwide release of the movie, Hypnotize Minds put out the sophomore album of another local Memphis star, Frayser Boy. His first album, “Gone Off That Bay,” was hailed by underground rap fans but failed to make much noise outside of Memphis and the south. With a lead single including 2005’s version of ebony and ivory (Mike Jones and Paul Wall) and usual solid production from “da superproducers” DJ Paul and Juicy J, Frayser Boy looks to do his best job of imitating his mentor’s ascension into stardom.

DJ Paul and Juicy J’s work behind the boards is largely overlooked by the hip-hop community, mostly because their hard core topic matter doesn’t lend itself to commercialization. But those who can look past the ignorance, or even look forward to it, get treated to consistently sinister and top notch production. “Me Being Me” is no exception as the self-proclaimed “superproducers” bring their usual mix of earth-rattling bass and surprisingly orchestral melodies. The syrup-influenced lead single, “I Got Dat Drank,” features slick synth production and a pounding bass line that is sure to please any fan of the purple drink. Other notable tracks include the fast-paced “Ain’t Nothin Changed,” where DJ Paul and Juicy J put together a unique mix of strings, and the somber “Seen Thangs.” The female vocals on “Seen Thangs” add some soul to the hook and Frayser Boy’s remorseful rhymes are complemented by a stirring combination of piano rolls and strings. The super producers do strike out at times, but the only outright horrible track is the generic “Fuckem’,” which suffers from boring drum patterns and horrible synth production, both in sound and arrangement.

Lyrically, Frayser Boy sticks to the Three Six Mafia’s usual ghetto tales. You won’t find the most complex metaphors, but Frayser Boy’s raw and uncut accounts of growing up in Memphis are enough to carry the album. Frayser Boy is at his best talking shit or reflecting on his tough upbringing. Those looking for crunk fight music need look no further than the rambunctious “Get Knocked The Fuck Out” or the rowdy “Posse Song (H.C.P.).” But Frayser Boy shines even more when he reflects on his life in the M-Town. On “Seen Thangs” he manages to paint a vivid picture of the struggles he’s faced:

“In the Bay I was just another young nigga
Didn’t know shit, hood fulla a fucking drug dealers
Saw a lot of thangs, some my niggas dead, some my niggas still living
Out here getting bread, trying to stay away from prison
I got my first gun when I turned sixteen
Plus on the grind, it wasn’t heard for me to get things
Cuz its a lot of shit nobody ever knew about
I let the past be the past, so I do without
And yeah I got robbed, and yeah I got shot
That’s why I keep the .45 next to me cocked
I’ll never slip again, I got artillery
A nigga here for good, no getting rid of me
So fuck my enemies, they’ll never know the half
You’ll find yourself dead nigga, all because my past
You couldn’t survive in the places, nigga, we be
I miss my homie, rest in peace my nigga Keke”

Of course with such a straight forward delivery and relatively simple lyrics Frayser Boy is bound to strike out at times. The attempted club-song, “She Got Me Saying Damn,” isn’t quite Frayser’s style and the guest rapping by Chrome is even more lackluster. Chrome does a better job on “Serious,” but still sounds like a less animated version of Baton Rouge’s Boosie. Lil’ Wyte shows up for a surprisingly strong showing on “Water.” Overall, Frayser Boy and the H.C.P. do a well enough job but fail to do anything that hasn’t been done before.

“Me Being Me” delivers what it promises as Frayser Boy presents his own story of coming up in the Bay (a neighborhood in Memphis). You won’t find much in the way of mental stimulation, but it will provide plenty of bump in the trunk. DJ Paul and Juicy J show once again why they continue to be relevant in the rap game over 10 years after they started dropping their underground tapes. Frayser Boy won’t win any lyrical awards, but his southern drawl and reality rap keeps things interesting. Some may have tired by now of the “hustle and flow” stories told by every rapper, but Frayser Boy and, more broadly, the Three Six Mafia keep showing that a good story never gets old.

Frayser Boy :: Me Being Me
7Overall Score
Music8
Lyrics6