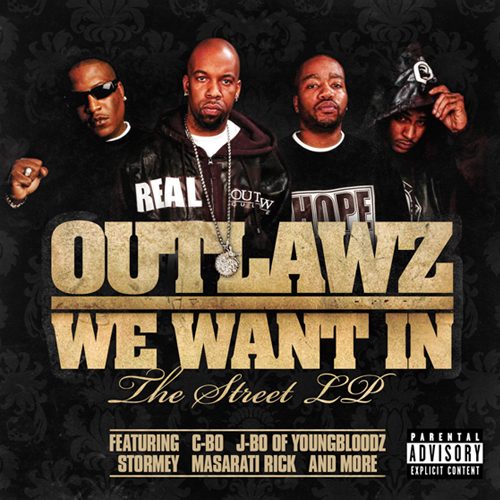 Outlawz :: We Want In

At first glance I figured “We Want In” was just another street rap album, and the first two tracks seemed to confirm my suspicions. The disc opens with the title track, in which the boys stake their claim on the record industry and various hip hop labels, and is followed by “Everything Happens.” Both tracks featured dramatic beats with synthesized strings, and workmanlike rhymes about being on your grind that are decent but nothing special, the MCs’ gruff swagger compensating for some pretty average verses. I figured I was in for ten more tracks of unimpressive gangsta rap, and resigned myself to slogging through it and doing the review.

However, things picked up on track three. The beat features a melodic, catchy hook, and the lyrics, while not straying from thug rap format, are definitely on point. Young Noble starts the track off:

“I tell the little homies
Get your paper on
Be about your grind
I’m like a runaway train
Ain’t no stopping mine
They say that money talks
Then I ain’t gotta speak
Even with my mouth closed, I gotta eat
You don’t want beef
You want to rap about it
Do your interviews
Acting like you got a problem
The rap game sucks
We came to change it up
Bringing that real shit back to the forefront”

I guess I shouldn’t have been surprised given that the Outlawz are 2Pac’s old group, made up of Kastro, Young Noble, E.D.I. Mean, and Stormey. They have been around for 13-odd years keeping true to 2Pac’s thug life mantra. No wonder they sound better than your average fresh-off-the-streets street rap crew; they ARE better. Their experience and skill show on tracks like “Love of Money,” produced by Cosmo, which takes what could be a typical tale of chasing that dollar and turns it into a story of how money can corrupt. “Thuggin Till I Die,” produced by Tha Nox, is another great track, offering an unexpectedly somber beat and rhymes that once again go beyond standard thugging. “My Life” has a sparse and sinister beat courtesy of E.D.I. Mean, and equally sparse and sinister rhymes, and “I’m Mister” works its sappy strings for all they are worth. On all of these songs, the Outlawz elevate street rap into something more than just dudes talking about how hard they are. These songs have interesting, banging beats, and the Outlawz’ rhymes interject maturity and experience into the standard issues of getting money and being real.

Unfortunately, while there are five great tracks on this album, the rest of it is pretty tepid and uninspiring both in terms of beats and rhymes. Too many songs are about making money or getting laid, and it seems beneath what these guys are capable of. The title track is the biggest misfire: it has a plodding hook, and the whole concept, that they are knocking at the doors of the record industry trying to be let in, is not something these veterans should be rapping about thirteen years in. Nothing else on “We Want In” is actively bad, but there are several tracks that aren’t actively good, and sound like countless other anthems to money and the streets. To their credit, the Outlawz don’t ride their 2Pac connection too hard, and seem content letting their own abilities and legacy speak for themselves. In the end, this is at least half a good album, and proof that the Outlawz still have some juice in them.