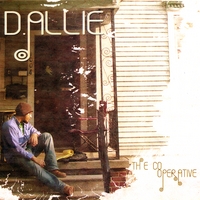 For D. Allie, it was apparent that music always existed within his soul. Growing up in Michigan, D. Allie wrote rhymes early on as a child and with musical influences from his musician father, he quickly excelled as an emcee. Eventually, he fully learned and expanded on his talents to take his art form to another level. Forming “The Cooperative Opposites” in 1998 with his childhood friend, they promptly exposed their rhyming skills in high school and soon released an EP in college which was readily accepted around Michigan. As they soon graduated from college and went their separate ways, D. Allie decided to devote himself to a solo project while proving he could succeed on his own. Fortunately, while landing a job at a recording studio and asking to be paid in recording time, D. Allie was able to complete his self-released solo debut, “The Cooperative.” As he remains genuine in his lyricism and message in “The Cooperative,” D. Allie shows another side to the underground hip hop emcee. “The Cooperative” shows a different life, a distinct meaning, and an emcee like no other.

As D. Allie takes his career one step further with his own solo project he still reverts back to the days where he first got started as the album name, “The Cooperative,” pays homage to his original group “The Cooperative Opposites.” In doing so, D. Allie kicks off the album with “Who’s That (It’s Co-Op)” as he reminds his audience that “this is a solo album, but Co-Op ain’t over..it’s still a movement.” With a light xylophone and snare, “Who’s That (It’s Co-Op)” brings us back to where it all got started as D. Allie shows how the music is still very much alive and his album is just a continuum of where it once left off. As The Cooperative Opposites remain a part of his life and music even as a solo artist, it is clear that D. Allie is dedicated to his art as an emcee and lives to tell about. His hard work and dedication thrives throughout his music as he tells how his fervor for music began in “Who Are You.” Harmonious violins blend with a simple bass to only enhance D.Allie’s storytelling of how he became enamored with lyricism and music while relaying the message to live out one’s dreams to other artists. In “Who Are You,” he begins his journey as a child as he shows:

“He was just a little kid finally learning to walk
Used to watch MTV listening to them talk
Patterns and rhythms, deep in his heart
He’d give anything to be them
In a b-boy pose you should have seen him…
His parents passed it off as a phase
Didn’t notice how the music affected him
Somehow expected him to grow out of it
But he was too far in
He didn’t study Shakespeare, he analyzed Rakim
Used to write down all of his verses and memorize them
Practicing in the mirror to the beat a capella
He prayed every night that he’d come up with something clever
Staring at the page so still at his fingers
Eventually they moved and with time they got better
The untrained eye would probably say it was nothing
But he knew it was a start of something”

The sanctification to his music thrives throughout “The Cooperative” as he constantly tries to show why he chose the path to become an emcee, the struggles that come with it, and how he is different from the rest. “The Saga Begins” incorporates the traditional sounds of piano, flute and cymbals while introducing the hip hop aspect to the track with a hard bass as D. Allie reveals his life as an emcee and where his inspiration comes from. With his own self released album, he expresses his individual, sole efforts in making his music as he says:

“I’m independent if you know what that means
It’s just me, myself, and I
I ain’t got no team
Ain’t no record company to advance that cream
So I’m living verse to verse just to live my dream”

In ” Change the Name,” D. Allie proves that his music does not follow the norm in hip hop tracks and shows that he brings his own individuality to the scene. This funk driven track produced from DL Jones features a mixture of horns and bass guitar while complementing D. Allie’s strong lyrical message. Also, in “Description of a Fool 2007” D. Allie deliberately mocks whack emcees who only exist for the mere fame and glory that hip hop industry falsifies. In a humorous, yet truthful track, “Description of a Fool 2007” features a fictitious “MC Big Time” who is infatuated with his material possessions such as his Rolex and bling. D. Allie ridicules the disingenuous nature of most mainstream emcees as they almost seem to set back the true emcees who are actually trying to come up in the hip hop scene. In yet another track to taunt fake emcees, D. Allie calls out to the failed attempts on hip hop in “Anonymous Posers” which features emcees Asylum 7 and 5ill. In this funk track with blaring horns, D. Allie shows that “when the smoke clears, only the real remain.”

On a more poignant note, D. Allie incorporates his father on three tracks of “The Cooperative.” As a guitarist, D. Allie’s father, Gary Strauss is first introduced in “Let it Knock/Pop’s Guitar pt.1.” As one of my more favorite tracks on “The Cooperative” with its striking beat, keys, and guitar, “Let it Knock” shows the simple truth of listening to good music in order to get away from your daily routine. D. Allie’s father comes back in two different interludes appropriately named “Pop’s Guitar pt.2” and “Pop’s Guitar pt.3” as he lays down his own guitar solos and exemplifies his own talents as an artist. Clearly, the positive influence of his father is present as it has shaped D. Allie immensely. Although D. Allie somewhat follows the trend of many underground emcees who discuss the struggle and difficulties as an emcee, D, Allie is able to bring something else to table with his unique talents. His effortless lyricism and strong delivery are unmatched as his rhymes are clear and concise. It is apparent that his skills as an emcee are above and beyond any amateur as his thought process in each track are clearly thought out and comprehensible. While the positive message to strive as an emcee thrives throughout “The Cooperative,” D. Allie is still able to bring out some humor and at the same time is able to embody the most poignant moments of his music. As he never forgets his roots and maintains his loyalty to his crew, D. Allie is a noticeably unfeigned emcee who only takes pride in his art form.