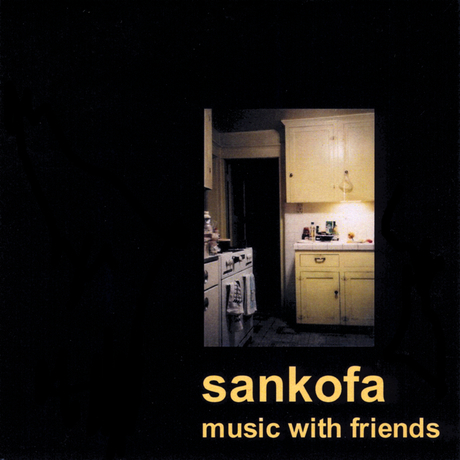 For the second installment of his free “Music With Friends” series, Fort Wayne, Indiana rapper Sankofa teamed up with Brenn Beck of the Left Lane Cruisers. The result is six tracks of blues-drenched hip hop that is weirder and more experimental than your average free mixtape.

I’m a fan of Sankofa’s work, and I’ve already given him a two glowing reviews, so in the interest of fairness, let’s start with the negatives: the tracks sound like they were recorded live, and the sound suffers as a result. The whole EP is grainy and muddy, and it is often hard to make out just what Sankofa is saying. Sankofa is in MF DOOM/Kool Keith non-sequitor mode, dropping random-ass line after random-ass line. He still sounds good, but those looking for social commentary might be disappointed. The choruses can sometimes be annoying, with Sankofa shouting “I’m a big plucked chicken!” or “Jump! Jump! Jump the shark!” Also, most of the tracks are built around a blues guitar riff, and as a result they sound like different versions of the same song rather than distinct tracks.

Those negative points aside, this EP still rocks. The live sound offers an energy and spontaneity that is often missing in hip hop. There is an organic, loose quality to the music that is not always present in hip hop, a genre where the producer and the studio often play as big a role as the rapper. The EP hits its climax on track 4, where Sankofa raps over a live drumbeat. The drums sound echoey, clangy, and awesome. It is a sparse, stripped-down sound that totally works, and is made even more off the wall and amazing by the chorus, in which Sankofa and Beck intone the Beach Boys’ “Cocomo.” With this song, Sankofa manages to veer hip hop in a more experimental direction while staying true to the spirit of the music. It’s still banging, it’s still funky, but it’s also wonderfully weird.

So despite the sound quality and the fact that many of the tracks sound similar, “MWF2” is still a good listen. The blues riffs make a perfect compliment to Sankofa’s rhymes, and the energy and excitement of the live performance is a welcome element to hip hop. This is a nice change of pace from the usual release, and really captures the sound of two guys jamming, experimenting, and having a good time. Once again, Sankofa proves himself to be an artist to reckon with. I can’t wait for the third installment.