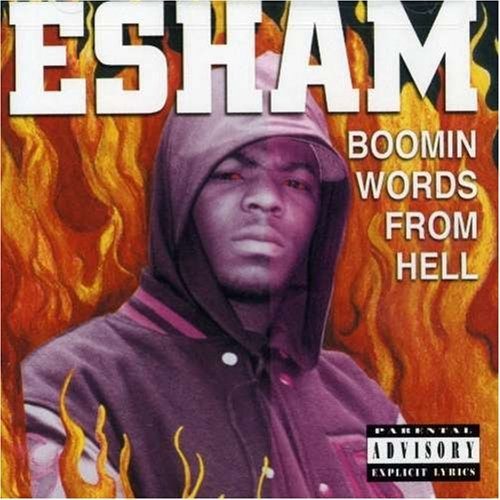 By now everyone in Hip-Hop knows Esham as the purveyor of the “wicked shit.” On August 26th he’ll be supplying his fans with even more of that wickedness with the release of Sacrificial Lambz, his 12th full length studio album. This week RapReviews caught up with the Detroit legend to find out more about the album, why he feels he should be mentioned alongside Jay-Z and Nas, how the beef with D-12 was squashed, and why Britney Spears is at the top of his list of artists he wants to work with.

Adam Bernard: Let’s start by talking about the album. The image on the back cover of Sacrificial Lambz, which is a lamb’s head with the skin peeled off, I’m guessing that’s not a statement about vegetarianism, right?
Esham: Nah, not at all. Actually it was just a statement about being a sacrificial lamb. Throughout my entire career I feel like I’ve sacrificed styles for the industry and we get to this point, which is Sacrificial Lambz, and it’s more of a gift from me to the consumer, from me to the industry, to show em basically what to do again. After I do something then it becomes accepted by the mainstream. The mainstream always looks to the underground for their ideas and for new ways of doing things and I feel like we’ve been the nucleus of the underground for so long that this is another gift to the industry. And there’s nothing more cute than a couple little lambs anyway… and them not knowing what’s about to come.

AB: This is your 12th studio album, so content-wise what’s different for you this time around?
E: Content is still the wicked shit, but we tackle some political and social views, as well. Songs like “Zeitgeist” which is actually a Russian word that means the spirit of the age, that’s what this is all about, we feel like we’re the spirit of the age, we’re that driving theme out there right now. Songs like “Garbage” are about the garbage that the industry is putting out. I want people to recognize your boy Esham is one of the greatest and I consider everything that they’re doing garbage. When it comes to lyrical content you got Jay-Z, you got Nas, people claim that they’re the greatest lyricists out there, but I feel like my lyrics are on the same level if not better than those guys’ lyrics. That’s where the whole “Garbage” theme comes from, my frustration with the industry putting out so much crap.

AB: So what is it about the Jay-Z’s and the Nas’ that makes them mainstream and how come you’re not right there with them?
E: Well, take someone like Nas, for instance, I’m not trying to discredit him or nothing, but I can basically put out what I want, that’s the beauty of being an independent and being your own boss. Nas couldn’t release the Nigger tape. He released it, but he gave it away for free. The record company that he was on, there was no way they were going to put that out. So right there, there’s a difference, nobody is actually censoring what I do.

AB: So why do you think he has the rep of being such a great artist if he’s being censored?
E: I just think that’s a part of the bureaucracy that is Hip-Hop. People claim they got their ear to the streets, they claim they’re so in touch with Hip-Hop, but they really aren’t because you see the same faces on magazines, you hear the same stories, they don’t want to necessarily get nothing new out there until you got somebody like Esham kicking down doors and basically putting it in your face.

“My fan base is more personal with the records, they feel like this is THEIR music.”

AB: What is it about your work that you feel connects with people?
E: People feel empowered by my work; they feel like when I make something I actually make it for them. My fan base is more personal with the records, they feel like this is THEIR music.

AB: A handful of years ago you got into it with D12. Have you squashed your differences? Are you all cool now?
E: Yeah, we’re all cool. Actually I think everybody from the city gets it now. Before Proof passed away I had went to his birthday party and we kicked it and basically we both were like, man, we were acting real childish. Proof actually said to me, “man, it’s kind of crazy how we lost so much time just bickering and fighting amongst each other when we could have worked together.” Unfortunately he passed away before we could actually do something, but we squashed all that, everything was pretty good. I haven’t spoke to Eminem at all, but I figure if Jay-Z and Nas can make up Eminem and Esham should be able to make up, but maybe he’s just on some whole other, you know what I mean?

AB: So you’re open to squashing your differences with him?
E: It’s all squashed. It’s not even no big deal. Actually I wish Eminem would come aboard and just help more out with the Detroit Hip-Hop scene which he claims he loves so much, but he doesn’t help anybody around here. But that’s why you got a guy like Esham, cuz I open doors, I don’t close doors. Everybody that’s in the city that’s into Hip-Hop, I feel like I’ve opened doors for them, I’ve never closed them, I’ve never locked them behind me, and even though they might not support me, they being the Hip-Hop community and all the backpackers and what not, I still support them and wish them well and much success.

AB: What are some of the more memorable moments for you of your career so far?
E: There are several and they’re constantly happening, but just being the first artist from Detroit to sell out the State Theater, the first independent artist to headline his own tour, stuff like that is memorable for me. Having the so-called greatest rapper in the world compare himself to me… I think that’s the shit.

AB: You mentioned before that the mainstream looks to the underground for ideas. That being said, how do you feel you’ve influenced the industry?
E: People used to sit on records for two or three years before putting them out, but when we came into the game we started putting out records every other month, which in turn put turbo into the industry and now people drop two and three records a year. Also, the whole game now has changed to wicked shit. Everybody wears shirts with skulls on them and to me that’s just a lower form of what we were doing back in the day until now.

AB: Having done so much, what else would you like to accomplish in your career?
E: I’m really shooting for a platinum record. Really, I’m trying to go diamond, that’s why I threw “Ringtone” on there. If I can go diamond I’ll be happy. Until then I’ma just keep grindin. I see everybody doing what I do so I know if this was football they’re reading out of my playbook, they’re running my O plays. I can’t stop because we do everything ourselves. We got no handouts from the industry. I don’t even have no industry friends, not even some famous person where I could be like “yeah, I’m cool with him.” These people are morbidly scared of me and for no other reason than I kick the wicked shit. They want to put me in a box and be like you’re anti-religion, or you’re a devil worshipper, and it has nothing to do with that. I listen to some of the music they play on the radio today and I’m thinking to myself, that’s not gospel, they’re talking about selling dope and killing each other. It’s a funny thing, they try to act like because they wear a cross on their neck that they’re holy and it’s just the opposite of that, they’re the most evilest people on the planet. It’s camouflage. They’re the wolf in sheep’s clothing.

AB: What are some of the wildest rumors you’ve heard about yourself?
E: I’ve heard I was insane. I heard I got Meagan Good pregnant. They said Wendy Williams was my momma. I’ve heard that I’ve died several times, too.

AB: Well, I think we say with some authority that you’re alive. Now I have one final question for you today. After 20+ years rapping, who would you like to work with that you haven’t worked with already?
E: I’m actually looking for Britney Spears, I want to see if I can hook up with her and do a track.

AB: Are you serious?
E:I like Britney Spears’ shit. I think she’s great. I was at the American Music Awards one time walking the red carpet and she was right behind me. I should have tackled her just her to say hi. But I like Britney Spears, I think she’s the shit. There’s a lot of people I want to do tracks with but she’s one that I’m really trying to get in touch with, so Britney, if you’re reading this, I’m on you baby!