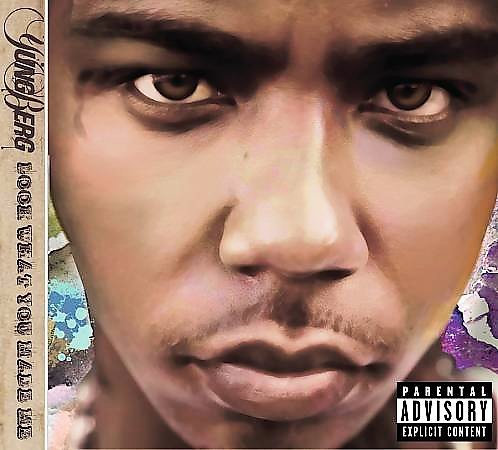 Yung Berg :: Look What You Made Me

Just over a year ago Yung Berg’s “Look What You Made Me” was the album people couldn’t wait for. In fact demand was so high that the labels behind him released the “Almost Famous” EP just to satiate the public demand. That demand came in large part due to a single called “Sexy Lady” which featured a snippet of a very familiar song – one which Kanye West himself looped for his hit “Diamonds From Sierra Leone.” To Rob Holladay’s credit the way he flipped the sample for Berg gave his song a completely different feel. While Kanye’s song seemed like a tribute to James Bond, Yung Berg’s groove had a funky Chi-Town horny horn sound with Berg’s friend Junior crooning the hook. Friend? Well that might be overstating it. I couldn’t help but notice that Junior’s name was not on the back cover of “Look What You Made Me” next to “Sexy Lady,” nor was he credited anywhere in the CD’s liner notes. Being observant is a dangerous thing at times, because it sidetracks you from getting a review done in a timely fashion, but I just had to know why Junior’s name was dropped even though you can still hear him singing on Berg’s new album. After 15 minutes of fruitless searching (Wikipedia was useless and Google wasn’t much better) I finally found this article from TSU’s student newspaper, so a big shout out to Tennessee State and Seth E. Davis for being the only ones who could solve this mystery. Student media had the chance to interview Berg after a spring concert on campus and this is what Berg told them when asked what was up with Junior:

“The nigga went on to work with a bunch of other motherfuckers, so I dropped him and now he has no record deal.”

Anyway the challenge for Berg is now two-fold – one to prove that he’s not a one-hit wonder, and the other to prove that he doesn’t need Junior to sing the hook to HAVEmore than one hit. Both questions seem to have been answered by “Sexy Can I” featuring Ray J, or perhaps it’s Ray J featuring Yung Berg given the song was ALREADY released on J’s latest album “All I Feel.” Including the song on both albums was a wise choice, given many hip-hop heads who wouldn’t buy an R&B album will cop this one, but then again it’s hard to say this chart topping single is a selling point for “Look What You Made Me” when it’s been available since April of this year. Okay scratch that – “Sexy Can I” won’t prove either point even though it’s a pretty fly (and quite raunchy) song. A better example might be future potential single “One Night,” produced by JFK and Yung Berg with popular singer Trey Songz on the hook.

“So what you want me to do – I’m doin all I possibly can ma
I been at the airport, waitin on standby
All this, just to catch a plane out to NY
And lay your ass down for one night
You know what I live like, yeah the mansion the coupe
You should have known I could never settle down with you
But girl I’ll see you in Atlanta when I’m bouncin through
I got 24 hours for you – Trey talk to ’em!”

Berg’s just a jigolo, and everywhere he goes, ladies know the part he’s playing. It seems the Chi-Town native is either thinking about his last sexcapade or his next one on nearly every song on this album. “Manager” featuring Lloyd is not about a shady music executive, it’s about the way Berg would like to control a woman “from the kitchen, from the bed to the couch.” Don’t expect “The Business” to be about industry rule #4,080 either, as Berg and his guest star Casha use that Auto-Tune effect that T-Pain has made famous to give each other the SEX bid’ness stroke for stroke. I think the song title “Get Your Number” is self-explanatory, and the fact Amerie is on the track seals the deal. You certainly can’t say Yung Berg has problems pulling guest stars, but this young man might want to tie a knot or two in his libido for the sake of hip-hop credibility. Thankfully there are at least a FEW songs where Yung Berg talks about grinding someplace OTHER than the bedroom, such as his duet with fellow Chicago native Twista on “Where Do We Go.” JFK gets props for using an Alan Parsons Project loop here, something very few hip-hop artists would think of, which results in a unique and fly track perfectly suited to Twista’s speedy flow (and as he often does he steals the show).

JFK and fellow Yung Berg producer Rob Holladay both have a flair for beats, the latter showing his steelo again on “Outerspace,” although the title is somewhat misleading since Berg is not travelling at the speed of thought across the universe. Nope – “Outerspace” is just a metaphor for the orgasm he’s going to give whatever woman lucky enough to share his bed. I’m not sure there’s been a hip-hop artist with this much seed to spread since Luke Skyywalker. Thankfully he slows down enough at the album’s end to take a “Victory Lap” with Collie Buddz and the long missing-in-action Eve, although even the latter seems to be playing femme fatale to Berg on the song. I don’t want to be misunderstood here – I think Berg is a talented young cat with a bright future in rap who seems to have a knack for working with the right people (well except for Junior). The problem here is that the near single-mindedness of his subject matter on “Look What You Made Me” shows EXACTLY what he’s been made by one too many music videos with jiggling booty and coochie – a nymphomaniac. That’s fly for the radio, the dancefloor, and for a slew of clips on MTV but to connect with his audience he needs to take a little advice from fellow Chi native Lupe Fiasco – give the homies on the block something REAL.