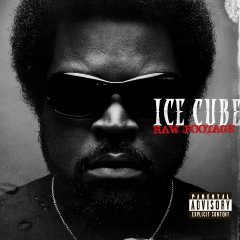 “You niggaz know my pyroclastic flow.”

Okay O’Shea. We’ve let you get away with a lot of things over the years, including a few awful comedy and sci-fi films and at least one half-assed compilation of songs FROM said films among others, but now you done did it. PIE-ROW-CLASS-TICK does not roll easily off the tongue. Sure it’s an actual English word but I don’t see rappers shoving each other out of the way to use it in song just because you spit it six months or so ago on “Gangsta Rap Made Me Do It.” Quite frankly it’s a ridiculous sounding word and just because you put an intro on “Raw Footage” explaining what it means (“red hot lava mixed with saliva”) doesn’t get you a free pass. Why should we let Mr. Jackson get away with a word this absurd?

I had a lot of time, six years in fact, to assume that Ice Cube was done with rap and had gone Hollywood for good. The 2006 release of “Laugh Now, Cry Later” was a firm reminder that Cube had not abandoned his hip-hop roots and a pleasant surprise musically to boot. Quite frankly “Gangsta Rap Made Me Do It” was too. Despite the comical nature of Cube’s new lexicon the banging Maestro piano beat was as serious as cancer, and Cube raised some good points about the public’s desire to blame hip-hop for all of society’s ills. It seems Cube even correctly predicted the ridiculous shitstorm of controversy that would cause Nas to change his album’s title.

The strength of this song had me looking forward to “Raw Footage” for months and months, hoping the attitude of the song would be endemic of the album while avoiding the desire to make up absurd new words. “I Got My Locs On” gets things off to a slow start though, as the PnO beat and Young Jeezy cameo result in the hip-hop legend trying to flow like his new jack co-star. It’s awkward, depressing and entirely skippable. You should consider “It Takes a Nation” to be the album’s TRUE opener, because Emile’s beat rattles the walls and Cube is so amped up with his lyrics and delivery you might think it’s 1991 all over again:

“I got King Kong in my trunk, King Kong in my doors
My nuts play ping-pong from the noise
You can hear me from a block away
I’m sittin next to yo’ ass and can’t hear, what you got to say
My shit is loud, my ears is ringin
My paint job is wet, my chrome is gleamin
I feel like a vet ballin on these rookies
An old school bully, you must have played hooky
I bring it like a bookie my aggression is depressin
Don’t give a motherfucker time to learn his lesson!
A LUNATIC! Y’all know what I represent
The only rapper who wanna fistfight the President!”

Now THAT’S the Ice Cube I want to hear. Every now and then Keith David (who you either know from Navy “accelerate your life” ads or the movie “They Live” depending on your age) drops in to add a voiceover to Cube’s presentation, which intentionally gives “Raw Footage” a very cinematic feel that’s not nearly as uncut as the album’s title. Cube’s “Hood Mentality” is such a track, and the Teak Da Beatsmith beat is a set-up for Cube to lambast negative urban environment stereotypes. If you only listened to the verses espousing Barry Bonds and Pacman Jones as role models and alcoholism as an acceptable lifestyle you’d miss the chorus that flips the script: “If you don’t want to shake that hood mentality, how the fuck we ‘sposed to change our reality?” Dope. Teak also shapes an outstanding sonic landscape for the thoughtful “Why Me?” The song finds Cube sounding just as perplexed in 2008 as he was on “Who’s the Mack?” back in 1990, and outright blasts hip-hop music videos: “I don’t give a fuck what you saw on TV but a one-eight-seven don’t make an O.G.”

The more tracks Cube raps with Teak on the boards, the more it seems like he has found his 2008 muse to take the place of DJ Pooh and Sir Jinx. “Cold Places” presents an apocalyptic view where even funerals can be sponsored by corporations, yet Cube still urges listeners to survive by keeping their heads up and staying aware. “Thank God” bounces, funks and swangs and offers this ballsy statement: “Stop looking for the best rapper, God damn it, here he is!” Other producers than Teak make dope contributions though, and that’s a good thing since there’s 19 total tracks on the Best Buy version of the CD. ‘Baby Dubb’ hooks up some of the dirtiest funky horns heard in a long time on “Tomorrow,” where Cube takes downloaders to task for jacking more than just beats. Old friend and long-time WC compadre DJ Crazytoones gets super smooth with the William DeVaughn groove on “Stand Stall.” Speaking of WC, you can hear both him and The Game sharing the limelight with Cube on “Get Use to It.” The album’s official closer is the excellent “Take Me Away” featuring Butch Cassidy, but if you have the extended version you’ll get the Swizz Beats produced “Don’t Make Me Hurt Ya Feelings” and a live performance of the Scott Storch produced “Why We Thugs” among others. By the time you reach the end of “Raw Footage” you’ll actually be convinced Cube really is PIE-ROW-CLASS-TICK. This is Cube’s strongest performance musically and lyrically in many many years, so he’s not only forgiven for using such an absurd word, he’s actually given me hope that it might eventually show up in the hip-hop dictionary. YAE-YAYYY!