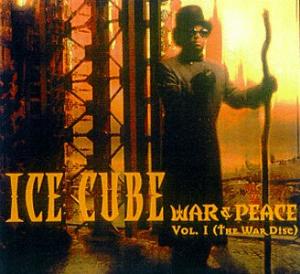 A friend and I were sitting in a restaurant booth.

My friend wasn’t going to let me off that easily. “Like him?” he said. “Man, Cube used to be your hero.”

I studied my pasta, trying to think of something to say.

“Yeah, Cube was my hero,” I finally admitted.

“Cube was everybody’s hero,” he said.

Ice Cube has classic (and platinum) albums, enough money to comfortably retire, and a wife and kids. I don’t expect a man in his position to make incendiary, fuse-lit manifestos like “The Nigga Ya Love To Hate” or “The Product” or “We Had To Tear This Muthafucka Up.” The scowling young man from Compton, who licensed, patented and trademarked angry, precise ghetto commentary, is no longer with us. The 1998-model Ice Cube stars in movies with Jennifer Lopez and probably has to practice in a mirror to get the scowl right. Really, what does he have to be angry about? I’m not hoping for another classic, just a few good beats, strong lyrics and tight flows.

With such low expectations, I don’t expect to be disappointed.

“Ghetto Vet” should be an affecting tale of a crippled ex-baller. Instead, the heard-it-all-before lyrics cause me to drift. I find myself listening to the piano line, wondering if it was replayed or looped. “Penitentiary” – one of War’s few attempts at social commentary – is intended as an indictment of the politics and economics behind the American penal system. It’s not bad; the chorus is interesting. But with lyrics like, “The pen’ is unfair” (who knew?), Cube is only skimming the surface. Similarly, “Extradition,” “The Peckin’ Order” and “3 Strikes You In,” show potential, but ultimately succumb to clichÃ© and lack of emotion.

It gets worse – “Cash Over Ass,” “Fuck Dying,” “If I Was Fuckin’ You,” “Limos, Demos & Bimbos.” These are actual song titles, not parodies. Cube, and by now everyone else, has visited (and revisited) these topics. Apparently though, Ice Cube intends us to take this stuff seriously. On “Limos, Demos & Bimbos,” there is no mention of demos. I guess the title just had to have three words. Cube opens “If I Was Fuckin’ You” with, “If I was fuckin’ you/Right about now, you’d have a dick stuck in you.” Really? So that’s how fucking works then. Enter the obligatory moaning girl. The voice-over guy is finding the phrase “suckin’ on semen” funny. Is that funny? Am I missing something? On “Extradition,” Cube says he wants to be “rich like Trump.” I think that metaphor is taken. Frequent guest-rapper Mr. Khop warns that he’ll turn green like David Banner. That one is taken too.

While listening to 70 minutes of new music from Ice Cube, there was no reason to engage my brain or emotions even once. Coming from a rapper of Ice Cube’s extraordinary ability, this album would piss me off except that it has left me too bored to care. And Ice Cube agrees with me. He accurately sums up War thusly: “While you worryin’ about five mics/I’m in the limelight/With movies coming out.” Cube, you’re supposed to worry about the quality of your album. Our hero would.