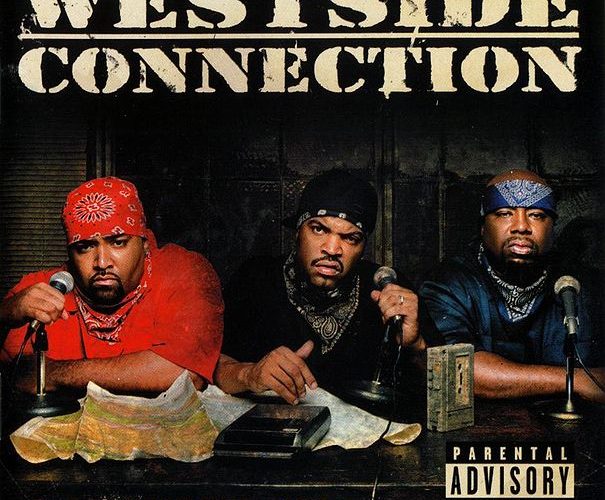 The Westside Connection hasn’t had a new album since 1996 – where have they been? Ice Cube hasn’t had a new solo album since 2000, but he has kept busy with a well-established Hollywood career including roles in “All About the Benjamins” and “Barbershop.” Mack 10 released “Bang or Ball” in 2001, but has only been doing compilation albums since. Of the trio, only WC has a recent release, “Ghetto Heisman” in 2002, and makes a cameo as one of the toughest wrestling opponents you face in the video game Def Jam Vendetta

. There’s no doubt that they’re all talented individually, and Cube in particular has a large and impressive catalogue from his long years in rap, but since “Bow Down” in 1996 their impact on hip-hop has in truth diminished greatly.

Far from ready to hang up their khakis and Chucks though, the trio of G’s has reunited to put the fear of “Terrorist Threats” back into music. There’s no mistaking their point here – they want to be compared to history’s most evil men. “Ice Cube is an asshole just like Castro,” quips O’Shea Jackson. “When we touch down, we turn niggaz hoods to the Gaza Strip,” brags WC. “Like that Al’Qaeda love we can blow up together,” claims Mack 10. Don’t be scurred of these similies though. They’re not attacking America, they’re declaring war on wimpy hip-hop music. Mack 10’s opening verse on “So Many Rappers in Love” says it all:

Who would have thought that the Westside would be the saviors of hardcore, leading their disciples to the promised land? They would, and they believe in it to the death. They’ve recruited some excellent soldiers to lend tactical support as well. Fredwreck provies the beat and Nate Dogg sings the hook on their lead single, “Gangsta Nation,” where W.C. is quick to bumrush all their imitators right out the door:

“Homey I’m tired of these niggaz barkin at shit, talkin the shit
From the concrete but ain’t chalkin the shit
In videos in a bitch pose and a throwback
Holdin a gat, ain’t gon’ bust, and know that!
It’s a Dub S.C. thang Dub C brang
And we don’t FUCK with niggas in khaki G-strings
Fuck I’m clearin the crowd
It’s that who-bangin bandana cri-mi-ni-mi-nal, the ori-gi-nal”

Perhaps there is something to their declarations of evil after all – these Westside Connectors sound as focused and motivated as they have in years. “Lights Out” kicks rocks with Knoc-Turn’Al on the hook and Damizza on the beat. “Superstar” has an ironic sub-title, “Double Murder = Double Platinum,” and Cube spits witty quips over the Megahertz beat like “the most dangerous, angriest lyrics that a thug got ain’t enough – nigga where your mug shot?” and “I can’t bump yo’ shit if you never was shot.” He’s also cynical as fuck: “You’ll learn about loyalty when the record company try to fuck your family out the royalty.” THAT is the Ice Cube rap fans have been wanting to hear from for over a decade. The lesser known producers turn in bangers as well: Young Tre sounds like a solid Dr. Dre protege with his deep bass and funk on “Call 9-1-1” and “Potential Victims,” while Bruce Wayyne and Dirty Swift attack like Batman & Robin on “You Gotta Have Heart” and “Izm.” Don’t forget Pockets and Rashad Coes though, as they co-produce the smooth shit like “Pimp the System” featuring Butch Cassidy and the aforementioned “So Many Rappers in Love.”

In short, this album is something of a surprise. While using terrorism as a gimmick could have resulted in the kind of banal mediocrity found on The Diplomats double album “Diplomatic Immunity,” the West coast supergroup has drawn perhaps the only possible good lesson from a jihadist they could – striving to succeed despite all obstacles. WC’s words on “You Gotta Have Heart” sum it up best:

“I was raised a young nigga with squabble
In the city of loc’s, no hope for role models
The black sheep of the family, destined to fail
Predicted to spend my whole life in a jail cell
Fucked up by not believin the hype
I knew I’d be more than a felon, and soon Dub’ll see the light
Nigga got my mind right and nigga got my grind tight
And now a nigga’s gettin paid to skip skip through the limelight”

Sounding superior together to anything they’ve done in the last seven years seperately, Westside Connection’s “Terrorist Threats” could mark the emergence of a new movement in and for gangsta rap. While not greater than the N.W.A. of lore 15 years ago in which Ice Cube also played a starring role, both groups have one thing in common – their use of violence and explicit language promote self-awareness and political rebellion as WELL as record sales. Maybe the comparison to Fidel Castro is apt after all.