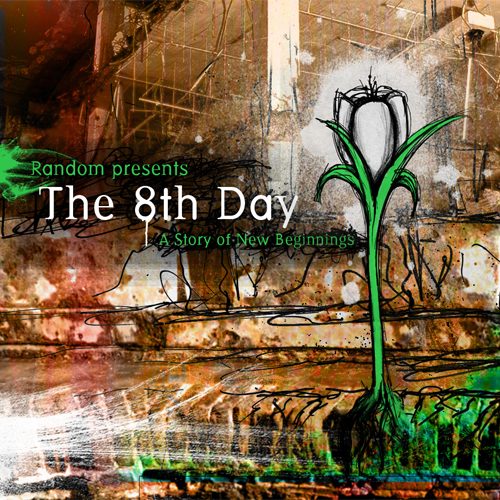 Random is a teacher, the kind who gives homework and grades papers and holds court in front of a classroom full of rowdy kids on a daily basis. This means he is not your stereotypical MC, bragging about cooking crack with a wrist full of ice while a stripper writhes in the background. Random is striving to make hip hop positive and meaningful. His label, RAHM Nation, proclaims itself the “Reform and Healing Movement.” Beyond releases by like-minded hip hop and soul artists, they offer courses on hip hop history and essays on the art form. Clearly, they are not just in it for the money.

“The 8th Day” is Random’s third album, following 2006’s “The Call,” 2007’s Mega Man-themed “Mega Ran,” and “Patches and Glue,” which came out earlier this year. The concept of the album is new beginnings, and the title track imagines a world in which:

“A bunch of folks got tired of hearing rhymes that ain’t true
It was time for a change, they thought
So the Committee for Lyrical Dishonesty, a Cold for short, was formed
Founded by the people with a simple mission
Rid the world of all the fiction that rappers be spittin’
They headed a department that would research rhymes
Verify the details of the crimes in their lines
Whatever they would find
They shared it with the public
And rappers would get arrested if they were discovered”

The result, in Random’s imagination, is that the artists in the Top Ten would be cleared out, and Clear Channel would be forced to start playing more conscious artists.

“Fans rejoiced, radio was resurrected
Labels worldwide were starting to get the message
Magazines shifted to what would sell
So Mos Def reached the cover of the XXL
Then the source shot back with a Kweli cover
Tried to get both of them cats to beef with each other
But they held it together and hip hop was winning
But this wasn’t the ending it was only the beginning”

Sure it is a fantasy, but it calls out one of the unspoken truths of hip hop: so is most so-called hardcore rap. Gangsta rap is a fantasy of life on the streets, one in which the kids in the streets get to be crime bosses and not just victims or low-level foot soldiers. Everyone wants to be Scarface, but they forget that Scarface dies in the end. What Random is dreaming of is a world in which “keeping it real” comes to mean rapping about real life, and not just bragging about how much time you’ve spent in prison, or how many people you’ve shot.

In the spirit of keeping it real, he offers “Left Behind” and “If It Weren’t for Bad Luck…” about the struggles of being an underground rapper. He also comes clean about his geek tendencies on “Reset Button,” which gives a shoutout to the “freaks and geeks” and nerd culture. “Exhale” is a loving tribute to hip hop with guest verses by Naledge of Kidz in the Hall. The album closes with a remix of “Fly” that reimagines the song over a jazz beat. Like most of the songs on the album, the production is crisp, solid, and better than what you might have come to expect from an independent release. This much is clear: Random is no amateur.

Sometimes Random’s teacherly leanings get the best of him, and his rhymes can come off as lectures. Anti-drug song “Placebo” is old school in every sense, from its beat to its Fresh Prince style rhymes that criticize prozac, of all things. “Granny Smith” is the story of a boy from a broken home that is touching but heavy-handed. The fact that his heart is solidly in the right place makes these clumsy rhymes forgivable. He also nails cautionary tales on tracks like “Last Time,” which tells a heart-wrenching tale of inner city strife and alienation, all with the chorus of “you said this was the last time/I don’t believe you.” “The Hush” has a banging, buzzing DN3 beat which Random uses to spin the tale of a young man tempted by the life of a drug dealer. On this track, he manages to rein in his lecturing, and instead tell a harrowing and all-too-familiar story of life on the streets.

Random can rap, and he has a clear, confident flow. When he manages to curb his teacher tendencies, he creates music that is thought-provoking and banging. He’s also part of a movement in hip hop that is trying to grow the art form in positive ways, and rid it of its more self-destructive tendencies. “The 8th Day” is a solid step in the right direction, and I hope it leads to the rebirth of hip hop that Random is striving for.