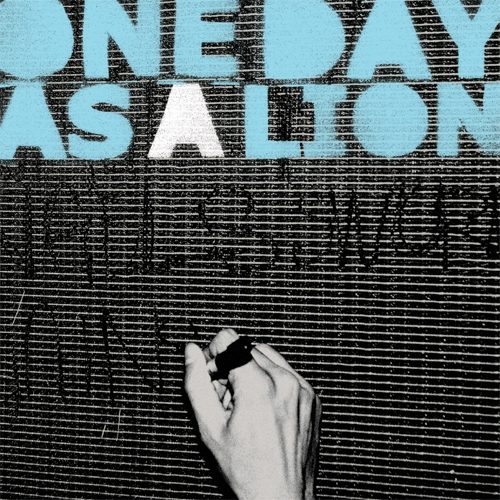 Quick question – who is most political lyricist on the mic of all-time? Some newbies might lean toward Dead Prez or Immortal Technique, though particularly the latter can lean a little more towards conspiracist. Those that expand their horizons would be wise in choosing spoken word phenom Saul Williams. Old school cats would probably go with Chuck D (of Public Enemy) who really introduced this element into hip-hop music. But, those that are not particularly play rap favoritism might look at Zach De La Rocha of the rock group Rage Against the Machine and say it’s that dude. True to its name, the rock group really found a core group of equally angry fans who found truth in the scathing lyrics of “Bulls on Parade” some twelve years ago. People flocked to some of the most energetic live shows of all-time. Now Zach is back with the same philosophies he had when he was rhyming over Tom Morello’s (of Audioslave) crafty guitar work. “One Day As A Lion” sounds like a missing limb of RATM’s catalogue, for better or worse, depending on your tastes.

De La Rocha has always evoked the feeling that he is a rapping over rock beats and has showed interest in more straightforward hip-hop music by teaming up with KRS-One and Last Emperor on the “Lyricist Lounge Vol. 1” for the track “C.I.A.,” a true gem. Yet, he still maintains his rock/rap hybrid feel on “One Day As A Lion.”

I’m not sure if 20 minutes of music will really please his avid fanbase who have had a painstaking wait for several years, but “Wild International” and the title track are well worth the price of admission (it retails for about 6 bucks). On both of these tracks there is kind of a clever use of distortion that makes a sound so similar to Rage that it seems Zach might be looking to reunite with Morello plenty soon enough.

“Wild International” is just an example of the angriness Zach De La Rocha conveys in his rhymes and his anti-establishment attitude with lines like, “With the M1 millimeter let the chamber of the hit em/Let the rich play catch with em/Better yet, let em eat em and shit em/Till they’re so full of holes that that they drown in their own.” It’s not music for the faint of heart or those that are easily offended, but it can be construed as truthful from certain antagonized perspectives. The effectiveness of the track relies heavily on the chorus as well, which goes as such:

“Both Mohammed and Christ word life would lay your body down
To a tune so wild international
In the desert full of bullets let your body rot
With my chrome, with my verse, with my body rock”

Anytime a casual rap listener hears the phrase “body rot” they likely think of some horror core shock rap, or hard metal, but Zach’s style cannot be accurately placed in either of these musical genres. More hard rock than anything, what makes the front man so special as an entertainer is his ability to transcend simple categorization.

The EP is in all out attack mode as he questions certain aspects of culture like religion and a misguided government. Choice lines like, “I target more heads than a priest on Ash Wednesday” and “They heard word of two on the terror list/hid in the pews just two city terrace kids,” are fully representative of One Day As A Lion.

For an EP that has been nearly a decade in the works, it is a bit lacking. The songs from an instrumental standpoint mostly blend together, not doing enough to differentiate themselves from one another. The same could be said about Rage Against the Machine, but this feels like a pale shadow of comparison to Rage. Morello is a genius on the guitar and did not need to go to the synthetics of the keyboard to make his unique sounds. Plus, some of the production here seems to drown out De La Rocha’s otherwise very nice lyrical fire.

The lion is the king of the jungle and somehow this group has the same predatory feel as that symbolic feline. One Day As A Lion offer a raw, gritty, energetic sound with their short EP. However, the comparisons to the flagship revolutionary band that the front man was originally part of will inherently exist and possibly create a sense of disappointment. Once you get rid of those preconceptions and give the disc a few spins it grows on you. Still this EP cannot be recommended for who I consider our core group of readers unless you are familiar with his previous material and know you enjoy it, but the level of talent is undeniable.