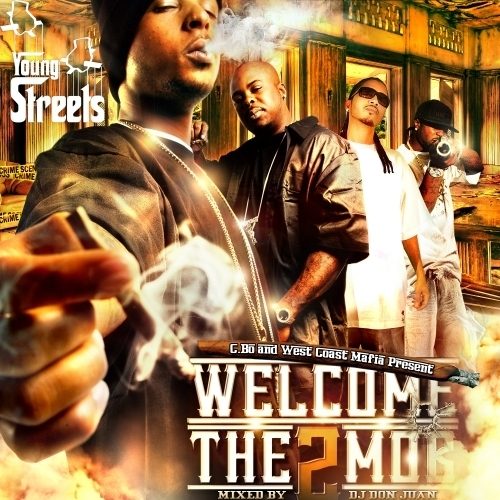 Often times, the story behind the music is much more interesting than the music itself. C-Bo is a west coast legend who has created controversy his entire career. Heralded as the most gangsta and hardcore rapper when gangsta and hardcore rap ruled the airwaves, C-Bo created a cult following that has stayed with him to this day. C-Bo’s status as a legend was cemented when he became the first and only rapper to be arrested over his lyrical content as a judge deemed his record proof that C-Bo had violated his parole. With songs like “Baldhead Nut” and a steady stream of solid albums, C-Bo has actually lived up to most of the hype behind his story. The same can not be said for those that have come after him. With the exception of the Mob Figaz, C-Bo and his West Coast Mafia Records have yet to provide us a single successful rap act. Their affiliation with C-Bo has been the only interesting thing about rappers like Spade and 151. Young Streets is the latest rapper to be pushed by C-Bo and he too fails to leave any sort of impression.

“Welcome 2 the Mob” is a mixtape meant to showcase Young Streets, a rapper so intent on imposing his gangsta on you he modeled his logo from the classic puppet Godfather logo. The problem with Young Streets is the same problem 9 out of 10 rappers have â€“ a lack of originality. See, Young Streets is convinced he’s more gangsta than the last gangsta rapper you heard, in the same way rapper X says he balls harder than rapper Y and rapper Y retorts he flosses harder than rapper X. Of course, both rapper X and Y show up at the Ozone awards with the same model car, same size rims, and same number of diamonds on their chain. When you put rappers X and Y over a danceable beat with a semi-catchy hook, you tend to forgive the stupidity of their boasts. Without the candy coating, their baseless claims really do get annoying. Young Streets is a gangsta rapper with no candy coating. It’s really quite astonishing, given we have proof that Young Streets has heard of C-Bo and watched The Godfather. The Godfather was a ground breaking movie way before it was a gangsta rap clichÃ©. Famous for exposing the world to a guarded mafia culture, the movie also succeeded in mixing violence with family values and love. Don Corleone and Micheal Corleone perfectly personified the complicated hero/villain character. C-Bo on the other hand actually lived up to his boasts and brags by giving us rap that was actually more hardcore and gangsta than the stuff on the radio. Both the movie and the rapper did something new and original and both ended up successful in their own way. For Young Streets to have these influences and not learn a thing is simply criminal â€“ and not in the cool, record selling way.

The only thing Young Streets seemed to have learned is how to mimic every other mixtape rapper in the game. He has guns the size of midgets, he wears Fendi pajamas, he gets sexual favors from groupies who used to hate him before he was famous. The only credit I’ll give the man is that is seems he at least avoided jacking beats for every song on this mixtape and has a few original beats on this joint. I also have to admit he isn’t the wackest rapper on his mixtape, which is always a good thing. “Soft as Shit” features a rapper named Chaz spitting over the “Crank Dat Soulja Boy” beat and declaring:

“You inside peanut butter, outside jelly
Soft as a motherfucker, sweet as a cherry”

What does the first line even mean? Is there some red skinned, brown-blooded creature out there? Did Chaz completely miss that Cadillac Don and J-Money were talking about a car? Was that line dope enough to warrant a quote?

Young Streets can stay on beat and his voice isn’t irritating. Those are the only compliments I can send his way. The only interesting tracks on this mixtape are the few tracks featuring C-Bo, Outlawz, and Young Buck. Matter of fact, Young Buck’s current situation and the success of his Cashville Records is another back story that is much more interesting than anything Young Streets has to say. Basically, avoid this unless it’s free and even then keep your expectations low.