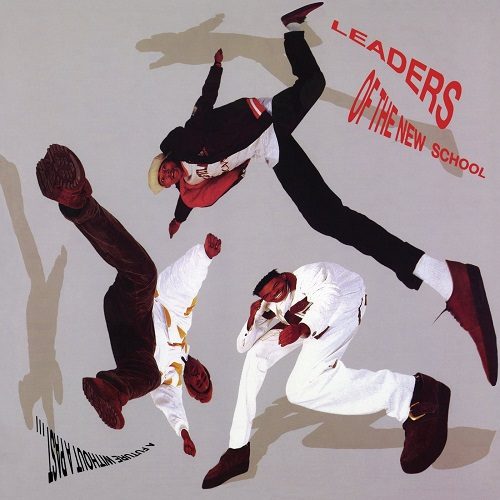 Leaders of the New School :: A Future Without a Past…

Charlie Brown: “A room of teachers, parents, and preachers
A principal and one kid dressed in sneakers
Case of Brown vs. The Board (ORDER ORDER)
Yo – well, verse one is a slaughter
I pleaded my case – AAH, face to face – AAH
It was a waste, still everyone was in place, yo
Pronounced me guilty, you have
THREE HUNDRED SIXTY FOUR DAYS
of detention to serve – SOME NERVE!!”

It’s hard to go ‘Back to the Lab’ on “A Future Without a Past…” without the album affecting me personally, so for at least one paragraph I’m going to have to be frank with you the reader – this album is VERY meaningful to me. This album came out right in the middle of my time in high school, at a point of turbulence in my life where the only thing I was sure about was how much I loved hip-hop. Everything that Charlie Brown, Dinco D and Busta Rhymes had to say on “A Future Without a Past…” seemed to ideally reflect some aspect of my life. “Sobb Story” encapsulated my car woes as I tried to be cool with a hand-me-down hooptie for a ride. “Case of the P.T.A.” spoke to my frustration with a hidebound school system that seemed like it was constantly out to get me. “Feminine Fatt” described the kind of girls I was most attracted to, and “Teachers Don’t Teach Us Nonsense!!” perfectly summed up why high school seemed like a big waste of time – I couldn’t wait to get the hell out of there.

Busta Rhymes: “In school, the brainwash epidemic
Gotta hit ’em back with a rhyme calisthetic
Got enough beef with the kids who be switchin
Now I’m in school, and yo the teacher starts riffin
Dis and dat, and yo it’s all irrelevant
As I get older gotta build my own intelligence
TEACHER, what are you doin?
Is it my rhymes that you’re really tryin to ruin?
Back of the class then I come FORTH
The water lies between us, it’s time to CROSS
Me being the younger, him the elder
If we were in a war, he thinks I’d surrender
Kids on the block just scramblin AHHH
Cause the teacher’s in class just babblin OOOH
They’re teachin nonsense, teachin total nonsense
Then they wonder why we so disobedient”

Twenty some years later, I look back on “A Future Without a Past…” and realize this album among others helped me hang on to what precious little sanity I had. Even if everything else seemed wrong, I could put my headphones on and pop in this album, and feel for a moment like things made sense again. The irony here is that Leaders of the New School (commonly then and henceforth now abbreviated to LONS) was a group doomed from the start. The exuberant personality of Busta Rhymes was evidence on track after track, and once the songs received video treatments, his larger than life persona only grew further. Even as things in my own life made more sense, for this Long Island group the “Future” was bleak. The success of the first album made them stick together long enough to record and release a second, by which point the rising stardom of Trevor Smith had irritated the other rappers to the point they had an embarrassing public fight on Yo! MTV Raps right before breaking up.

It’s amazing how well the group worked together on “A Future Without a Past…” but make no mistake about it – when D, Brown, Rhymes and their DJ Cut Monitor Milo were on the same page they DID work. Even though high school was an overriding thematic structure for the album, with skits like “Lunchroom” and “Afterschool” tying things together, the glue was actually how the rappers bounced off each other like rubber over the beats. Bomb Squad producer Eric ‘Vietnam’ Sadler helped shepherd the young emcees in the right direction on both the songs he produced and the role he played overseeing the project. Coming as it did before sampling became a crime, this album is informed by classic beats and breaks throughout. The epic posse cut “Sound of the Zeekers” featured “Blind Alley” by The Emotions and “Express” by B.T. Express among others, and as Busta’s debut as a producer it worked beautifully. Dinco D and Milo were no less skilled behind the boards on “My Ding-A-Ling,” sampling both “Apache” by Incredible Bongo Band and “Hook and Sling” by Eddie Bo.

Most of the time LONS stuck to the microphone side of the craft and let other people do work behind the rhymes. Backspin made the jazzy and percussively heavy “Too Much on My Mind” flow nicely, hit a frenzied note chopping up Bob James on the intense “Show Me a Hero” and flipped things in a funny way on “What’s the Pinocchio’s Theory?” Sadler contributed frequently, such as on the aforementioned “Sobb Story” as well as the travel anthem “Trains, Planes and Automobiles” and the pre-9/11 warning about terrorism “Just When You Thought it Was Safe.”

Dinco D: “My man, to take that plane overseas (the seas)
And then the terrorist group of killer bees (the bees)
Claims a bomb is on board your flight
And due to explode then ba-ba-boom (B-B-B-Bang!)
Now you’re on a mission to nowhere (nowhere)
Like an innocent victim, it’s sad
Quite a shock, and really disturbing
(Just when you thought it was safe!)”

If one song could sum up this album perfectly it might be “The International Zone Coaster.” Although the least successful of all the singles released off the album, the Dante Ross production and opening rap by Busta Rhymes started things off perfectly, as the then-unified crew relished their youth and spit eager verses about how eager they were to SPIT verses – happily ditching their other responsibilities to party and rhyme.

Charlie Brown: “Call Busta Rhymes, what’s up my man?
(Having a party, understand?)
Where’s Dinco D, you know, the D?
(Here’s the phone) (Sup C.B.?)
I’m coming (Hurry up, hurry up!)
Milo started throwing on all the cuts
Walk into the crib and I heard “Hello”
Turned, it was Epitome and Shemello
Told them the scoop and I kept stepping
Almost had to stop and I started sweating
Rob pulls up, he says “Come on get in”
Place it was packed with stupid skins
Got to Busta’s crib and grabbed a 40
Crackerjacks habit, naughty naughty
Grabbed the gold tone microphone
Woke up Saturday… I zoned”

You never would have guessed the tension and disharmony to come listening to this song – I surely didn’t. “A Future Without a Past…” stayed in heavy rotation for many years after its release, even when I graduated high school and went off to college, because the natural chemistry of the crew and the funky freshness of the beats they rapped to were totally irresistable. Knowing what I know now doesn’t tarnish this album at all – it actually makes it more of a treasure given that Dinco, Milo and Brown all faded into the woodwork. On this album at least they are equal partners with Busta Rhymes, all for one and one for all, and for this brief moment in time they were in fact what Public Enemy’s own Chuck D had dubbed them – LEADERS. They were the forefront in hip-hop and made an album that is still easy to listen to and enjoy even today.

Leaders of the New School :: A Future Without a Past...
8Overall Score
Music8
Lyrics8