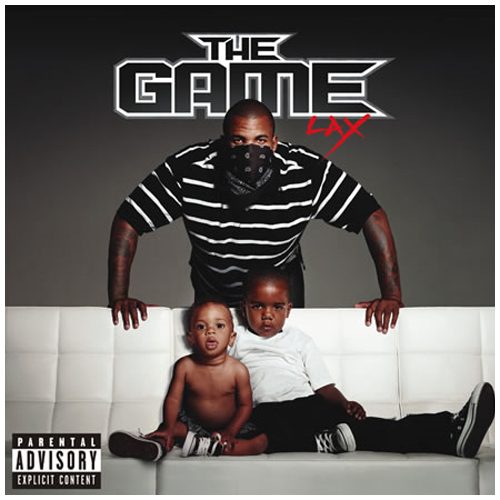 There are some people in this life that get laughed at all the time, maybe because of the strange way they look or their apparent lack of talent. There are some people that can’t seem to get along with anyone, as they watch, year after year, their relationships with friends and business partners turn to dust. There are some people that are so afraid of alienating people, they end up doing it as a result. Yet they somehow float to the top, even with a size 12 above their head trying to keep them underwater. Onlookers bitch about them, whispering to each other phrases like: “I could do what he does, he’s a joke…” or “That fool ain’t nothing, watch how badly he fails this time…” Yet still, they rise, get up on their feet, and do it all over again, against all odds. Hate it or love it, The Game is one of those people that will somehow rise to the top. No, I don’t know how either.

This is perhaps one of the easiest album reviews ever – first half solid but uninspired, second half bloody good (don’t worry, I’ll expand). However, writing about The Game and the build up to this album is a lot more difficult. Somewhere along the line, this cartoonish and two-dimensional character developed into a seemingly interesting story. In fact, the only thing that has stayed consistent over the course of three albums is his own peculiar “NameDropitis” version of Tourette’s Syndrome. Everything else has changed – his first album, “The Documentary,” found Jayceon Taylor riding with Dr. Dre and selling 5m. He then found himself (or drove himself to) being disowned by the Doc, 50 Cent and Eminem – yet somehow turned it into the superb “Doctor’s Advocate” album, filled with vitriol and psychodrama. Fine, it didn’t sell too well – just one big commercial club banger would have changed that – but it earned him immeasurable respect, and he achieved it without a Dre track. The problem that “L.A.X.” faced in advance of any release was this: what is the story behind it? The Dre situation has been played out and the 50 Cent beef is old – so what angle could The Game come up with?

This point should now be clicking in your brain – why does The Game NEED an angle? Why couldn’t he just put out an album full out dope beats, dope rhymes, and whatever the hell else he wants to do? The good news is that he has pretty much done just that. On first listen, it may seem that the angle is a poorly-executed “Me Against the World” Tupac impression, but that is misleading – keep going and you’ll see that, in the second half in particular, he really starts to express himself. On the surface, at least, the “L.A.X.” album is a triumphant middle finger to commercial success – and an apparent victory for strength and consistency. But scratch a little deeper than that and the truth will start to appear.

The album is divided up neatly, with a laughable DMX intro, seven songs, an intermission, a further nine tracks and a laughable DMX outro. The first part of the album kicks off with The Game attempting to spit double-time on “LAX Files” – notice the euphemism of “attempting,” for it is like watching a newborn calf trying to stand for the first time. Even if the chorus is melodic, it is still a slightly worrying portent for the album. Solid-enough Cali anthem “State of Emergency” features Ice Cube on the chorus, and another legend, Raekwon the Chef, turns up on the raucous “Bulletproof Diaries,” as their attempts to one-up about how hard their hoods are turns into a literal love fest for one another. The pre-requisite Lil Wayne featurette “My Life” is initially disappointing, but actually turns out to be another solid addition to The Game’s diverse portfolio. Not that we need another bloody track about “Money” but he actually does a pretty good job here, and follows it up with the strange but interesting “Cali Sunshine.” The final song in the first part is “Ya Heard” – and it sums up the problem with the first half of the album. The Game sounds nervous, uninspired and sleepy on both this tune and most of the others – and gets thoroughly shown up by Ludacris. Listen to how Luda incorporates names into his raps for a REASON, whereas The Game just starfucks his way into cul-de-sacs through mindless name-dropping.

After the interlude, The Game storms off the blocks with the excellent DJ Toomp-helmed “House of Pain” – and even if some of the lyrics are questionable, that GLINT in his eye is back. Some clever cross-promotion comes along with the lush “Gentleman’s Affair” featuring Ne-Yo, and a couple of tracks later, The Game gets in touch with his more sensitive side once more on the soulful “Touchdown.” The end result still makes him sound more serial killer than Casanova, but bless him, he’ll keep trying. Sandwiched between those is Chrisette Michele (we like) jazzing over Scott Storch’s “Let Us Live,” and the second half is off to such a good start that the predictably lazy beat of Kanye and the newly lazy rhymes of big movie star Common both royally fucking up “Angel” can’t derail proceedings (hot chorus, hot last verse). The weird Biggie karaoke of “Never Can Say Goodbye” is simply inexplicable, even if the beat – co-produced by The Game himself – is decent enough and concept relatively clever. “Dope Boys,” featuring Travis Barker banging his drums, is a lovely album track with Taylor dropping lines like “Your girl can’t say no to me, I’m like a wedding ring.” After which, the ever-excellent Keyshia Cole pops up on “Game’s Pain” where they basically list everyone that has ever sung or rapped, and pay “respect” to them. “L.A.X.” closes off in stunning style with “Letter to the King,” where The Game finally (and legitimately) equals Nas, as they both write to MLK. The Hi-Tek beat is perfection, and The Game delivers in style, whilst sounding like himself.

As I said before, the album review is relatively simple – the first half is decent enough, but The Game generally fails to shine, whilst the second portion is brilliant, and Taylor delivers hard over (ironically) more commercially hook-laden grooves. So I’d score Part I with 7.0 and Part II would get 9.0, for sure. Yet “L.A.X.” doesn’t FEEL like a simple 8.0 – it feels both better and worse than that. As an MC, The Game has both improved and regressed, and that goes for Jayceon the Artist too – there aren’t any moments on here as shockingly memorable as “It’s Okay (One Blood)” or as genuinely intriguing as the Busta-featuring “Doctor’s Advocate,” and Lord knows there aren’t any massive hits on here circa “The Documentary” era of his career, even with Lil Wayne’s help. Sure, as I said in the opening paragraph, he is one of those guys you can’t help but respect for coming back from the brink time after time, no matter how many metaphorical beatings he takes. Fine, it is better than anything any G-Unit member has released in the past three years, but how many moments on â€œLAXâ€ are truly incredible or, dare I say it, legendary? He has definitely still come back with an admirable album – I’m just not sure that it is as MEMORABLE as it could have been.