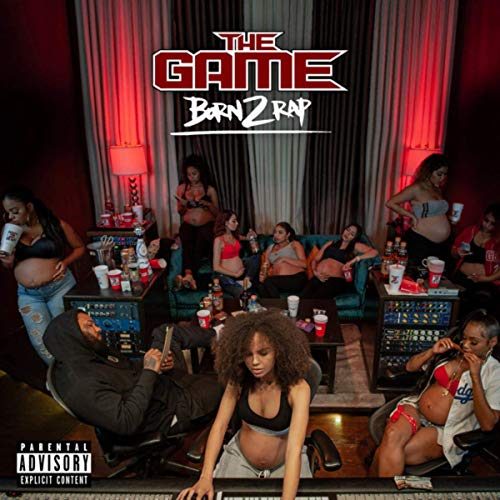 “Born 2 Rap” was originally titled “Westside Story” and was set to be The Game’s final album. Given the change of album titles and the continual drama that swirls around Jayceon Taylor, I’m now largely convinced that The Game isn’t retiring. He’s going to need to keep rapping just to keep paying his bills, legal and otherwise, and providing for his children. “Five Hundred Dollar Candles” featuring Dom Kennedy suggests the same thought has gone through his mind too. “39 and I’m still banging/I can’t get out if I wanted to/All I did was +Document+ my life/I ain’t put that red rag in front of you”. He’s married to the game whether he likes it or not.

The cover art for “Born 2 Rap” is also a visual double entendre. The numerous pregnant women in what is either a recording studio or the lounge outside of one implies he was literally “born” into rapping. The Game has been a natural at it since before “The Documentary” dropped so the truth of this assertion is self-evident. However looked at from an entirely different perspective, the many attractive women arrayed across the album artwork could be conceiving more Jayceon Taylors and making the next generation of Compton emcees he’d need to support financially until they came of age. If he says it’s his last album I take The Game at is word but songs like “West Side” will make you want him to reconsider.

While the “Mad Max” theme has been done in rap videos before (most notably “California Love”) it’s still visually arresting and lyrically powerful. The Prince Productions/Big Duke/WallisLane instrumental is understated but that only gives the raspy Taylor more room to breathe. As he has done through his career, those vocals and the emphasis he puts on words paints pictures on the canvas the beat provides. It isn’t always a pretty picture but that doesn’t make it any less fascinating or mesmerizing to look at. He also teases at the end that this really isn’t the end.

“In California, we got them pictures niggaz map out
In California, we turn a mansion to a stash house
I fuck around and leave a dub and they O.D. tonight
You in good hands, you know the Bloods gon’ treat you right
Ain’t tryin to be your man, no, I don’t trust ’em, I just beat it right
Gotta put her in a Uber just so I could sleep at night
Never stop bangin nigga, you know it’s still Cedar, right?
After this album nigga, I gotta raise the feature price”

Whatever the future holds for The Game, “Born 2 Rap” is intended to be a statement album and Mr. Taylor has plenty of them to make. The late Nipsey Hussle is on “Welcome Home”, and extra credit to Bongo for sampling Lamont Dozier’s “Shine” on the track, one of my favorite loops dating back to when Pharoahe Monch rapped over it on “Mayor”. Singer Ed Sheeran appears at both the beginning and end of the album, although the emotional “Roadside” is the most suitable to his talents. “I keep the faith and try not to question God/but I got a problem when I see innocent people die” raps Taylor, proclaiming his solidarity with the oppressed everywhere and taking a shot at the President with the line “I guess we shouldn’t put our thoughts on the front of hats”.

That’s only the tip of the iceberg. Everybody he has ever worked with or wanted to is here — the past, present and future are all well represented. Trey Songz croons on the Streetrunner laced (and Kanye-esque) “Blood Thicker Than Water”, 21 Savage helps Taylor lay down “The Code” for staying true, Brooklyn legend Red Café is on “Dead Homies” and Grammy Award winner Anderson .Paak is on the Big Duke produced second single “Stainless” on a song recounting The Game’s entire career.

There’s so much going on with “Born 2 Rap” it’s very hard to take it all in during one listen, but I can cite one track in particular that sums up where The Game is at now — the Focus… produced “I Didn’t Wanna Write This Song” featuring Marsha Ambrosius. Taylor is clearly pained by Nipsey Hussle’s death and may even be at the “bargaining” stage of grief, wondering if the same God he finds it hard at times to keep faith in would let him trade places with the deceased.

“You had the Staples Center packed like a church
Whole South Central put they hands on your hearse
I wonder if heaven got a Slauson
You with Biggie and ‘Pac, look at you big as the bosses
Headed to a marathon, look at your nigga he flossin
Your legacy untouchable like Armenian crosses
On the days that I’m feelin exhausted
Think about uncle Snoop at the funeral talkin
This type of shit you don’t see that often
Stevie Wonder singin, he can’t even see yo’ coffin”

This is a 90 minute album and it feels like The Game is going for a magnum opus with this release. Both the length and the effort he put into it justify why it took over three years for it to come out and all the bases are covered here. If you want that old school West coast G rap it’s on “Carmen Electra” with Mozzy, Osbe and Toby complete with a re-interpolation of D’Angelo’s “Devil’s Pie”. If you want straight up shit talking and “empty Patron bottles” then “Gucci Flip Flops” is for you. If you want Taylor to address his still simmering beef with 50 Cent/G-Unit it’s there on “Hug the Block”. If you wanted him to rap like preacher at church there’s “Cross on Jesus Back” with an excellent appearance by D Smoke.

It’s hard to find anything to complain about even though that’s what a critic is supposed to do — criticize. Our Patreon supporters voted for this review and it’s not hard to see why. I was shying away from reviewing this album partially due to its length but mostly due to the fact I don’t want to admit that Jayceon Taylor’s career is over. I may be a critic but I’m also a day one fan. The Game’s career could have easily been short lived due to burnt bridges back in the 2000’s — his fault, their fault, doesn’t matter either way because once they were burnt he couldn’t go back. Despite those setbacks and in spite or because of the storm that constantly swirls around him, The Game has continued to come back with hit after hit and album after album. His career is a testament to testicular fortitude and rap resilience. If he truly decided this is the time to call it a day then he went out on a high note.