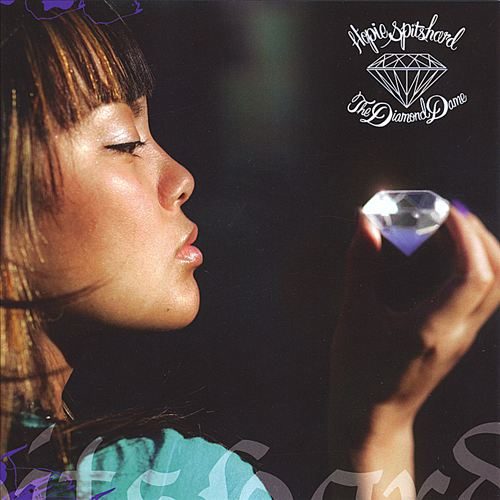 It was once thought that female emcees were obsolete in the highly male influential realm of hip hop. A struggle within itself, female emcees like Bay Area’s Hopie Spitshard have attempted to prove their existence for years and years. Venturing through this ongoing obstacle, Hopie Spitshard unleashes her strength with her debut album, “The Diamond Dame.” With production from up and coming Vallejo, CA producer, 6Fingers, “The Diamond Dame” seizes the opportunity to demonstrate the skill set of female emcees. While retaining her femininity yet liberating herself from the stereotypes and misogyny surrounding women in hip hop, Hopie Spitshard conquers the battle even further with her Filipino heritage as she builds upon any negativity through her own positive music.

As a female emcee, Hopie Spitshard affirms the idea throughout “The Diamond Dame” that she is exclusively holding up the fort for all the underrepresented women in hip hop. With it’s upbeat 1920’s inspired beat utilizing sounds of a classic phonograph and horns, “Supernova” features fellow female emcee EyeASage and delves deeper into the subject at hand. As her fierce rhymes and realism permeate throughout the track, Hopie Spitshard conveys the clear message about how female emcees can also excel in the hip hop industry as their talents almost supersede those of their male competitors. Exposing the reality that women’s involvement in hip hop goes far beyond the videos and sidelines, Hopie Spitshard shows:

“I heard it many a time
Plenty can rhyme, but not you
You’ve got a prettier face for video shoots
Can I recruit?
Girl, you must be trippin’
Rap is no place for women
Just have a rapper’s children
Get that ass inside the kitchen…
Even my boys admit
Oh what, oh what do I do?
I got a lot I could prove
Just got to get in the booth
To show them the truth of what I can do”

Hopie Spitshard boasts her lyrical flair in “A Big Deal” as the more abstract beat carries it through. With a hard hitting bass to commence the track, she delivers clever rhymes and elaborate word play as she says, “I’m kind of a kind of a big deal/ I’m one of a kind/So I’m kind of the one/You want me.” Elaborating on how she got her start with 6Fingers as an unheard artist, she expresses that now, “Hopie is hungry,” for rhymes that is. Hopie goes more in depth about her rapping skills as a female emcee in the bass driven “Trunk” as the more lighthearted, electronically synthesized beats on “Yummy” provides an more in-depth introspective look into what drives an unyielding rapper such as herself. Furthermore, clever sampling techniques are featured in “Like Ooohwah” as Hopie shows what it takes to be her man. Emphasizing that she is incomparable to any other female, she expresses that she’s the one that “you had always dreamt about.” It’s the truth; Hopie is like no other.

While Hopie Spitshard holds her own for the majority of “The Diamond Dame,” the collaborations and partnerships throughout the album only enhance her artistry. In the standout track, “Whatta Ya See,” featuring the infamous Del the Funky Homosapien and Kid Static, Hopie Spitshard feeds off of the expansive energy present as she adds her own individual style and flair. The funk driven track with bass guitar and almost muted flute emphasizes the talents from this trio as they expand on their aesthetic surroundings. As expected, Del puts out a spectacular performance as Hopie’s creative verbalization on the hook and verses is something definitely to be drawn into.

Paying homage to the classic Digable Planet’s “Rebirth of Slick (Cool Like Dat),” 6Fingers remixes the coveted track into a Hopie Spitshard version of “Fresh Like Dat.” Featuring Smigg Dirtee and Topkat, “Fresh Like Dat” plays on the well known sounds and lyrics from a standard of perfection and alters it into a modern reproduction. Topkat makes additional appearances in the 70s funk track of “What’s the Hustle” and also joins forces with Bambu of Native Guns in “Kings”, an upbeat track full of horns and echoing synths that relays the message about conquering adversity while rising above the rest.

Hopie brings “The Diamond Dame” back to a more personal level in “Hopie Smile” as she rationalizes the relationship between her and her father on the track that was written for him on one Father’s Day. With light keys, strings, and synchronized claps, “Hopie Smile” explores the importance of family and acceptance. With female vocals on the hook, Hopie takes her rhymes to a more poignant level as she explains the hardships her family has endured as she says:

“For, me, fuck
It’s rough enough growing up with
Dad crying in the next room because rent’s due
I’m going to pave the way for us
That’s the game plan
First generation to make it to the mainland
I love my family, man
But it’s a travesty when
Your child’s got the world on his shoulders
I was a young girl when I told him
‘I’m am build your happy home
Aren’t you glad you named me Hope?'”

Hopie Spitshard has definitely influenced the evolution of the female emcee on a more grand scale with the release of “The Diamond Dame.” Her eloquence, imaginitive lyricism, and collaborative efforts with production from 6Fingers has put her on the map, still proving that Bay Area hip hop is still alive and thriving. As female emcees have gone from being unappreciated and undervalued, Hopie Spitshard reinforces the fact that they can match wits with male emcees. Yes, the female emcee can still can match the patriarchy of what rap has become and possibly go beyond what was once impossible.