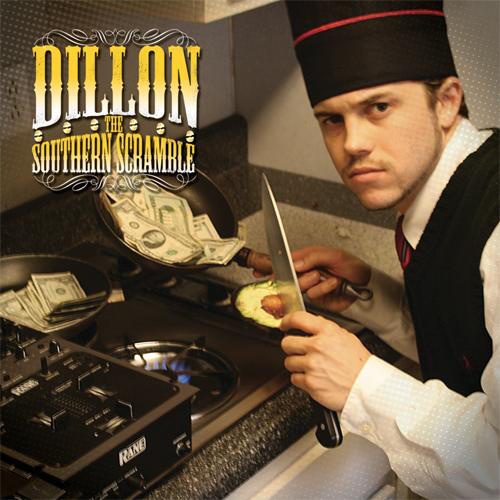 I am starving. Seriously. I missed breakfast today, and am craving some scrambled eggs, baked beans, sausages, toast and/or waffles. Well, luckily Dillon is here to sort me out with his mix/blendtape “The Southern Scramble.” I’ve heard that the fry-ups in Atlanta are something pretty special, so I’m looking forward to this. Especially when the cover features Dillon cooking fried eggs, pans full of cash and a Rane mixer stands perilously close to the gas flames (erm, be careful there – mixers don’t grow on trees, my friend).

It is all relatively simple – Dillon pieces together a whopping thirty-two tracks, most between one and two minutes long. Some tracks feature himself rapping, sometimes alongside other MC’s, whilst the rest are merely the underlay for guests to shout-out how much they love Dillon, or his “food.” It all flows nicely enough, although the continual shout-outs become grating after a while. The beats are solid, the MC’s actually rather good and the scratching is a pleasant side order.

Some of the best tracks on “The Southern Scramble” include the smart “Familiar Footsteps” and “Vitamin B” – as well as subtle little gems like “Stay Relative” and “Suntanama” featuring The Smile Rays. The energetic jazz of “Spin” features H2O and Therapy, and Dillon himself is an interesting MC. He has a smooth voice with a youthful impetuousness, and even if he isn’t going to win any “MC of the Year” awards, he seems to be a “clever ideas” guy. Meaning that he will drop the occasional jewel here and there, but more impressive is the initial concept.

When taken as a whole, “The Southern Scramble” is an interesting enough mixtape blended together pretty well – however, it does get a little bit too much at times, as such a large number of tracks isn’t easy to digest. Nitpicking aside, it still makes for a nice background listen, and it has obviously been crafted with a great amount of care. Assuming that this is a mixtape primer for a subsequent album, I would definitely be interested in hearing from Dillon once more – as well as sampling more of his culinary delights.