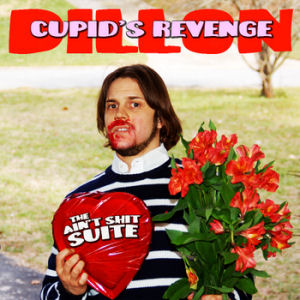 Just two months after “Studies In Hunger,” his LP with Paten Locke, Dillon is back with a five-song suite about love and outerspace. This time around he teams up with producer Batsauce, who lays down five tracks of jazzy beats.

The songs are short and sweet, rapidly going through the thrill of first love, the agony of heartache, and the peace of mind that comes from realizing that you were meant to date aliens. “New Love” sees Dillon excited about a woman he meets at a restaurant: “I’m not a catch/but I caught you/Mama even thought that you were the dopest chick I brought through.” All is not well in the house of Dillon, however, because by the end of the song, she’s disappeared.

He copes with that heartache on track two, “Heartsachord,” which features a beat built around a harpsichord and acoustic guitar. It’s a case many musicians are all too aware of: the girlfriend getting jealous of the man’s first love, music. It’s another short track, clocking in at a little more than a minute, but he manages to cram all the information you need into that short timespan.

“That’s when she hits me with the phone call
‘I am not feeling you anymore, baby’
Oh god
How could this happen?
I let it slip away
Saw it as a distraction
Now I am in disarray
And so the story goes
I was caught up in my passion
I hope my shorty knows
I’m sipping forty-ohs
Suffering from forty blows
Ten on each chamber of the heart that she chose”

“Nothing to Lose” is full of self-hatred and self-pitying as Dillon beats himself up for letting his love get away: “On a piano/playing out the blues/I refused to play to win you/So I play to lose.” The space-age bachelor pad vibe of “Fly Away”  sees Dillon bouncing  back, realizing that his girl was keeping him from realizing all his dream, and that in some way he’s been given the gift of freedom.

“Oh, you like the ride
Throw it into hyperdrive
Keep it moving on them ’cause I’m that type of guy
Came a long way from hanging in the basement
Captain at the helm is the motherfucking space pimp”

Dillon manages to balance the goofy with the serious, grounding his craziness and weed worship in real emotion and real lyrical skills. This was my first introduction both to him and to Batsauce, and based on the strength of “Dillons Revenge,” I’m looking forward to checking out their other projects. “Dillon’s Revenge” is a six-minute hip hop mini-opera in the vein of The Who’s “A Quick One While He’s Away.” It’s a series of brief musical moments tied together with a common theme and story. With space pimps. Plus, it’s being offered for free for a limited time only (http://dillonmaurer.bandcamp.com/album/cupids-revenge-the-aint-shit-suite), so you have no excuse not to listen to it.