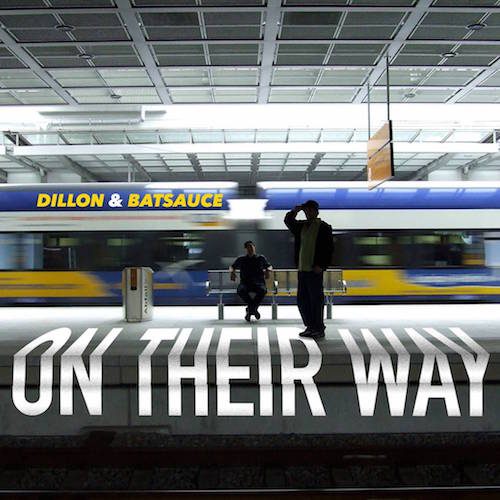 Dillon & Batsauce :: On Their Way

This is the kind of union I had never thought of before and immediately wondered WHY I had not. Fly producer Batsauce and underground Atlantian emcee Dillon coming together as a hip-hop team. Once I saw the two were working together on an album the slow CoFlow fire started to burn a little bit faster. What could they do in unison? Would this be another Guru and Primo? CL and Pete Rock? Not every team up of a good producer and rapper can be magic, but in a world that’s full of disappointment it never hurts to get your hopes up for something good to come along. “Keep Pushin'” featuring Sadat X was exactly the kind of result I was hoping for. If this was any indication of what a full length album could be like I did indeed have reason to be hopeful.

Shortly thereafter a watermarked copy of “On Their Way” was on its way to my desktop. At this point such preventative methods are unnecessary because this album hit retail locations on Friday the 13th anyway with apologies to you triskaidekaphobians out there. It leaves me wondering when everything switched over. It used to be that I’d go to the record store every Tuesday (or sometimes even at 11:59 PM the night before) to get all of the newest albums available. When did everybody switch to Fridays and WHY did they? There’s that word again. “Ours not to reason why” was the beginning of a math lesson I heard as a child. “Just invert and multiply!” That was never good enough for me though. Why did I have to? What was the reason? For Dillon and Batsauce I know the reason – they love making hip-hop. That love comes through on “Magma Mouth,” a track featuring familiar Dillon collaborator Paten Locke.

That theme fits all of the guest stars for “On Their Way.” Each one is a minor star in a universe of radiant WR 102 and 142’s, but no less visible in the night sky of the dedicated rap observer including the aptly named Qwazaar, a collaborator as familiar to Batsauce as Dillon is to Locke. You’ll have to forgive my stellar puns but you won’t have to apologize for playing “City Lights” to anyone. I wound up mesmerized by this song and kept it on loop for a little while. The bassline is head nodding, the scratches on the hook are tight, and the sounds on the instrumental twinkle like little stars all their own.

Other artists measured by stellar cartographers for this release include Count Bass D (“Penmanship”), Greg Nice (“Come On”) and the binary system of Supa Dave West and Willie Evans Jr. (“Ours”). The brightest shine though is the opportunities for “Bats and Dilly” to showcase what they can do when left to their own devices – the production devices and the mic devices respectively. That’s why even soft and gentle tracks like “Beautiful Mistakes” have a luminous glow that’s hard to ignore. The words are thoughtfully chosen and well arranged to a beat that just feels RIGHT.

“One door is opened as another is slammed shut
Try to get your foot in either anyway you can, but
when the opportunity knocked, you got so damn stuck
that you would rather be in the cut and not even stand up
(Stand up!) And that’s a damn shame but I can’t blame ya
I mean you can’t blame me – that’s what this land made me
Smokin contemplatin, foldin this poker hand maybe
Once upon a time it was all according to plan baby!”

The biggest WHY of all that I have to push out there is “Why are Dillon and Batsauce not better known in our rap galaxy?” I suspect there’s some natural skepticism out there. If I’m being fair (and I mean no offense because dude is dope as hell) Batsauce sounds like a comedy name instead of somebody to be given the highest regard. It sounds like a one off spinoff comic where Batman and applesauce somehow merged and became a crime fighting mutant. Dillon? Yeah people are going to think you’re smoking something when you say “Dillon is the nicest emcee.” Dillon who? What’s his last name? (It’s Maurer actually.) I mean he could call himself MC The Most Nicest or Lil’ Dillon or Young Dillon Esquire but even if that would pop his name in the mainstream he knows it would be corny and so do I. The truth is that “On Their Way” answers an even more important question than WHY and that’s WHERE. Where are Dillon & Batsauce going? Into the MP3 players, CD drives and turntables of those who appreciate the good s–t.