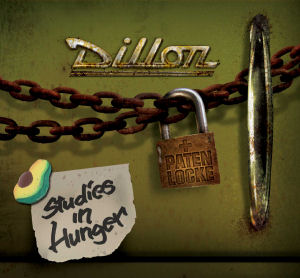 Last time around, Atlanta resident Dillon served up a “Southern Scramble” mixtape to feed those hungry for rap with underground grit and a little bit more heat. He was on the right track but with limited distribution not many people got to savor the flavor, but as luck would have it his skills in the kitchen got him noticed by people in higher places. EnterDomination Records – perennially hungry for dope hip-hop and looking to showcase the best chefs in the underground. Dillon didn’t necessarily need a partner to help him cook, but I don’t think it hurts him to find a likeminded heat seeker looking to blow up the spot with food that’s hot. Enter Paten Locke. What do you get when all of these forces collide? A new cookbook called “Studies In Hunger”:

“I thought I told ya I’m a hot mess
I got, gotta get over and accomplish, God bless
my folks cause they always said (HEY)
Get yours but do it your way, and I’m learnin
I lucked out, and linked up with Uncle Herman
There’s somethin burnin, cause it’s hot hot, now hear me now
Born in Michigan then made it to Florida
Graduated and drove North to Georgia
And I’m still tryin to find more direction
Yo can I get a little help from the horn section?”

Dillon may think he’s a “Hot Mess” but he has the essential elements in his recipe to succeed – he’s talented without being egocentric and hungry while still humble. Rather than taking away from the flavor that Dillon has already displayed to date, Paten Locke adds spice that only enhances his natural taste and makes it even more vivrant. Once you hear it their natural skills is not hard to “Identify”:

Dillon: “To my friends and compadres, most of y’all been there
It wasn’t my plan if y’all had vanished into thin air
from the drugs or, maybe they got wifed up
to hide behind a 9 to 5 complainin that they life sucks
I identify the war scenarios that shifted
You ain’t doin right it’s like you barely know the difference
And we all spend time thinkin of each other often
You ain’t show me love enough to call then – listen
When I ask you to come to shows, you actin uncomfortable
Bust it though – I’m all about friendship
Uh-huh, salute me then, to the ones who me ends
and pretend that they – all about friendship
No, they fraudulent”

Paten Locke: “Damn Pat, where your peeps was at when you got your ass kicked?
Most the folks you know is slick, need to get the axe quick
Associates you’re smokin with, slow up on the pass tip
but that’s the kins cause y’all rap a bit? Man this average is
a fraction shows your inner actions with like, most of you
Passionate, unapproachable, dead serious
It’s all a joke to you, all cute – that’s hilarious!
Brother I remain a mystery like the pyramids”

While Paten Locke gets his shine on here and there, it’s still Dillon who plays the starring role and deservedly so. If Dillon is the Iron Chef, Paten Locke a/k/a The Black Therapy is the sous-chef making sure his flavors come out just right, producing and providing all the elements to make it work. While P could clearly play the star role on his own time, you can tell by the repeated (but not obnoxious) shoutouts Dillon throws to Therapy that the duo really do compliment each other musically without any jealousy to who gets the spotlight. That natural chemistry comes through on “Concentrate,” a chill out song that rocks xylophone, turntable and a slow naturally paced drum measured out perfectly – a recipe for success:

“Pardon the interruption
From Atlanta, via Florida, in the function
To motivate, though progress is often so slow to make
Control the rate baby, you can make it, keep your shoulders straight
Focusin, doin music and not bein broke again
That’s the reason me and Therapy’ll keep you open in
the physical, while lack of concentration could be critical
Now that’s a thought the aftershock is patient and hospitable
Cause people grow, at they own pace
I’m hopin that you in it, for the long run finish, the whole race”

I’m hopin that Dillon is too. By coming back arm in arm with Paten Locke, he’s not only coming back stronger, he’s coming back with even more flavor than he showed on the “Southern Scramble.” This isn’t just a better breakfast, it’s a whole new dinner. And there are plenty of people sitting at the table with them – Akrobatik, Cool Calm Pete, H2O and Stacy Epps among others. If you don’t know Dillon already you may want to look for a mixtape first before you order from the menu, but you can take my word for it that this album is consistently fresh cooking from the start to the finish.