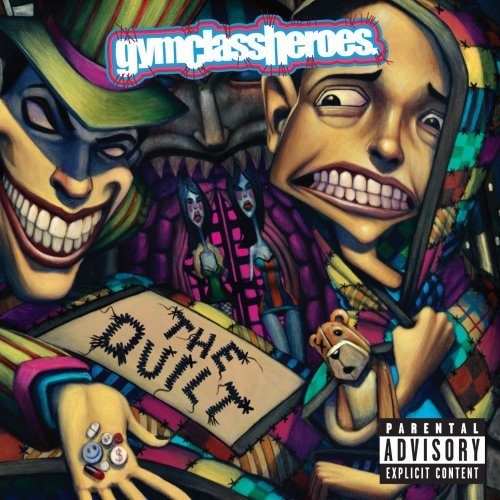 Gym Class Heroes are a surprisingly divisive group when it comes to rap purists. The critics have accused their live band bop of straying too far from pure hip-hop, and yet having seen them perform in person I can’t help but disagree. While it’s true they may be best known for the crossover success of “Cupid’s Chokehold” (you’ve undoubtedly heard Travis McCoy crooning to take a look at his girlfriend a million times), that’s hardly the beginning or end of their repertoire. My favorite song from the same album that spawned that hit was “Pillmatic,” a hypnotic hip-hop ode to pharmaceutical woes where McCoy brazenly declared “Catch me in The Source with five pills next to my name/Like FUCK five mics, I want five Vic’.” That’s the shit that hooks me on GHC and why I feel they deserve their mainstream success. Even though comparing them to The Roots is cliche, it’s still apt given that the live band is only as good as their frontman, and while Travis McCoy is no Black Thought he shouldn’t be taken for a joke either. He’s serious about his raps and as it turns out he’s really not half bad as a singer either.

“Slam the gavel, Judge Judy got a gruuuudge
Still dealin me for days on end and I won’t buuuuudge
I’m on some Eddie Murphy ‘Raw’ baby it wasn’t me shit
Wrong place, wrong time, I was there but I didn’t see shit
Now you can throw the book at me and I’ma throw it right back
Slap the district attorney and ask him how you like dat!”

Thankfully “Peace Sign/Index Down” should be all the proof 12 good gitizens will need. Proven hitmakers Cool & Dre lay down a hard piano banger while McCoy and guest rapper Busta Rhymes tag team hyperactive verses to prove their point about being superior entertainers.

McCoy: “I started rappin, back of the class, scribblin tracks
In hopes that one of my jokes would have the pretty young things..
laughin, the chubby little bastard with a nack for Little Debbie snacks
But what I lacked in looks, I made up for it in passion
No advance, and plus we make it happen
In your conscience more obnoxious then that Laffy Taffy snappin
Goodbye yesterday’s rags, hello high fashion
Hands before youse a man that built a castle with sand
With no regards for tidal waves and finally established
’til the water comes in gallon drums and wipes away my palace
But now I’m sittin lovely off in Wonderland with Alice
With purple people passin me at the Caterpillar’s chalice”

Busta: “Bust it! Before I utter words and before I start to begin
Let me make sure you clear I’m about securin the win
I puzzle up my words while I piece another concoction
Cause I’m stubborn with the thought that failure was never an option
I grinds like a carpenter ’til my callouses bleed
With the passion from my heart to the many mouths that I feed
That’s why I look at most of you stupid I know it’s odd
Because you can’t really do nuttin to me unless you GOD!!“

There are no shortage of dope songs on “The Quilt” to nod your head to lyrically and tap your feet to musically. “Blinded by the Sun” rocks a ska vibe that even No Doubt would have to admit is funky fat shit. “Cookie Jar” featuring The-Dream takes that T-Pain style R&B vibe and thankfully does it WITHOUT using AutoTune. The slow flow McCoy employs to talk about his addiction to sexual “Scooby snacks” sets just the right mood. The pianos that open “Don’t Tell Me It’s Over” sound like they could come from the score of a Rocky movie, which is a perfect match for McCoy’s defiant rap declaring that “oh-eight is gonna be great, imagine 2011!” Not all of the songs are in easy to digest radio play lengths either, as “Live Forever (Fly With Me)” proves they aren’t afraid to do a song that’s over seven minutes long. The more that GHC take chances on this album, the more they succeed.

Honestly I understand why people are skeptical of the Gym Class Heroes. It seems just a little too convenient that they toiled in obscurity, got discovered by pop rock band Fall Out Boy, and suddenly rocketed to heights of fame and popularity even they must have had a hard time imagining. Even if you argue they got the lucky break a hundred other struggly rap acts deserve and never will, it’s just plain Haterade to say that they’re no good as hip-hop artists because they rock a live band steelo. In 2008 it’s hard to argue with the value of playing live given the cost of everything skyrocketing, INCLUDING sample clearance, so if you’re good at it why the hell not do it! Thankfully GHC are so you can file “The Quilt” right next to your collection of Roots classics – this is a band you SHOULD be looking out for both today and in 2011.