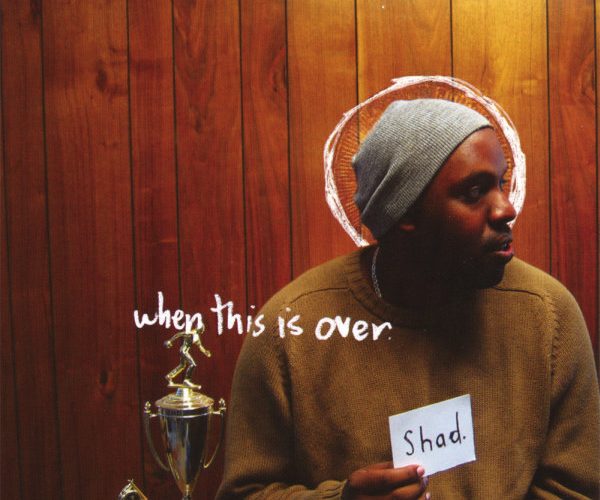 Shad :: When This Is Over

You could call that a quotable, but I literally could’ve quoted any selection from Shad’s “When This Is Over” and it’d be nearly if not equally remarkable. If nothing else, Shad can write. Fortunately, there is a LOT else.

Literally independently distributed, Shad funded his debut album with the $17,500 he won in an unsigned talent contest. Unsurprising, because he’s extremely versatile, switching between braggadocio and introspective with careful precision and even playing guitar on two cuts (and I mean PLAYING guitar, no Lil Wayne). Shad achieved all of the above while still at university, but from his honest self-deprecation to his strong religious views, he’s closer to Kanye West than Asher Roth.

“New School Leaders” is more or less the blueprint of the album, featuring Shad in self-conversation, doubting his abilities and then reassuring himself. It includes both his razor sharp wordplay, along with his sincere charisma:

“[Yo, tell me exactly how you got your props]
One day I started workin’ hard and just forgot to stop
If you don’t stay on ya grind you’ll probably rock the spot
Around the time pigs fly, like some cops with hops
…
But you gotta have confidence [What about humilty?]
Well I’m not sayin’ be pompous kid, just recognize your ability
‘Cause a real emcee knows if he’s competent, you feelin’ me?
[Well are you feelin’ me like do I got what it takes?]
Well do you got a vision, a purpose, a mic and some breaks?
I know you got the passion ’cause I can see it in your face
And that’s already more than half of these cats that’s makin’ tapes”

Make no mistake about it; Shad’s casually delivered punchlines are better than those of damn near any mixtape rapper forcing wordplay over “Ambitionz Az a Ridah.” Still, the most outstanding tracks on “When This Is Over” are those that conceptually and personally reach beyond what other emcees are doing. The final and longest cut on the album, “A Story No One Told,” is easily one of the most hauntingly intimate hip hop songs I’ve heard. A story about nothing more than life, Shad drops meditations you’d expect to find in a Khalil Gibran poem. More impressive is the effectiveness of the live production, slowly creating the perfect atmosphere for the subject matter. I won’t spoil any of it for you.

One can’t go without mentioning “I’ll Never Understand,” an absolutely moving reflection on Shad’s mother, Bernadette Kabango’s, bloody past. Born in Rwanda, Bernadette lost her father, brother and sister to the 1994 genocide. She reads her poem on attempting to forgive those who killed her family, while Shad contemplates the reasons why this happenedâ€”and it still happening.

Despite its incredible peaks, “When This Is Over” is not quite perfect. The NBA-themed “Real Game” is hilarious but lacks the replay value of the rest of the album, while “Question Marks'” production isn’t nearly as intriguing as its subject matter warrants. Still, the album is a triumph and an excellent prelude to his even better sophomore release, “The Old Prince.”