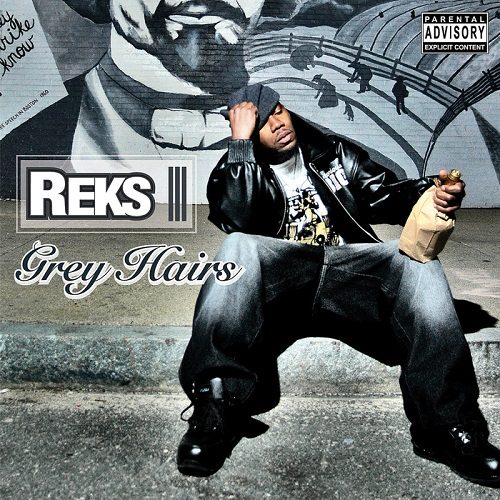 Any album with a beat by DJ Premier is worth a listen in my book. Couple that with production from fellow luminary Large Professor and new school leaders like Statik Selektah, Soul Theory, and DC The Midi Alien, and you’re primed and ready for a top shelf musical experience, assuming the ball isn’t dropped on the lyrical level.

With Lawtown native Reks on the mic, that’s a fair assumption, as the Massachusetts veteran uses his evident experience to create an impressive album that contains some individual gems but works best as a whole product. It’s rare that a 20 track album can grab and maintain your attention from top to bottom, but “Grey Hairs” does just that with contributions from artists who are comfortable and confident in their craft. Everything just sounds at home on the album, from the mildly nostalgic yet totally relevant production to the reflective lyrical tone. The consistency perhaps shouldn’t be surprising, with more than half the album produced by Statik Selektah, but the way beats and rhymes mesh on this one is truly a sight to behold.

If you’re not familiar with him from his debut “Along Came the Chosen” from 2001, you might find Reks to be an almost unassuming presence on the mic. His voice is almost too smooth, his flow too easy to convey the righteous anger these beats require. But a second look will reveal that his lyrics have enough bite to carry his message even without the guttural inflections of an Xzibit or the fiery delivery of an M.O.P. In fact, the quality of his sixteens will take you by surprise as his recitation of them is so effortless that you often catch yourself just absorbing them as part of the musical backdrop. On second and third listen, however, his searing compositions become obvious and his lyrical craftsmanship is on full display. This is an MC who takes his job seriously, and he’s quite good at it, even if his fluidity occasionally obscures his obvious talent.

His partnership with fellow Massachusetts native Statik Selektah forms the backbone of the album, but the other producers who contribute match the existing vibe so well that you might have a hard time keeping track of which songs AREN’T produced by Statik. The chipmunk soul of “How Can It Be” allows Reks to narrate some of his journey and ruminate on his role in East Coast rap. Soul Theory’s dreary soul sample on “Money On The Ave” provides the perfect backdrop for Reks and Skyzoo to illustrate how they opted to take a different route than the one so prominently on display in their neighborhoods growing up. Blaze P supplies a rollicking flurry of horns and electric guitars on “All In One (5 Mics)” over which Reks salutes rap’s fallen by offering up surprisingly accurate impersonations of Tupac, Biggie, Big Pun, and Big L, with M.O.P.’s Lil Fame acting as hype man. Tupac is easy enough, especially when you throw in all his favorite lyrics (rhyming “enemies” with “Hennessey,” quoting numerous song titles); Biggie is more of a stretch, especially with such a drastically different vocal tone, but he pulls off his trademark flow ably; his Big L effort is solid as well but nothing spectacular; but his impression of Big Pun is truly jaw dropping. He captures his voice, flow, rhyme pattern, the whole shebang. If you weren’t already convinced that Reks had lyrical chops, this track should do it for you.

If that weren’t enough, Reks touches on a variety of subjects throughout the album, mixing social commentary with braggadocio and reflections on hip hop music and culture, and none of it sounds forced. He performs admirably over what sounds like a B-level contribution from DJ Premier â€“ which is still better than most everything else out there, mind you â€“ and he flows beautifully over Large Professor’s startlingly brilliant “Stages,” never deviating from the mood he has set with his main musical partner Statik Selektah. Even with all the impressive names on the production credits, Reks steals the show, eventually outperforming them all and making the album his own. After multiple listens, what sticks with you is Reks â€“ his personality, his stance, but mostly his lyrical dexterity â€“ and the beats end up being carried by him. It’s an astonishingly sharp effort and a testament to the continued vibrancy of hip hop amidst all the hand-wringing over the music’s supposed descent. This is one to be enjoyed in its entirety, “Grey Hairs” and all.