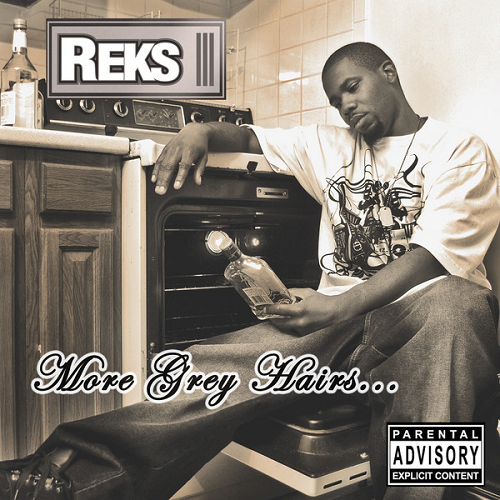 Diehard Angeleno that I am, it takes a lot for me to give Boston its props, but sometimes you must do the unthinkable. Admittedly, it hurts a lot less with an NBA Championship in my back pocket, but showering praise on Beantown is always difficult, no matter the circumstances. So take that into consideration when I say that the Massachusetts scene is currently producing some of my favorite hip hop, almost on a par with Detroit Rock City, and Reks is among the area’s brightest stars.

His career has been somewhat stop-and-go, with a seven-year gap between his first and second albums, but he’s picking up steam and dropping his second album in as many years to follow up on the success of 2008’s “Grey Hairs.” As with that release, Statik Selektah has a significant presence on the “Grey Hairs” redux, but with production on just five of twelve tracks it is considerably diluted this time around. And unlike last time, the producers chosen to fill in the gaps are not of the same legendary caliber. There is a DJ Premier contribution again â€“ the undeniable standout “Cloud 9,” which far outshines its predecessor in every way â€“ but other than that, the names involved are much lower-key and turn in mixed results. The Soul Searchers nimbly rework Jay-Z’s “My 1st Song” on “Bitter” for Reks to wax eloquent on some Obama-related issues. DJ GI Joe’s hard-hitting snares fare similarly well on “System,” as do J. Creed’s minor-key bells on “I Ain’t Shit.” Others, however, fail to hit on all cylinders. The “Money On The Ave” remix by Soul Theory is neither necessary nor particularly inspired, although the added cameo from Termanology makes it a worthwhile listen. “Goodnight And Goodluck” is the only true stinker of the bunch, and it’s made worse by the fact that its name had me anticipating some kind of riveting story rap rather than a tepid love track over equally tepid production.

If it sounds like I’m bitter as those guns-and-religion-clingers, it’s only because Reks set the bar so high with his last release that I went in expecting damn near perfection and felt betrayed at every misstep. Luckily, there weren’t very many of them, and with Statik Selektah holding down almost half the beats and R-E-K-S on the mic, the baseline quality on “More Grey Hairs” is still pretty darn high. Reks gets about as playful as he ever does on “Play My Music,” begging the radio to take pity on him and give him a few spins. “Stereotypes” is a clever tongue-in-cheek play on the stock cultural figures we fall back on, with Reks urging, “White folks off beat to this / All my blacks lose a job to this,” on the hook. Even better is “Killaz On Wax,” where Reks takes a second to pull the cards of all the gangster- first-rapper-second MCs out there. His chorus is worth quoting in full:

“Growing up with instincts to click-clack
You at award shows, where you put the fifth at?
I know you gotta keep your sales in tact, but one question
Why all killers gotta rap?”

Statik’s swanky horns and gunclap sound effects set things off just right and make this one a must-hear. The same goes for the heavily swung synth organs and precise flow of “Year of the Showoff” and soul and keys combo of “Dear Winter,” both of which hit hard at a relatively short three minutes apiece.

If you can get your hands on them, there are a couple of bonus tracks to be found as well, both of which are worth tracking down. “Light of Mine” is a little heavy on the â€˜80s vibe for my tastes, but Reks’ lyrics and charisma save the track as usual. “Til Ya Hair Turns Grey” is a different story entirely, with the obvious Snoop Dogg sample looped for the chorus and a deceptively simple concoction of nagging strings and persistent hi-hats providing Reks with an ideal backdrop to dedicate himself to hip hop over the 9-to-5 drudgery on display around him. It’s not the most brilliant lyrical display you’ll ever hear from him, but it’s a song that just works on so many levels that it’s best not to question it.

If the rest of the album had this same kind of chemistry, there would be little to complain about. This isn’t the case, however, and the back story about these being the cast-off tracks from the original “Grey Hairs” recording sessions makes clear the standing of these songs as second-rate in the Reks catalogue. Reks at half-speed is still a pretty terrifying thought, though, and for his lyrical performance alone you should give this one a chance. It’s just a shame the whole album didn’t gel as well the second time around. I’m eagerly awaiting the next, completely NEW project from Lawtown’s finest, but “More Grey Hairs” will hold me over nicely until then.