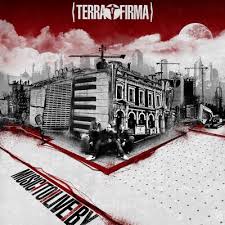 Terra Firma :: Music to Live By

Allow me to first make one thing clear to readers: Terra Firma are an Austrailian hip hop act. They have rather thick Aussie accents and if the drawl of British MCs such as Klashnekoff turns you offâ€¦you’ll likely not get past Track 2 of “Music to Live By”.

I myself can’t claim to regard these foreign accents as easy listening either; I find Sway and The Streets tolerable, but doubtlessly held back by their sound. In the case of “Music to Live By,” producer Simplex more than salvages a long album of discomforting flows with his penchant for mixing live instrument production and DJ Dyems’ cuts.

Indeed, the album is aptly titled, as its most rewarding moments are often those removed from its rappers’ lyrics. The title track’s sax-guitar combo smoothly morphs into one of the album’s best hooks. Female vocalist Carla booms “When I was a child, I seen music to live by // Now that I am grown, I see music to die for.” KRS-One samples are then sprinkled about a tight bass line, and although the raps on this record are some of the best, it’s still most interesting when Simplex and Dyems are left alone.

“One Track Mind” has Simplex at his most creative, trading in snare and kick drums for horns and a triangle. For real, it’s definitely a triangle. Simplex also keeps the rhymes to himself, using the obvious metaphor of a train relating to a one-track mind. Later, Simplex flawlessly mixes in the Pharcyde’s “Runnin” into his production on “Trouble,” and channels the flutes of Hubert Laws on the melancholy “Sideways.”

Returning to the lyricism, the album’s best verse is inarguably a guest spot from none other than the Bronx’s own Percee P, whose appearance on “Hall of Fame” is head-scratching and never really explained. Don’t ask why or how he’s affiliated with Terra Firma, just appreciate his reliably monstrous bars:

“From a fast paced mass wasteland where they blast, chase
Last case they found in the trash, face down get yo ass laced
Feds hire acts wit wiretaps ’cause I inspire cats to bring bias back
Who admire that grace papaya rap
I work hard for dollars later, my style is greater so I tolerate
A lot of haters’ chicks get bagged like alligators
..Perce is deep, work to eat, lurk the streets
Grind rhymes hard to beat like under skirts of freaks
Fuck all that chit chat, I ain’t wit that at grippin’ click clack
And spit fat shit that blow ya wig back that’s how I rip cats”

The subject matter on “Music to Live By” ranges from clichÃ© inspirational records (“Now’s the time, to move from the old, start livin’ the new // To find, warmth from the cold and share it with my crew”) to the token cipher to a muddled stab at a party jam. Unfortunately, disregarding their accents, Terra Firma struggle to pen choruses with any original content. “Looking Back” echoes the shallow “It used to be easy, now it’s not // I’m feelin’ that this world has gotta stop.” Perhaps clever in theory, they also come up short at a reinvention of hip hop’s most famous foreigner on “We Like to Party,” borrowing Ricky D’s “La Di Da Di” hook to awkward results.

Topping out at over seventy minutes, even Simplex’s usually appealing production can’t stand up through the length of the album. “Recordlection” is a five-minute mix of classic hip hop lines, with no real purpose, unless you happened to forget that Ghostface Killah and Digital Underground are dope. “Wise Guys” marks the album’s greatest offense; an eight-minute posse cut featuring fourteen other Australian rappers, of only slightly varying range in talent level.

“Music to Live By” is good background music at its highest points and a headache at its lowest, but is worth noting as a palette for Simplex’s blossoming skills and an expectedly great verse from Percee P.