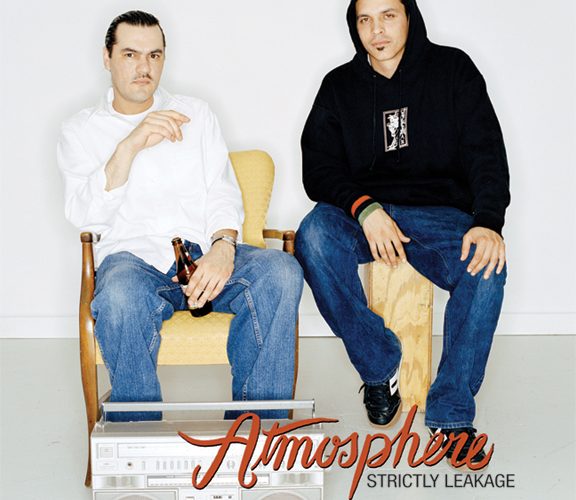 2008 is the year I got on board with Minneapolis duo Atmosphere. I was finally won over by “Guarantees,” which I heard as part of Minnesota Public Radio’s “Current Song of the Day” podcast. That track features MC Slug rapping over a lonely blues riff, and telling an all-too familiar story of a lower-middle class father struggling to stay afloat. It struck me that what Atomsphere are doing has less to do with emo’s self-pitying and self-indulgence, and more to do with Bruce Springsteen’s sympathetic tales of blue-collar anxiety.

This year’s “When Life Gives You Lemons, You Paint That Shit Gold” was a change for Atmosphere. Slug moved out of the limelight, acting as an observer rather than protagonist for his rhymes, and rapping less about his own personal issues and focusing more on the struggles of a series of characters. Producer Ant also moved away from the funk and soul breaks that marked his earlier work, and used a larger and more muted sound palette which incorporated the backing band that Atmosphere has been touring with. “Strictly Leakage,” released as a free download at the end of 2007, is a contrast to “When Life Gives You Lemons,” giving Slug an opportunity to lighten up, and Ant the chance to dust off his sampler.

“Strictly Leakage” has gotten heavy rotation in my ipod for the past four months for two reasons: the beats and the rhymes. First, let’s look at the beats. As much as I love the instrumentation on “Lemons,” I will always, always be a sucker for the old-school breaks that make up “Leakage.” I’m not enough of a trainspotter to know where the samples are taken from, or what other tracks they’ve appeared on, but I do know that the thirteen tracks Ant offers up here are pure, unadulterated hip hop, just like they used to do back in the day. The beats may not move hip hop in any new directions, but they’ll sound good on your boom box. Even if Soulja Boy was rocking verses, it would still be worth listening to.

Of course, Slug is no Soulja Boy (or rather, Soulja Boy is no Slug). Slug is both remarkably insightful and incredibly clever, two qualities that make him one of the better MCs in the game. His tendency to talk about his feelings has unfairly earned him the emo-rap tag, but he has a novelist’s ability to describe characters and capture a scene. He is also a much more sympathetic and humble person than a lot of MC’s, always aware of his own flaws and shortcomings. His rhymes provide a welcome release from the posturing and affected swagger of the typical mainstream rapper.

On “We Love The Things That Hate Us” Ant offers up a banging beat and Slug offers up his observations on the current state of the union, in all of its unhealthy, desperate glory. The track is the perfect combination of head-nodding hip hop and cathartic release, giving the listener a chance to celebrate how fucked up things are:

“Strip clubs gun shops oh Jesus right next to the liquor store for your convenience
Everybody say ho for the cuervo
You can drive if you promise to be careful
Turn the radio up and light a doobie
And keep acting like life is like a movie
This is for those needles you share because
Those after school TV specials is too square
Cook the coke for your own consumption
All on some Joe Joe Dancer, old school
What’s your function
As American as herpes and hot dogs
Got lost between the mustard and the hot sauce
Unprotected sex with that one you just met
You ain’t even got all your hep shots yet
We love the things that hate us
Push snooze again girl I don’t want to wake up
America the beautiful that’s how she played us
Wasn’t that cute it must have been her make up”

Those who feel that “Lemons” is too serious will appreciate the humor on “Leakage,” including a song about picking up women in supermarkets, and the dis track “That’s Not Beef, That’s Pork,” which calls out shitty rappers who are “Sad and funny/like an overweight ballerina.” “You Played Yourself” clowns drunken haters, shitty opening bands, and groupies, with lines like “You ain’t gotta flash me your ass and tits/I’d rather fantasize that you’re a rap advocate.” Slug has a wicked tongue, but he’s not totally vicious. Even when he’s schooling fools, he isn’t a dick.

The album is rounded out by “Road To Riches,” which celebrates Slug’s history with music, “Full Moon,” a straight up party track, a posse cut featuring some of the Rhymesayers crew, and a minute-long blast about poker. He also defends the place in hip hop for the suburban and melanin-challenged place in “Little Math You.” Few rappers would dare acknowledge this increasingly large but much-disdained sector of hip hop, much less admit that they have a place at the table:

“Little Matthew from the burbs got to hear it
It’s like the only thing that puts the nerve in his spirit
Go ahead and make some rukus for the hell of it
and yell it on the streets of that monotonous development
You telling me that this ain’t for him right
How many ya’ll mother fuckers get an invite
[…]
Love is love, if that’s what you give
I could give a fuck where you grew up or where you live”

For the most part, the party rap on “Leakage” works, and it is a pleasure to hear these two veterans just have fun with it. The sessions for “Lemons” must have been intense, and “Leakage” clearly offered the duo a release. That said, as good as “Leakage” is, it would be a bit of a disappointment if Atmosphere hadn’t released “Lemons” a few months later. They aren’t pushing themselves here, and they have too much talent and potential to revert to old-school jams and shit-talking. “Strictly Leakage” is best enjoyed as a companion piece to “Lemons,” a reminder of Atmosphere’s lighter side, and comic relief to the somewhat somber and depressing songs on “Lemons.”