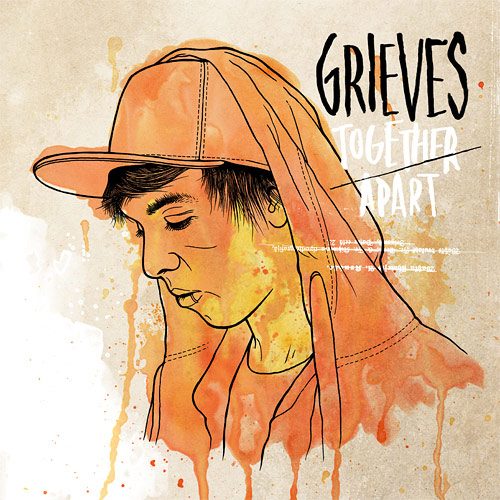 Grant JonesFebruary 26, 2013
Back to the LabReview

Rhymesayers have always struck me as a label that could market an artist towards the current trend in hip hop. The last few years have introduced the public to Lupe Fiasco, Kid Cudi, Gym Class Heroes, Asher Roth, Tinie Tempah and Macklemore, all MCs that transcend the guns and bitches stereotype rappers are often slung with, in favour of a friendly, almost geek-like appearance. As I’m in stereotype-mode, let’s say Rhymesayers is the home of backpack rap, with a roster packing Slug and Aesop Rock, that’s undeniable. I’d always bypassed Rhymesayers off as quirky art-rap that wasn’t easy on the ear, but when Evidence joined the ranks in 2009, I’ll admit now, I’ve been following each release with fervour. One such artist that piqued my interest was Grieves, a rapper that ticks all the boxes as far as chart material goes; skinny, white, can sing and has a friendly demeanour. “Lightspeed” was my first experience of Grieves and it sucked me in with that old chestnut – nostalgia. There has been a million “back in the day” songs, but accompanied with a professional looking video “Lightspeed” is a mellow take on not only how simple life used to be, but how fast life goes by:

“Tragic” is Grieves in full flow. Accompanied by a fine impression of Lil Wayne on the hook alongside the excellent Brother Ali (who delivers a pitch-perfect verse), musically things don’t get simpler. “Pressure Cracks” plods along nicely and is probably the most accessible song on the album. The ratio of singing to rapping is pretty equal, and the end of the track switches up to include what can only be described as “wannabe dubstep”. It lacks on content but undoubtedly fits in nicely before “No Matter What” delivers a more convincing display of hip hop, coupled with a Budo-produced piano pounder. Utilising a catchy-as-fuck MIDI-infused backdrop, “Vice Grip” sees Grieves bemoaning the fact women push him towards drugs in between a brilliant hook that you won’t get out of your head for days. “Growing Pain” is one of the few times Grieves shows anger, rhyming about the confliction between regret and maturing in to something better. Budo shares production with Grieves, who together craft a satisfyingly energetic beat with “Wild Thing”. As good as the production is, Grieves stands out:

“You should have seen it before you jumped on in
And realised that if you look before you eat, you decide to sink or swim
But you dove in to that social pool, powderin’ your nose
And goin’ home with people that you hardly even know and
You’re a ghost, now look at you, you hardly even speak
Haven’t woken up to the thought of gettin’ clean in fuckin’ weeks
And if you did, I’d guaranteed you’d never leave the sheets
Home alone until that fix comes, put you on your feet and
Some blame it on the city, some blame it on the streets
Some bury it inside beneath that dream of being free
But I can see it in your eyes, you’re aware of what it needs
How you feel like it’s the only thing in love that doesn’t leave
â€˜Cause I remember life without the games
And the bittersweet acknowledgement of how it’s gonna change
But the rain can’t wash you if you’re layin’ in the dirt
And the pain can’t change you if you blame it on the hurt”

“Against The Bottom” is a superb example of Grieves’ brand of prolonged song-rap with poignant rhymes. Musically it is the most traditional affair, combining kicks and snares with Grieves applying his most tight-knit flow. The whole vibe evokes happiness yet lyrically Grieves delivers a bluntly downtrodden verse:

“I should have seen it when you broke down, stop and listen
And stop acting like you don’t have a position
I could see it from the jump when i kissed you
I’m feeling it through the walls that you’re constantly putting your fist through
You’re pissed, but you ain’t got to fight like this
Life isn’t worth a dime with a knife-sliced wrist”

It’s hard to hear whether Grieves has made use of Autotune, but even if he has, this reviewer’s battered eardrums can’t trace it. He is a worthy emcee, and although he can’t sing like Mariah Carey, he doesn’t need to. “Together/Apart” comes across so effortless that the result is a naturally cohesive album from a rapper unafraid of sharing his deepest emotions. For some it may be a bit soppy, a bit clean-cut and the constant crooning becomes intrusive on “Bloody Poetry”, but that is me mostly nit-picking. Grieves and Budo have crafted a magnificent record that combines believable emotion with stellar production and showcases two talented artists who have great things to come, together or apart.