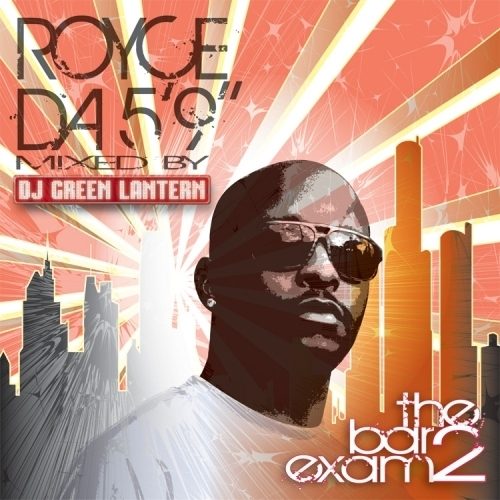 Here we are, a year after the first installment of the “Bar Exam” series, and still no official album from Royce. This wasn’t supposed to be the case, but with interminable delays of “The Revival” we are left once again eagerly awaiting a mixtape rather than a true new release from a favorite artist. Tell me that scenario doesn’t sound familiar.

Fortunately, in Royce’s case a mixtape is still a darn good thing to look forward to, if the first “Bar Exam” is anything to judge by. If you’ll recall, it was mixed by Statik Selektah and hosted by DJ Premier, and it featured Royce rapping over a number of classic Preemo tracks, and quite impressively, I might add. This time, Royce has ditched the focus on reinterpreting classic material, choosing instead to rhyme over familiar but less iconic selections. This doesn’t hurt the quality of the music, though, as Royce is able to make these newer beats his own, much more than was the case when he used all the hip hop standards. Sure, everyone knows Lil’ Wayne’s performance on “Let the Beat Build,” but it doesn’t have the weight of history attached to it, which allows Royce to really go all out on these tracks.

First things first: this is a shit-talking, enemy-baiting, chest-beating romp of a mixtape, with little variety to speak of in terms of content. There is none of the personal depth he demonstrated on the acclaimed “Death Is Certain,” and that album’s dark, brooding mood is only carried over inasmuch as his fierce forays on the mic convey a sense of nihilistic rage against any who would dare test his patience. The closest you’ll get to personal reflection on “Bar Exam 2” are the multiple allusions to his rampant alcoholism, hinting that he either parties hardy or is still in the grips of some larger existential crisis. Either way, Royce, please put the drink down occasionally. We need you around.

DJ Green Lantern is the man behind the mix this time, and this adds the usual sheen of good production value and thoughtful layout of the songs, both of which put his mixtapes a cut above the competition. The beat selection generally succeeds as well, but that’s not the reason to tune in here. Nickel Nine on the mic is the main attraction, and deservedly so. He raps like a man possessed, occasionally rhyming fast, occasionally rhyming slow, but always tearing the track to shreds. While the subject matter isn’t that diverse, his lyrical skills range all over the map and succeed on all fronts. He’s got every trick: witty punchlines, intricate rhyme schemes, and a brash swagger that makes even the most ostentatious boasts seem plausible. Royce has always had a viciousness to his delivery, but here he attains Tupac levels of vitriol, sounding like the confines of the audio track can barely contain his rage.

While there is plenty of venom to go around, most of it is directed rather generically at “you,” that amorphous group that includes haters, inferior rappers, shitty industry politics, and anyone else who refuses to recognize Royce’s greatness. There are, however, a few individuals who directly catch his wrath. Mistah F.A.B. gets a snide reference or two, although this match-up has already been thoroughly deaded by Royce’s diss track “Who Got Bodied,” which approached “Hit ‘Em Up” for sheer ferocity. There has also been beef brewing on the low between Royce and Joe Budden, with a line by both here and a line there, and Royce notes of his Jersey City rival, “Listen to Joe Budden say I fell the fuck off / But he ain’t never fell on, I’m just gon’ ignore him.” This is on “I’m Nice,” which recycles the beat from “My Life” by The Game and Lil’ Wayne, which brings us to the next quasi-rivalry on display. Without ever directly dissing the dreadlocked one, Royce does give the impression of having an axe to grind with Lil’ Wayne, rapping over a number of his beats and throwing plenty of subliminals in his direction. In addition to “I’m Nice,” he uses the beats from “Let the Beat Build” (same title) and “You Ain’t Got Nuthin” (“Gettin’ Money Freestyle”) off “Tha Carter III,” and he declares, “Fuck this AutoTune shit” and “As far as tears, my face ain’t big enough to relate how many bodies gone in the form of a tattoo” on the latter song.

Even with the sideways disses and potential battles, substance is not what this mixtape is about. It’s about style, and Royce has it in abundance. He drops absurd, over the top threats left and right, at one point claiming, “My release date is more important to the country than tuning in to your news stations November 4th,” which is shortly followed by his claims to be like “Dahmer â€“ pop you then eat you on the anniversary of your death like the top of a wedding cake.” When the beats bang as they do here, Royce’s vocal flair and lyrical daggers are enough to make any mixtape worth a listen. This is as good a stopgap between albums as you could hope for.