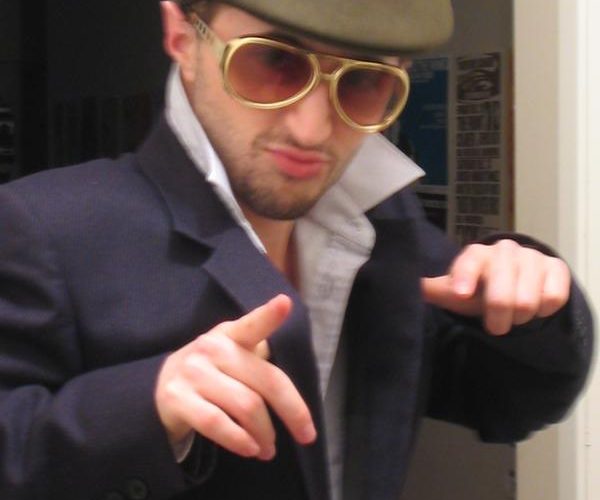 Josh Martinez just did RapReviews a huge favor. Not only did he provide us with one of the most entertaining interviews in the history of the site, but by mentioning underage girls, dry humping, STDs, handjobs, doggystyle, barebacking, virginity, whorehouse, boner, moustache rides and tattoos he has undoubtedly launched us to new heights in the results of lot of very interesting Google searches. If you’re one of those people who were expecting, ahem, something other than an interview when you clicked on this link, stick around, you’ll want to read up on one of Hip-Hop’s most entertaining characters (clearly you have similar interests, right?). Just last month Martinez released his latest album, The Sex Buffet, and after ten years of nonstop touring this self-proclaimed “Lifestyle Enthusiast” has plenty to say.

Adam Bernard: Start everyone off with a little bit of background info. Who is Josh Martinez and what makes him one of the most interesting people in the universe?
Josh Martinez: Josh Martinez got his start in the trenches of the underground rap scene in 1996 working out of the legendary burg of Halifax, NS, home to Buck 65, Sixtoo, The Goods, Moves, Skratch Bastid and Classified. Having caught the attention of Ninja Tune and Anticon, Martinez set off to make history for his little town and began what has been the longest tour of his life. It has lasted over ten years and has taken Martinez to so many places that it hurts just to think about it. Moving away from the indie rap scene when it started to die a little death, Martinez moved more into songwriting and live instrumentation to make sure he kept up with the Joneses. Martinez has also referred to himself entirely in the third person thus far and will stop now. I guess I’ve managed to carve a unique role for myself in music by melding and borrowing, i.e. stealing, from all genres and using harmony and singing a lot to help capture a larger audience than I might have with rap alone. I’ve also diversified my bonds by starting a rock band, The Pissed Off Wild, or P.O.W. for short, worked with Sleep to form an unstoppable Hip-Hop duo called The Chicharones, and have reinvented myself as a sex symbol because I really wanted to get laid more.  Also, underground Hip-Hop was getting extremely depressing with it being mostly nerdy guys with bad breath and free weed and it lost a lot of the excitement I grew up loving about it. I also run a record label, Camobear Records, which has released 20 albums so far, including the latest Martinez solo album as well as albums from The Gigantics, Awol One, Moka Only, Evil, and many others. When I watched CD sales fall apart I started a publishing company to make sure we licensed our artists’ music to the wider world, including spots in movies, TV, action sports videos and video games, which now makes up a big part of our business. Not only am I a sex symbol, but I polish my loafers like a stockbroker on his way down the collapsing staircase of infamy. All Balls!

AB: Wow, you covered a lot there. Let’s start with the ten years on tour.  Do you even have a “home” at this point, or is the road it?
JM: Portland, Oregon is my current home, but currently I’m in a hotel in New York having flown in from three weeks of touring Europe, playing France, Greece, Austria, Germany, Croatia and Ireland, and now I’ve got five days in the big apple doing shows and attending the CMJ music conference, then its home for two days, then back out every weekend til x-mas doing fly-ins, which means I’ll be doing three or four shows in a region then going home to the office to work and make sure the businesses stay stable til the next weekend when I leave again. It’s a retarded life and a lot of work and no woman worth her salt would want anything to do with me due to my infrequent time spent being home and of course my philandering ways due to the recent conversion to being a sex symbol. Eventually I’ll flame out, covered in fading tattoos and new STDs, riddled with guilt and shame, but for now, I’m all sex, no condoms. All mustache no responsibility, you might say.

“Touring is the only vessel that an artist can legitimately claim to be worth it every time.”

AB: What are some of the pros and cons of such a road warrior lifestyle?
JM: Touring is the only vessel that an artist can legitimately claim to be worth it every time. Every time you play a show you connect with fans, foes, hoes and fake bros and that’s how you build a rep. For those of us not paid to spend two months fucking underage girls on the Warped Tour by a major record company you need to be creative and fully committed to getting people to hear your music. Unless you want to stay underground forever you have to hit the road and build a fan base the old fashioned way. Through hard work and touring I’ve spent the last nine years becoming a household name in Iceland and Maine and a few other places I’d rather not name. It is killing me a little bit every night I sleep on some promoter’s couch, sleeping next to his recently deceased cat, inhaling ashtrays worth of cigarettes in cramped damp rooms, drinking diarrhea draft to wash down the loneliness, traveling ten hours a day to get to a new town that looks identical to the last town, having someone yell in my ear about how good they freestyle. Sometimes I’d really like to take a vacation and disappear for awhile, but like they say, I’ll have time for that when I’m dead.

AB: Thankfully you’re alive and well. In fact, you have a new album out, The World Famous Sex Buffet.  What kind of plate do I need for this kind of buffet and what delicacies am I in store for?
JM: Get ready for the mustache ride of your life. The Sex Buffet is my attempt at making indie Hip-Hop sexier, more risqué, taking some chances and making music fun again. It’s not all doggystyle and barebacking as while the title is humorous the music is intended to be challenging – a complex relationship between wanting to grow up and be a man and wanting to stay young forever before Peter Panning out. I’m really proud of the record as it happens to have some of my favorite rappers in the world on it; Devin the Dude, Awol One, Pigeon John, Sleep, and Mother Mother, a massively dope Canadian indie band, and it will be remixed and tinkered with over the next few years to squeeze the last drops of goodness from it. Pearl necklaces for all involved. Plus the production on the album benefited strongly from the healthy contribution of the Canadian government funding to make the record. We spent a lot of time in big studios, hiring Phil Collins for some drum work, bringing in Cece Peniston for some hooks, and generally spending money like coke dealers on a tear.

AB: Man, why’d you have to mention CeCe Peniston. Now I’m gonna have to go look up “Show Me Love” on YouTube and watch it again. Back on the topic of the album, what inspired the title?
JM: The Sex Buffet is a posse of my best guy friends who joined me on the road to have fun and keep me company as we played festivals and enjoyed VIP treatment all over the place. With names like All U Can Eat Pete, The Mustache Kid and Blue Balls Lou Rawls, we had an incredible time, pushing the boundaries of good taste and good times and quite frankly they kept me sane and happy in my travels. (For the album) I decided The Sex Buffet could be a more inclusive posse and let the world in on the good times.

AB: Musically, what makes The Sex Buffet different from your previous Hip-Hop related efforts?
JM: Its got way more live instrumentation, more guests, much stronger production, and the benefit of a lot of studio time to get the job done right. The album took almost five years to make and so I’m glad it’s finally done and getting out there. For me, I’ve been so sick of these songs from over-listening that I’m just glad it’s out and can be judged by my friends in the outside world. Judge me you little fucks!

AB: You’ll note I said “Hip-Hop related” in the last question because I know you delve into other genres of music, so tell me, what do you feel you can express through Hip-Hop that you can’t through any other genre?
JM: I borrow so heavily from all forms of music, unabashedly, so at this point Hip-Hop is just one of the tools I’ve been using to get messages across. I’m really proud of the songwriting on this album, the idea of songs moving from one place, with lots of movement, and getting you somewhere, sometimes where you least expect it. Hip-Hop is such a storyteller’s vessel and I feel I’ve always tried to focus on storytelling, it’s only recently that I’ve been able to move forward with singing and live instrumentation, doing a fair amount of production to help take the record from a rap record to a musical album. I’m proud like a dad whose son lost his virginity at whorehouse.

AB: Finally, other than the image you just painted, who, or what, inspires you in 2008?
JM: My favorite band right now is Kings of Leon. I love rock music now, it just hits me hard. I listen to a lot of old doo wop groups, rocker’s reggae, 70’s classic rock and I love the HBO show Flight of the Conchords. Meerkat Manor, a Discovery Channel show, lights my world up on the late night. Watching those little bastards running all over the place gives me a small boner and one day I hope to raise a posse of them in exile and take them to the Serengeti to punish Hannibal and those mean little commando bastards. Being an adult inspires me these days. Earning a fair wage for hard work makes me feel valuable as a human and living in the USA when Barack Obama will most likely win the presidency excites me like few things have in the past. It won’t change things dramatically, but it sure as hell would be nice not to be embarrassed by America so much anymore. Also, handjobs are a big inspiration. It’s been so long since they were on the front burner that now I’m really into them as well as dry humping, which is all a matter of what kind of pants you’re to be wearing. Take my advice, keep em loose, avoid button flys, and keep it going for less than ten minutes. No one likes lesions.