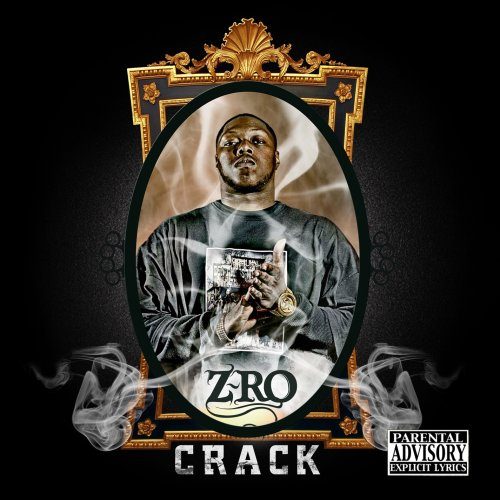 Retelling Z-Ro’s many woes and tragedies could take up this entire review. Listening to any of his CDs makes you want to relate those somber tales, but ultimately the experience that is Z-Ro’s music can never be properly conveyed in words. Z-Ro is a modern day bluesman and folk tale purveyor. Sure, Z-Ro’s stories are rooted in the truth, but his music has the qualities that will ensure his tales will one day take on a life of their own. Aside from never being able to catch a break, Z-Ro’s soulful sing-song raps and his preference for being alone make for quite an appealing persona. “Crack” is the latest album from the self-proclaimed Mo-City Don and maintains the high level of quality Z-Ro fans have come to expect. This time around Z-Ro doesn’t handle as much as the production as he did on his last mixtape/album so the music has stepped up a notch. Lyrically, it’s near impossible for the man to make a bad album. Hopefully, “Crack” the CD will catch on like the drug from which it derives its name.

The album kicks off with a 3 minute intro featuring Z-Ro doing a little talking before getting into the verses that made him famous:

“I tried to beat my felony but I lost that case
Oh well, I went to jail and I lost that way
Met a couple of dime pieces, but I’m true to one woman
I can spot a devil with breast when I see one coming
What’s the matter? Y’all acting like y’all mad I’m free
Like to see me suffering is what you’re glad to see
Newsflash, I ain’t been doing bad in so long
Making money in prison like I was still at home
Bought a few more vehicles and super-sized my house
Made a call to Paul Wall and he redid my mouth
I know you wonder why I’m the most hated rapper down south
I’m so deep, they can’t reach what I be talking about
With the same size foot you couldn’t fill these shoes
You ain’t gotta be a crip for you to dig these blues
Where the playa haters at? It’s time to hate me again
Same pistol gets dusty, but off safety again
Same snub-nosed trey five seven, ain’t nothing changed
Looking for no trouble, just protecting my brain
Don’t want me to reach out and touch you, stay out of my range
If you don’t give me a reason I ain’t going to murder you man”

Z-Ro is definitely bringing the heat and even has a more uplifting world view on this album. The intro drops into some of the more commercial tracks on this album. “Baby Girl” is a love song, but Z-Ro has always been known to lament about his troubles with the ladies. This time around he isn’t sulking about a break-up, so this song is a welcome addition to his repertoire. “Here We Go” is a hard street track meant to put haters on notice that Z-Ro is out of jail and back. As is always the case with Z-Ro, he may or may not be locked up currently, but the song was recorded in the short stint of freedom he had between bids. “Call My Phone” is another track dedicated to the haters, but this time Z-Ro focuses on groupies who are only interested in his money. “If That’s How You Feel” may feature the album’s dopest beat with its blaring horns and funky drum track. Z-Ro drops a stellar hook which could make this a radio hit but allows Z-Ro to maintain his integrity:

“If you want to dance to this, dance if that’s how you feel
But my body don’t move like that, so I’ma chill
I’ma play the wall, leaving all the dancing to y’all
But we can party til somebody call the law”

On this album Z-Ro does a nice job of mixing songs that could reach the radio with songs more inline with his traditional street style. “Lonely” finds Z-Ro lamenting on his love troubles and preference for being alone. “Made” is a slow, pounding street banger celebrating Z-Ro’s status as a “self-made millionaire.” “Mo City Don” is a lush, soulful song dedicated to Z-Ro’s hometown and his life. The album doesn’t let up towards the end. “Eyes on Paper” samples a dope Scarface line for the hook. “25 Lighters” find Z-Ro being chopped and screwed for a 9 minute track in the spirit of the original Screw tapes. “Paid My Dues” finishes things up and features a sparse beat reminiscent of some of the Guerilla Maab’s earlier work.

Another year and another dope Z-Ro album. Outside of a few semi-average releases early in his career and a lot of unauthorized Z-Ro albums, the man has been quality throughout his career. Actually, you can thank Rap-A-Lot for saving Z-Ro from the small labels and wack beats that plagued him early in his career. Starting with “The Life of Joseph McIvey” Z-Ro has been nothing but musical dope. This CD shows Z-Ro maturing a little more and learning how to walk the fine line between mass appeal and street appeal. If Z-Ro can perfect that aspect of the game, he should be a breakout star in the near future. Even if he doesn’t learn to make radio hits, the man has enough fans to guarantee a long and prosperous career.