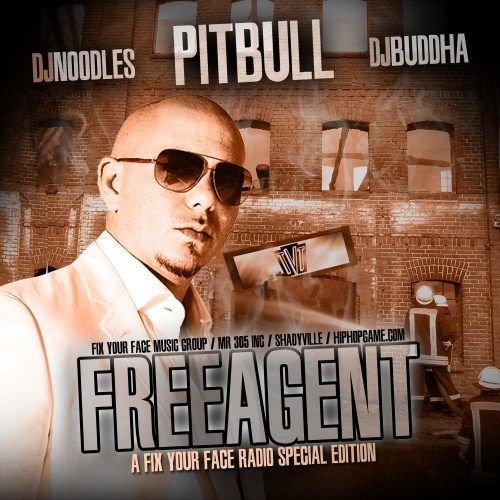 The deluge of mixtapes these days is such that calling them a dime a dozen wouldn’t even begin to capture it. Whether it’s any one of the self-proclaimed Best Rappers Alive or MC Such-And-Such, you can be assured that they are flooding the mixtape market to push their official products or simply to generate buzz as they bid for greater recognition. Pitbull sits somewhere in the middle of this pack. He is already a world famous rapper with several hit singles under his belt, but he has found himself in an awkward situation due to label issues with TVT. What was that rule Q-Tip warned about?

Anyway, with TVT going bankrupt due to a lost lawsuit with Slip-N-Slide over some old Pitbull recordings, Pit now sits a free man trying to maneuver his way into a new, better deal. Hence the “Free Agent” mixtape presented by DJ Buddha and DJ Noodles and featuring the likes of Bun B, Murphy Lee, Kud Cudi, and Red Cafe.

There have been a number of compelling mixtapes put out the past few years. The Clipse and their Re-Up Gang compatriots released three heralded installments of the “We Got It For Cheap” series; Lil Wayne had a rambling masterpiece or two put out by those “mixtape DJs” who have it out for him; and Royce da 5’9’s whole career has consisted of stellar mixtapes of late. What all of these shared was a keen ability to pick good beats that were neither too obscure nor too obvious and that could be wholly owned by the rappers trying to reinterpret them.

Pitbull’s latest has none of these virtues. It’s not a bad release, per se, but it suffers from the typical mixtape fate of being too much of everything all over the place. The beats he chooses to rap over, while almost all good, fall into a few disappointing categories. One of the largest is that of beats that have already had their fare share of rappers on them. Songs from Pitbull like “A Milli” and “Got Money” are both decent enough, but I’m pretty sure we’ve already heard everyone and Jay-Z’s mama over those beats. And did we really need another rendition of Jigga’s “Roc Boys”? Pitbull does a passable job, but it makes you wonder. Another group of songs struggles under the weight of the songs they sample. “Come With Me” might be good enough on its own merits, but it’s damn near impossible to hear it and not intrinsically long to hear Tupac instead of Pitbull due to the beat-jacking of “Hail Mary.” The same can be said of Nas with “I Made You Look” and Jay-Z (or even Royce) with “A Million and One Questions.” One revered beat which comes off well in its new form is the Fugees’ “How Many Mics,” reinterpreted as “Art of War.” Pitbull’s double time flow switches it up enough to distract from the fact that you expect to hear Wyclef on there, and the dark subject matter is well in line with the eerie beat.

Because of these missteps in the choice of beats, Pitbull feels like a voyeur on many of these tracks, unable to subdue them to his will. When the music works for him, though, he proves himself a capable MC with some decent things to say. Granted, a mixtape is generally not the forum in which to expound on your worldview, but even the righteous anger against TVT and its owner Steve Gottlieb is well and cleverly conveyed. His cover of Estelle’s “American Boy” succeeds despite all the reasons why it shouldn’t, as Pitbull raps about “how Bush tore the country apart” and gives standard fare interpretations of W’s cowboy diplomacy. He doesn’t say anything particularly new or incisive, but the effort is much appreciated and it somehow works with the syrupy sweet musical backdrop. Other effective songs include the cinematic “We About That” and the bare-bones drum slaps of “Can’t U Tell” featuring Red Cafe, Hot Rod, Trazz, Murphy Lee, and Jay Rock. Pitbull’s narrative of coming up through the dope game is enlightening for its archetypal qualities, and the other MCs hold up their end of the bargain as well.

There isn’t a lot to really complain about here with all the classic and well known beats on display, but neither is there much to write home about. As mixtapes go, this one is slightly above average due to the mic presence of the MC and a solid musical line-up. However, along with the “average mixtape” tag comes a host of other problems that drag the project down, the foremost being a lack of originality in beat selection and use. The “Free Agent” mixtape succeeds as his opening statement to the market he hopes to conquer, but it fails on any scale grander than that. With his label woes behind him, hopefully Pitbull can focus his talents on bigger and better things than the mixtape format allows. I know I’ll be listening.