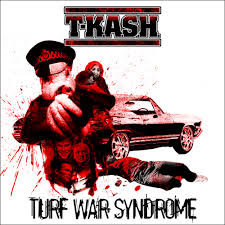 It seems that all the “new” political rappers who have emerged in the last few years are not new at all. Wise Intelligent and NY Oil have all been around for years. T-K.A.S.H. is also a veteran of the game. Having put in work on The Coup’s “Steal this Album,” “Steal This Double Album,” and “Party Music,” T-K.A.S.H. has been grinding in the bay for years. His debut album comes in the form of “Turf War Syndrome” and is released on Guerrilla Funk, the label of another famous political rapper, Paris. Having Paris to produce and distribute his album certainly does not hurt T-K.A.S.H.’s chances to make a mark in the game, but it is T-K.A.S.H.’s talent that makes the man such a force in the rap game. Craftily weaving a positive and political message in his hardcore street rhymes, T-K.A.S.H. shows us he’s capable of reaching the masses without compromising his ideals.

T-K.A.S.H.’s style is in full effect on “American Nightmare” where his street savvy political raps are on display:

“It’s the return of the niggas with four-fives and hollow-tips
Mobbing in the whip with camcorders to follow pigs
The return of role models and watching kids
Smashing on them for trying to be on the block and shit
The return for truce time and conferences
Another level that’s far beyond ‘consciousness’
The return of dope dealers who smoke niggas
Taking time out to find out: Why we going
Dumb in the first place? And how we
Make a better way up out the worst way? It’s the
Return of gangster ceasefire, plans to reach higher
Just like a CEO with plans to retire
Return of the neighborhood baby-mama trust fund
When baby-daddy get knocked, you hustle up one
It’s the return of thugs who come undone
With drug runs and busting guns at loved ones

It’s the return of the niggas that’s down to beat a woman
Getting shot up in the dick ’til he bleed like he a woman
You got to let a ho be a ho, a bitch is a bitch
Regardless, that ain’t no way to treat a woman
Return of the hoodnik, it’s free food
For the families where the hood is
You integrate the bad kids with the good kids
And teach them all who President Bush is
It’s the return of the fast food boycotts
All cultures from Tabasco to soy sauce
The return of thugs who unplug the Playstations at night
And check for toy guns in their little boy’s toy box
The return of the young gang member
Done with gangs forever to change for the better
The streets run cold but your brain is the sweater
And ain’t nobody else going to bring it together”

The man’s flow is impeccable and his deep booming voice is perfect for delivering hard-learned street lessons. “Made In America” is a new take on a classic beat as T-K.A.S.H. condemns the criminal lifestyle forced upon many minority males in the United States. “In My Drawz” is G-Funk right down to the smooth hook and features T-K.A.S.H. flipping the script on the typical “that’s why I carry my nine” gangster track. “How to Get Ass” is not what you think as the track is a revolutionary call to arms and condemnation of the president and the hook declares “this is how to get assassinated.” “Last Real Hustlers” and “Hustlematic” continue the street smart political music as T-K.A.S.H. shows love to the hustlers but keeps things positive. The album closes out with a long version of “American Nightmare” with the difference being an extra verse from Boots Riley of The Coup.

T-K.A.S.H. is able to walk a fine line few rappers have been able to walk. His music has a real gritty, authentic, and hardcore street vibe to it. This vibe in itself is becoming increasingly rare, but T-K.A.S.H. is able to infuse a positive, political, and revolutionary message into his music. This balance is usually reserved for veterans and legends like Paris, Scarface, and Ice Cube. Obviously it is too early to tell whether T-K.A.S.H. will ever reach such lofty levels in the rap game, but “Turf War Syndrome” is a very good start. It appeals to all rap fans as neither the gangsta or political element are overbearing. Hopefully, this is only the first of many releases we’ll get from T-K.A.S.H.